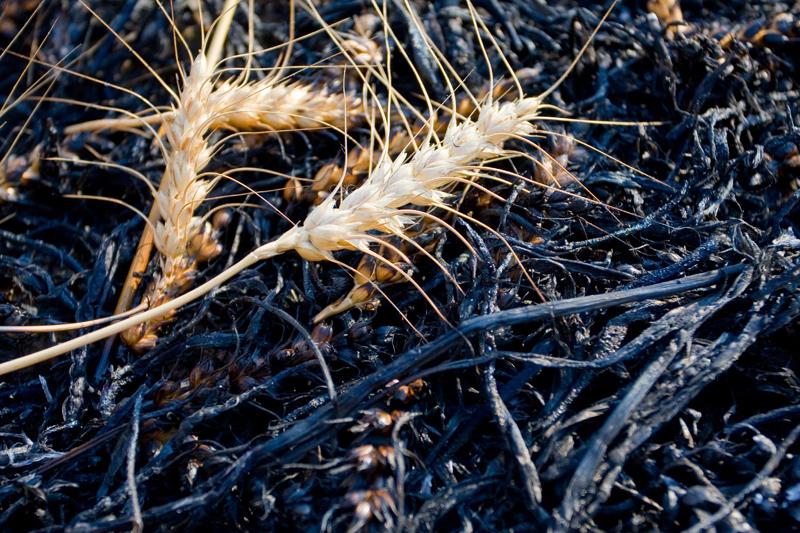 After years of deprivation and financial turmoil farmers across the most fertile parts of Syria and Iraq were looking forward to a much-needed return on their investment. Unfortunately, before that could happen, their hard work went up in flames, literally. The devastation and pain that these fires have caused a countless number of families is heartbreaking and immeasurable.

I spoke with a Qamishli resident under the condition of anonymity, on June 17th about the recent wheat and barley crop fires in his region and he had the following to say, “If you were to come to Qamishli right now, you would not be able to smell anything but the fire. I get up in the morning and there’s ash covering my entire car, from the crop fires. The entire region has been affected, people’s livelihoods have been destroyed, people are confused and upset, and the fires are spreading beyond the fields and into towns, many families are suffering right now. Have you seen the size of the flames? They can’t be contained. There are birds that were killed, they couldn’t escape from the fire. Imagine that, they have been photographed sitting, some protecting their nests, completely burned alive.”

I asked about fatalities, he said “Over 25 people have been killed so far.”

When I asked who owns the land and who would have a motive to do this he answered, “The majority of the lands that have been affected were owned by Arab families, not Kurds.” He also said, “75% of the people here think the Kurdish militias are responsible because”.

Laith Marouf, Senior Consultant of Community Media Advocacy Centre (CMAC) stated on June 14th, “For the past month, Kurdish Contras in Syria implemented a scorched earth campaign against Arab and Assyrian farm lands, with 100s of acres of crops burnt to the ground in an effort to force the majority population to accept Kurdish minority rule and occupation by the Empire. Yesterday, as a follow up to this campaign, Saudi sent an envoy who has toured the areas along with the US ambassador offering money to Arab and Assyrian tribal leaders, now hungry and financially ruined after their annual harvest was destroyed, in return for their allegiance against their homeland.”

When I spoke to Laith on June 17th about allegations being made against Turkish militias for the fires on Turkey’s borders Laith stated “Fires started first in regions close to the Euphrates and Khabour rivers. Only in past few days fires started in border regions with Turkey”.

In 2017, when Daesh lost a significant amount of territory in Iraq and Syria including Mosul, Palmyra and Raqqa, the terrorist group took on a campaign of mass destruction and sabotage. Their goal was to destroy anything of value including priceless artifacts, factories, buildings, oil wells, water wells, electricity, sugar and cement factories and burning crops. Their aim was to inflict as much economic turmoil as possible on not only the governments but the civilians that lived in these areas.  This led to what has been referred to as Daesh’s “scorched earth policy”.  The idea is simple, if they can’t have something, then no one else can either.

With these recent crop fires however, there could be multiple culprits that are using this opportunity to further their own destructive plans while Daesh or sleeper cells takes the entire blame. Even though Daesh has claimed responsibility and has called for their followers to continue to burn crops and cause the “apostates” to suffer, other parties have motives as well.

The Kurdish self-administration has blamed the Syrian government along with Daesh, for the fires. Salman Barudo the head of Kurdish administrations agriculture committee stated, “We cannot say the regime and ISIS are working together, but they share the same interest in not seeing the success of this area”.

Ironically, we have proof that SDF has not only worked with Daesh and other terrorist groups during the war, but has used Daesh war tactics such as kidnapping and forced conscription.

Some have alleged that Iran was responsible for the fires in Iraq, implying that they were trying to force the Iraqi government to buy Iranian wheat. Syrian Opposition groups have blamed the Kurdish led, US-backed Syrian Democratic Forces or SDF. And the blame game continues.

Amidst all the allegations, (some more ridiculous than others) the simple fact that certain parties aside from Daesh, have much to gain from these terrible acts remains. They can only hide behind Daesh for so long before the responsible parties are fully exposed.

Earlier this month, Syria’s Ikhbariya state TV journalist and correspondent Muhammad as-Saghir was detained by the SDF after filming wheat fields on fire and obtaining evidence that the SDF was not in a hurry to put them out. He also stated that the SDF was seeking to destroy Syrian wheat stocks as a means of furthering the US economic war against Damascus.

Given this information, it appears that crop fires are part of Washington’s next phase of economic warfare/terrorism (in addition to the existing harsh sanctions), being imposed on war-ravaged Syrians who have courageously fought against western-supported global terrorism, within their borders for over eight years.

‘Never Give In’ is part of United’s DNA: Solskjaer