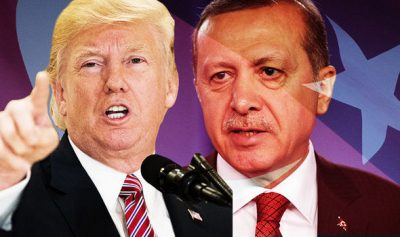 In response to delivery of Russian S-400 equipment to Turkey days earlier, a White House press release said the following:

“…Turkey’s decision to purchase Russian S-400 air defense systems renders its continued involvement with the F-35 impossible” — despite Ankara’s partnership in the program.

Its defense contractors produce around 900 F-35 parts. Turkey earlier made a downpayment for planes it contracted to buy. The Pentagon has been training its pilots to fly them.

Turkey’s Foreign Ministry said expelling its military from the F-35 program “is incompatible with the spirit of alliance and does not rely on any legitimate justification,” adding:

US war department deputy undersecretary for policy David Trachtenberg said upcoming NATO exercises in Georgia will include Turkish forces as planned. It’s unclear if F-35s will be involved.

Ankara is officially “suspended” from the program, reinstatement to come if it abandons S-400s, what’s highly unlikely.

Turkish pilots and other personnel involved in the F-35 program will leave the US at end of July, according to former Textron Systems CEO Ellen Lord, serving as Pentagon acquisition chief.

Moving the program’s supply chain to other suppliers will cost up to $600 million, according to Lord, perhaps double or triple this amount, given enormous Pentagon waste, fraud and abuse, massive cost overruns standard practice, accountability never forthcoming.

The White House statement expressed Trump regime sour grapes over Turkey’s refusal to bend to its will on this issue — what the US demands from all other countries, clearly from NATO members.US Threatens

Some congressional members demand imposition of sanctions on Turkey — for exercising its sovereign right.

Turkey is the first ever NATO member to buy sophisticated Russian weaponry – infuriating Washington for defying its will, along with losing major multi-billion orders for Raytheon and Lockheed Martin, producers of Patriot missiles and F-35s respectively.

Russia’s sophisticated S-400 air defense system reportedly can track and down the West’s most advanced warplanes, including US stealth F-35s.

Is that reason enough to ban Turkey from purchasing the planes? It chose Russia’s state-of-the-art S-400s over less capable US Patriot and Terminal High Altitude Air Defense (THAAD) missiles.

S-400s operated by Russia, not Turkey, threaten US air superiority though are only intended for defensive purposes.

The Russian Federation never attacked another country preemptively. It threatens none now.

Its summer 2008 intervention in South Ossetia countered US-orchestrated Georgian aggression against Russian nationals, its forces deployed to protect them.

On July 12, acting Trump regime war secretary Mark Esper told his Turkish counterpart that Ankara “can either have the S-400 or the F-35. You cannot have both,” adding:

“Acquisition of the S-400 fundamentally undermines the capabilities of the F-35 and our ability to maintain that overmatch in the skies going forward.”

S-400s operated by Turkey do nothing of the kind — unless the US attacks the country militarily, a NATO member, clearly ruling out the likelihood.

Expelling Turkey from the F-35 program perhaps will get President Erdogan to buy Russian Su-35s, a likely superior choice given the problem-plagued US warplane, more advanced on the drawing board than in operation.

On Thursday, a Turkish military source said “(i)t is still premature to talk about (the country) purchas(ing) Russian Su-35 fighters. Our president will assess this important topic. He will also make a statement.”

According to Aviation Today, the F-35 program was almost cancelled in 2011 because of “the bloated, over-budget and” failure to stay on schedule.

Cost of the program is estimated at around $1.5 trillion over its multi-decade lifetime. Given dubious Pentagon accounting, it could be hundreds of billions of dollars more, maybe double the above estimate.

According to documents obtained by Defense News, the aircraft is still plagued by unresolved problems, some major, putting pilots at risk, and compromising its effectiveness.

By the Pentagon’s own admission, the program is “troubled” by production problems, excessive cost, delivery delays, and unresolved technical challenges.

Recently stepped down acting US war secretary Patrick Shanahan expressed frustration about the program, calling it “f…ed up.”

It may turn out to be the greatest weapons boondoggle in world history by far, perhaps never fully fulfilling its promise — while Russian super-weapons maintain superiority over the West’s best at far less cost.