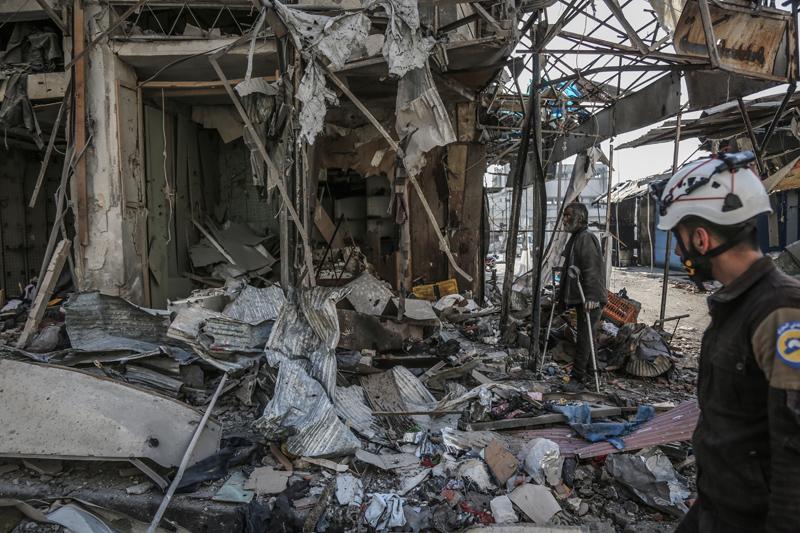 Where is the other half of the Syrian conflict coverage? CNN’s Arwa Damon and BBC’s Paul Wood chose sides

CNN correspondent Arwa Damon came to Syria illegally many times, as a guest of the armed fighters, even when the Free Syrian Army (FSA) no longer existed, and only Al Qaeda was in control of Idlib.  She referred to Idlib as a demilitarized zone, but failed to explain the Russian-Turkish agreement stated that Al Qaeda and ISIS and any other UN recognized terrorist group could be hunted, bombed, attacked and killed by any method.  Arwa tried to make you think that the Syrian-Russian bombardment of Al Qaeda positions was illegal.  In fact, the UN states that every country must fight to kill Al Qaeda and ISIS wherever found.  CNN correspondent Fred Pleitgen has visited Syria many times and does so legally with a Visa from the Syrian government.  Arwa would have you believe she has to be smuggled into Syria because they don’t give Visas, and that is untrue.

In any conflict you have at least 2 sides; however, the western journalists inside Syrian portrayed one side.  They made the FSA, aka ‘rebels’, into heroic freedom fighters.  At the same time, they admitted the FSA were sectarian.  The FSA never once mentioned any certain person as their chosen leader to support after the revolution had finished.  Western journalists should have asked: what is the new Syria they want to create?  They were told time and again the fighters only wanted to cleanse Syria of all non-Sunnis, and yet persisted in their portrayal of the fighters as wanting democracy.

The FSA was the armed wing of the Syrian National Coalition (SNC), located in Istanbul. The western journalists never mentioned that the SNC was formed entirely by members of the Muslim Brotherhood, which is a banned terrorist group in many countries.

It is unethical for journalists to present one side of a story, and never present the full story in all aspects.  Journalists are to be neutral observers, gathering facts, and presenting them in a balanced and truthful manner.  Reports from areas under government control would allow readers to know about the churches, schools, hospitals, clinics, mosques, homes, and shops destroyed by the rebels, and the massacres the rebels committed.

Western journalists have been in Syria for 8 years of the conflict.  Some followed international law and applied for a Visa to enter Syria legally as a journalist.  Others chose to enter Syria illegally as the protected guests of the armed terrorists they called rebels.  Being the guest of Radical Islamic terrorists, fighting a revolution in order to establish a sectarian state, strips away any chance at being a neutral observer.  These intelligent western media professionals allowed themselves to be cheerleaders for terrorists who raped, kidnapped, maimed and killed unarmed civiliansacross Syria.

They kept calling them ‘activists’ instead of armed fighters, even though they consistently referred to their weaponsand the fact they were killing Syrians daily.  Government hospitals were accused of crimes against injured rebels, but no proof was given.  This was a deliberate demonization of the Syrian government side of the conflict.  Paul Wood is very concerned about journalists who have died covering the Syrian conflict; however, he never mentions the fact that more Syrian journalists have died covering the conflict than western journalists.

Western journalists bought the story without question.  The key to a successful revolution is the support of the people.  This was the reason the Syrian revolution failed.  There was a minority of Syrians who supported the FSA, either ideologically or by taking up arms; however, the majority of the people remained secular, and steadfastly against armed violence.  The majority rejected political headquarters in Istanbul, Doha, or Riyadh.

Many Syrians who left as migrants were not leaving as a political statement of rejection of the Syrian leadership but were fleeing war and looking for an income, which Germany and Sweden were openly offering.  Had the Deraauprising in March 2011 been organic, with the support of the majority of the people, it could have been successful within the first six months.  The Syrian Arab Army is made up of Syrians from every sect, and the majority is Sunni Muslims.  Had the people supported a revolution the Army would have broken apart, but this never happened.  Syrian society has been ingrained with secular political ideology for 40 years, and that kept the country united against the prospect of civil war.