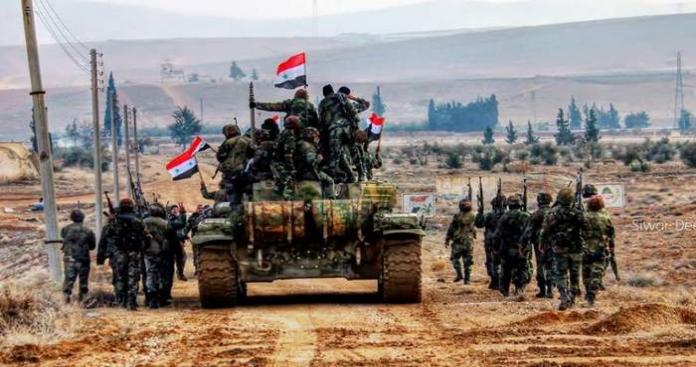 Syrian Arab Army units managed to restore two strategic posts in the northern Hama countryside after fierce battles with the terrorists killing over 50 of them.

Tal Meleh hill and the town of Jibeen are now clean from terror, once again, from terrorists loyal to Receb Tayeb Erdogan, the Turkish pariah, and Caliph wannabe. The terrorists killed rank under Nusra Front aka HTS (Al-Qaeda Levant), and so-called National Liberation Front, both radical terrorist groups and both are commanded by NATO member state Turkey.

The terrorists carried out a counter-attack in order to retrieve the two posts and collect the bodies of their comrades from the battlefields, the counter-attack cost them more bodies piled up on the ground and a clear defeat by the SAA.

SAA brought in more reinforcement to the posts to fortify the positions there in anticipation of new attacks by the terrorists with support from Turkey.

The two terrorist groups carried out an overwhelming heavy attack against the SAA last June when they managed to take over the two posts from the SAA which withdrew to regroup. NATO does not have any value of its terrorists that’s why they push them for each battle in very large numbers and the suicide terrorists themselves are happy to fertilize the land with their filthy bodies.

Turkey, and the USA behind it, do not want to give up the last terrorist stronghold in Idlib easily hoping for some gains in the future of Syria in order to pressure the Syrian state to guarantee the security of Israel, the Syrian people, on the other hand, prefer to continue the fight to the end and never grant such a card to the aggressors for their beloved last apartheid regime in the world.

The battles continued today with more achievements by the Syrian Arab Army detailed in our earlier report: SAA Eliminates a Number of Nusra Front Terrorists Northwest of Syria