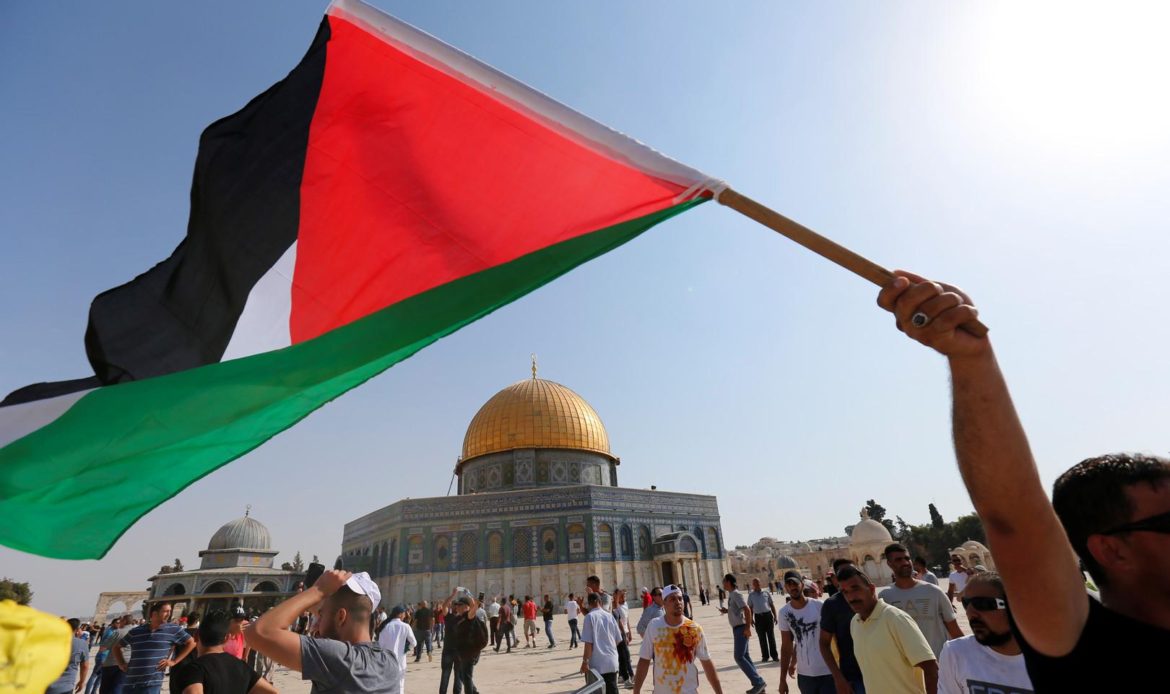 The continuing denial of rights and justice to the Palestinian people

The right of resistance to occupation, by the Palestinian people, is grounded in international law.  Freedom-loving people of the world must remember the words of Nelson Mandela:

“We know too well that our freedom is incomplete without the freedom of the Palestinians.”

“Israeli” prisons hold about 5,700 Palestinians, including a large number of children.  In 2018 over 800 Palestinian children were arrested.  Those children are denied the right to telephone their parents by Israeli Supreme court ruling and are denied the right to education.  The “Israeli” Army routinely raids homes and neighborhoods in the vicinity of illegal Jewish settlements.

‘B’Tselem’, a human rights organization reports, that as of April 30, 2019, the “Israeli” prisons were holding 205 Palestinian children, which included 30 under the age of 16, and 1 under 14.  “Israeli” law allows prisoners to be held indefinitely without charge, or access to a trial.  ‘Defence of Children International’ confirms that about 500-700 Palestinian children, some as young as 12 years of age, are arrested, prosecuted, and convicted by the Israeli military court system, with a conviction rate of 99.74 %.

Kuwait, South Africa, and Indonesian presented a draft statement to the UN Security Council condemning “Israel’s” demolition of Palestinian homes near Jerusalem, and expressing that destruction undermines the principle of the UN accepted two-state solution.  Bulldozers and occupation soldiers had destroyed homes in Wadi-al-Hummus, to expand Jewish settlements, which are illegal under international law. However, the statement was shot down by the U.S. who refused to agree to the condemnation.

The Boycott, Divestment and Sanctions movement is a peaceful campaign promoting various forms of boycott against the occupier Israel.  The U.S. Congress, both houses, voted to condemn the movement, which seeks to end the Israeli occupation through non-violent means.

“What they don’t get is, this is precisely why civil society boycotts continue to grow; the abject failure of governments to hold Israel accountable,” wrote Yousef Munayyer on Twitter, the executive director of ‘US Campaign for Palestinian Rights’.

U. S. Representative Rashida Tlaib, the first Palestinian American woman in Congress, said, “I stand before you the daughter of Palestinian immigrants. Parents who experienced being stripped of their human rights, the right to freedom of travel, equal treatment. So I can’t stand by and watch this attack on our freedom of speech and the right to boycott the racist policies of the government and the state of Israel. I love our country’s freedom of speech, Madam Speaker. Dissent is how we nurture democracy.”

‘Breaking the Silence’ is an organization of soldiers who have served in the occupation army, and are exposing the “Israeli” public to the reality of life in the Palestinian areas. They aim to end the occupation, by swaying the public opinion in favor of justice, based on the realities on the ground.

“The Deal of the Century” presents an American solution to the conflict, which was the brain-child of Jared Kushner, the son-in-law of Pres. Trump.  Mr. Kushner has no political experience, but he has been successful in real estate. The economic portion of the deal was presented in Bahrain and was shunned by Palestinians, who felt it was just throwing money at a complex problem and was not comprehensive.  The political portion of the deal has yet to be revealed and is waiting in the wings until after the Israeli election in September.  If it is not based on the UN-sanctioned 2 state solution, based on resolution 242 it will likely not be accepted.

“Palestine and Jerusalem are not for sale and bargain. They are not a real estate deal in a real estate company.”, said Mahmoud Abbas, the president of the Palestinian Authority.

Nabil Shaath, a veteran Palestinian negotiator said, “The whole world is tired of the control of the United States. The world continues to change and form a multipolar dynamic. Today, Europe, China, Russia, and South Africa are working to form a multipolar world.”

The UN Security Council resolution 242, dating to 1967, embodies a vision where “Israel” and Palestine would live side by side within recognized borders.  The UN has always worked towards peace while using international law and UN resolutions as the framework.  They have called for all illegal settlement activities pursued by “Israel” to stop.  The U.S. has maintained their commitment to UN 242; however, over the course of many administrations it has become apparent that the “road map to peace” was not high on the U.S. agenda, and currently, the Trump administration has a different approach.  The diplomatic Quartet: U.S., Russia, EU, and UN don’t seem to be singing the same song, or even standing together on center stage.