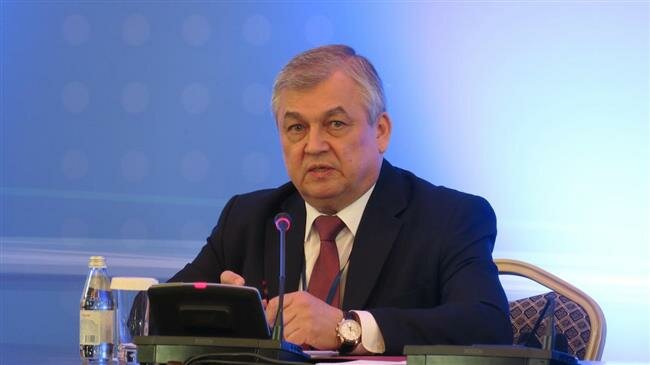 Lavrentiev: Terrorists in Idleb still attack civilians.. this is unacceptable

-Russian President’s Special Envoy to Syria, Head of the Russian delegation to Astana, Alexander Lavrentiev, affirmed that terrorist organizations in Idleb continue their attacks and provocations, adding this is unacceptable.

“We can evaluate the outcomes of the first day of the 13th round as positive in general… we discussed the situation in Syria, particularly in the de-escalation zone of Idleb and the need for combating terrorism there,” Lavrentiev said in a press statement on the sidelines of the 13th round of Astana talks on Syria.

The terrorist groups are besieging hundreds of thousands of  hostages and preventing them from coming out as well as they still making provocations against the Syrian army and attacking civilians, Lavrentiev added.

He went on to say that the talks also focused on the formation of a committee on discussing the current constitution in addition to means of making steps to accelerate the political process, reconstruction and the return of the displaced Syrians.

It also held a meeting with the Iranian delegation headed by the senior assistant to Iranian Foreign Minister Ali Asghar Khaji.

Idlib Russia Syria
Previous ArticleTrump orders more suffering on the Syrian civilians The only source of gasoline and electricity has been seized on US orders
Next Article Saudi Arabia, Zionist Entity Discuss Gas Deals’ as Ties Warm Up