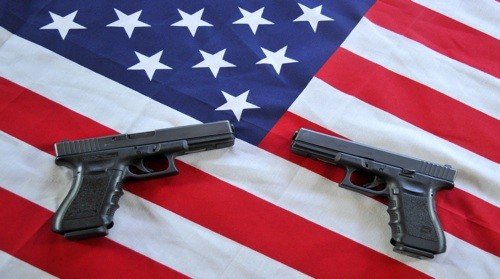 My 2 cents. I live in Syria. No one in Syria had any guns unless you were a police officer or a soldier. There were no holdups, no bank robberies, no home invasions, no school shootings, no angry neighbor shootings, no road rage ending with a bullet.

The French association of travel agents voted Syria as the SAFEST tourist destination in the entire Mediterranean region (that was about 2000). We had no crime rate. You can’t rob a bank with a kitchen knife, it needs a gun. I always felt safe. I was never afraid. I am originally from Fresno, California which topped the MURDER record of New York City in the 1970’s. I can recall that record! Syrian farmers have hunting rifles, for shooting rabbits or wolves, etc. City dwellers don’t usually have a hunting rifle unless they do take country hunting trips in season.

Obviously, since the war began in 2011, and the terrorists transported guns into Syria in mass amounts, there are guns everywhere.

However, I am talking about the fact that Syria was safe before 2011 because not every person had a gun. The only way USA can be safe is to limit guns to normal people, who have to qualify to be allowed a gun, such as not allowing a deranged mental case to own a bunch of guns.

That is common sense. Also, why does anyone need a military-style weapon which could be stolen by a criminal out of your home and then used to kill innocent people? Handguns and normal rifles in the hands of normal people should be good enough. This should be a choice for change by all Americans, and this has nothing to do with political parties.

Safety first above politics. The health and welfare of all Americans is a priority. We have made mistakes, and we can learn. We need to look at what UK, Australia and New Zealand have done. Research it to see if the plan worked and how it could be adapted to use in USA. Just some ideas….