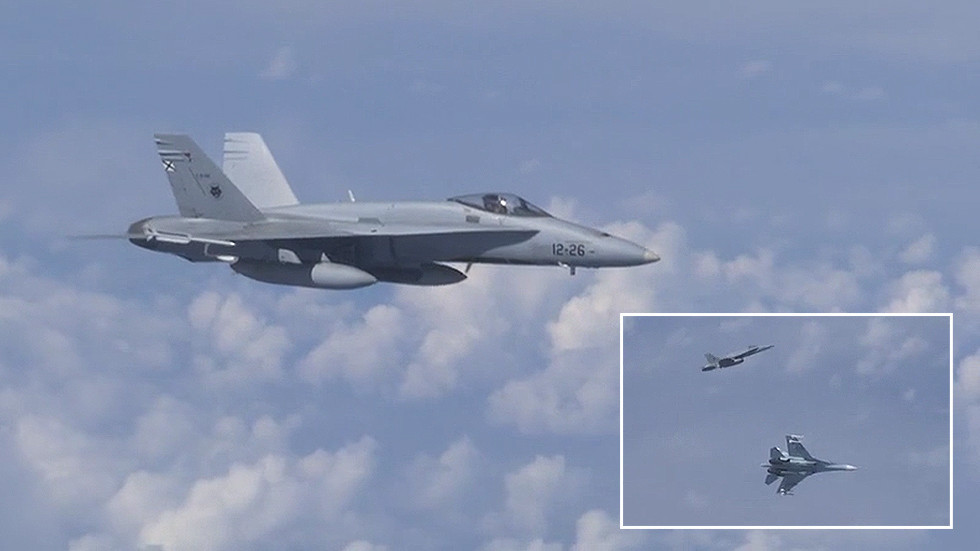 Sukhoi Su-27 fighter jets convoying a plane with the Russian defense minister on board chased away a NATO F-18 , which tried to shadow it over the Baltic Sea.

Sergey Shoigu was returning from Russia’s Kaliningrad region guarded by two Su-27 escorts, according to Zvezda TV, the television channel of the Russian Defense Ministry.

In MoD footage, a NATO war plane is seen approaching Shoigu’s jet, with the camera filming the F-18 up-close. Moments later, it swerves to the left as it’s chased away by the Sukhoi.

The Su-27 Flanker is a Russian fourth-generation fighter jet that has been around since the 1980s. The workhorse of the Russian Air Force spawned an entire family of military aircraft used throughout the world.

The F/A-18 Hornet by McDonnell Douglas is a multirole fighter which has been extensively used by the US and many of its allies throughout the years. The US fleet has been largely upgraded to the Super Hornet variant, but older aircraft are used by some of NATO’s European allies, such as Finland.

A similar air encounter over the Baltic Sea was reported in 2016, when Eurofighter Typhoon multirole fighter jets shadowed Shoigu’s plane. That time, the NATO aircraft kept at a reasonably far distance of about 2km from the Russian minister’s transport.

The same year, a Russian government plane carrying journalists to cover an international summit in Peru received what was later ironically called an honorary escort from the Swiss Air Force. This prompted a light rebuke from Moscow, while Switzerland, not a member of NATO, called it a routine identity check. President Vladimir Putin, who attended the Latin American event, joked about the incident.

EU NATO Russia
Previous ArticleIran Might be About To Change Its Approach Towards India
Next Article Bahrain to Purchase US Patriot System to Defend Against Aircraft, Missiles – Raytheon