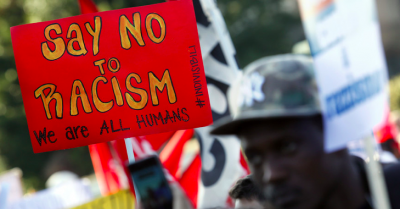 A new study published by McKinsey & Co on Tuesday found that one of the contributing factors to the U.S. racial wealth gap is the lack of banks in predominantly African American communities. Lack of access to mainstream financial services makes it difficult for African American’s to accumulate savings.

According to the Center on Budget and Policy Priorities the wealth gap is wider than the income gap but because incomes are easier to tax the income gap gets more traction in political discussions.

Let’s first differentiate between the terms income gap and wealth gap. Income gap refers to the gap in earnings between two groups such as the rich and the poor. The wealth gap however is about assets and net worth rather than just income. There’s also the racial income gap and the gender income gap but the bottom line is that the income gap has grown in the United States since the 1970’s.

The Mckinsey study mentioned above also states that expensive financial services such as check cashing counters are more prevalent in the absence of banks in minority neighborhoods. The report found that increasing access to basic banking services like checking and savings accounts could save black Americans up to $40,000 over their lifetime.

“”The key thing to remember is there is a knock-on effect as spending power leads to greater demand and new development, which creates a virtuous cycle. In this way, closing the wealth gap for Black Americans, positively impacts the wider U.S. economy too,”. He added “The $1.5 trillion investment represents the increased economic activity that we estimate will be manifested in housing, capital market investment and consumption.”

The topic of institutionalized racism, which is a form of racism structured into political and social institutions, comes up often in these discussions. Some claim that the growing racial wealth gap is strongly influenced by discrimination in institutions against minorities whether deliberate or unintentional and that in turn, limits the rights of minorities.

Others cite events such as the Civil Rights Movement in the 1950’s and 60’s, and laws such as the 14th Amendment, the Voting Rights Act of 1965, and Equal Credit Opportunities Act of 1974 along with legal cases such as Brown v. Board of Education as proof that racial inequality and institutional racism no longer exists in America.

“Today’s racial wealth gap can be traced all the way back to the enslavement of Africans and their descendants; the genocide of Native Americans and theft of their land and resources; and the enslavement of Indigenous Central and South Americans, and theft of their land and resources throughout the colonial and post-colonial periods. It was and is fueled by workplace discrimination and racial pay gaps and unequal access to education, among many other factors. So, throughout history, white people in the U.S. have been unjustly enriched by systemic racism while people of color have been unjustly impoverished by it. This unequal and unjust pattern continues today, and per the data, seems only destined to worsen unless race-consciousness policies intervene to make change.”

“Lack of financial services is just one indicator of racism and of the neo-liberal effort to make life as insecure as possible for as many people as possible. In fact, the ultimate goal is to displace black communities. There is no need for banks if black people are dispersed from the cities altogether.”

“It’s not true that African American communities have less access to mainstream banks. One of the large banking establishments that I worked for had a few offices in primarily black communities. I served in two of their locations and saw firsthand that the main issues were financial habits that were influenced by education and culture. I never witnessed institutional racism or racial discrimination from bank management towards clients. I had African American clients with diverse socioeconomic status, and I noticed that the ones below the poverty line often didn’t want a paper trail, they would cash their social security or disability checks and take the money home rather than keep it in a checking or savings account.” S.H. re-emphasized, “Accessibility to banks is not a big driving factor for the racial wealth gap, other factors play a bigger role, but Democrats like to use this talking point to further their political agendas.”

“increasing inequality is a source of increasing volatility, and wealth inequality means, when the economy hits a volatile patch, people don’t have the resources to withstand those shocks.” “That, in turn, makes the economy more volatile”, she added.

As the popular saying goes “when white folks catch a cold, black folks get pneumonia” in other words, when times are tough, the people with the lowest financial reserves suffer the most. Most Americans would agree that a racial wealth gap does exist, however, there’s some disagreement surrounding the main contributing factors and what can be done to decrease the disparity. Expect to hear more and more about this topic from politicians as we get closer to the next presidential election.