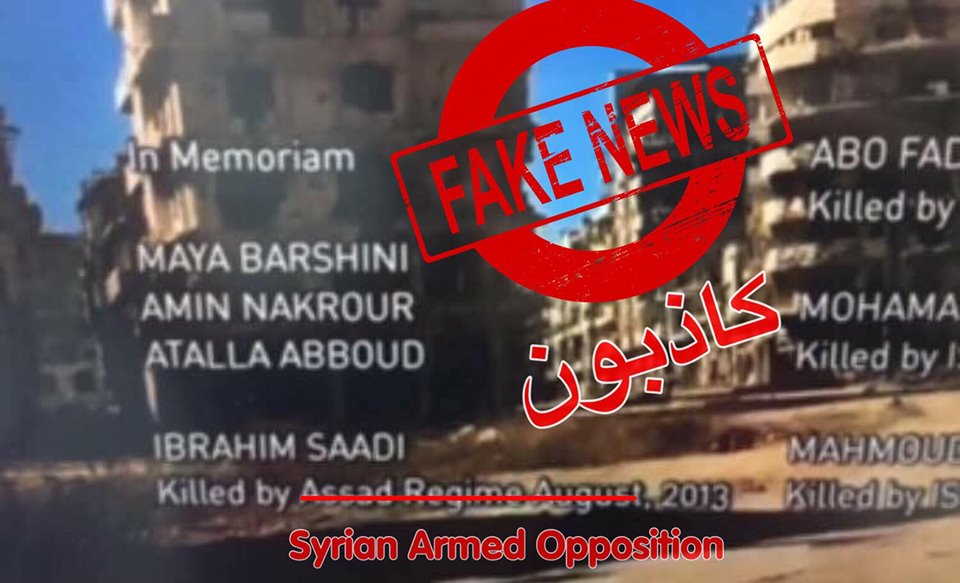 It has been six years since Manar Nakour’s brother died August 17, 2013, in Marmarita, Syria.  The hurt, loss, and shock came flooding back when he saw the National Geographic Documentary Films’ Hell on Earth: The Fall of Syria and the Rise of ISIS, by Academy Award-nominated filmmaker and best-selling author Sebastian Junger and his Emmy-winning producing partner, Nick Quested.

Manar was shocked to see his brother’s name, Amin Nakrour, and photo used in the film, prominently and emotionally used under the title “In Memoriam MAYA BARSHINI AMIN NAKROUR ATALLA ABBOUD IBRAHIM SAADI Killed by Assad Regime August, 2013” at the end of the film.

In reality, the events of his death, and those to blame could not be farther from the truth.  Award-winning filmmakers such as Junger and Quested would have researched those names and their deaths before dedicating them in such a bold and emotionally charged use of political propaganda.  If they had been named as having died in Syria during the conflict that would have been factual, but in this case, they were singled out to be the four smiling young people full of hope who were brutally slaughtered by the “Assad Regime”.  There was no attempt to obtain permission to use their photos, names, or the true cause of their death from their family.  The photos were taken from Facebook without any permission.  Stolen photos, and fabricated deaths to blame the Syrian government for a crime it wasn’t responsible for.

Amin Nakour, Maya Barshini, Atalla Aboud, and Ibrahim Saadi were attending a Christian celebration to honor the annual commemoration of “Mother Mary’s Day”.  The small village of Marmarita sits in the historic “Valley of the Christians” which is near Homs.  It was a hot August night, and party-goers were suddenly attacked by armed terrorists of the Free Syrian Army (FSA)  and their allies.  The four were killed when they attempted to flee the party in a car, rather than hunkering down at the venue with others.  The news appeared online on many websites and news outlets and could have been confirmed by a film fact-checker.  Instead, the story was fabricated into four young protesters killed by the government in street protests in the city of Homs, downtown at the clock tower shown in the video.  The true story was these four young dead persons were in full support of the Syrian government, as their only defenders in the face of sectarian terrorists of the FSA and their allies, who vowed to make Syria a Sunni Muslim State, and have targeted Christians and minorities for 8 years. It was the FSA who invited their brother-in-arms the Al Qaeda jihadists into Syria, which ultimately caused the extinction of the FSA.

The filmmaker interviews on camera a young woman speaking in English.  She is identified as Linda Ibrahim, and she is a Syrian refugee living in Bulgaria.  She relates her participation in the demonstrations for regime-change, and her exact words can be found in the online transcript of the film dialog.  She is talking about her ‘friends’ who were killed in the protests.  There is a montage of photos of smiling young people who we assume to be her friends who participated in anti-government protests with her, and who have died.  We see a photo of Linda Ibrahim and her mother Emely Issa in a demonstration.  Linda is wearing a scarf-banner of the FSA, and her mother is holding the microphone and whipping up support among the demonstrators in front of a large crowd of protestors.  We see a video clip of a scene of demonstrators at the clock town in Homs, and there are shots fired and chaos ensues.  Emely Issa is acting in the film as she recounts her fears and the sound of gunfire.  She recalls her warnings to the protesters that the Syrian forces will shoot, which she emphasizes by repeating it twice.  The acting role of Linda Ibrahim and her mother in the film is to convince the viewer that there were young, beautiful Syrians who participated in protests, and their parents supported them, and it ended with the Syrian forces killing them.

Linda Ibrahim has identified those smiling young people in the photos as her friends, when in fact those people were not her friends, and had no connection to her, except that they all lived in Syria at the same time.  There was no relationship or contact of any kind between Linda Ibrahim, or her mother Emely Issa and Maya Barshini, Amin Nakrour, Atalla Abboud, and Ibrahim Saadi who are not only shown in the film in still photos, but are listed by name at the end of the film, in a special “In Memoriam” which states they were all killed by the “Assad Regime August 2013”.

Linda Ibrahim and her mother were actively participating in the FSA in Homs.  In the still photo used with Linda and Emely, Linda is wearing the three-star flag of the armed opposition FSA who were founded by Pres. Obama, and Sen. John McCain.  Linda and her mother were not simple supporters of the cause of armed conflict but were involved at the highest level of the political wing of the FSA.  Linda was very effective, because she was young and pretty, and the young men in their teens and twenties responded to a pretty girl urging them on as heroes, to slaughter their neighbors and destroy their city.

Linda Ibrahim and her mother Emely Issa now live peaceful and successful lives in Sofia, Bulgaria.  Linda calls herself online ‘The Star Linda Ibrahim’ and the ‘Star’ status derives from her acting role in the film.  She is working as a singer.  Her mother Emely Issa has listed herself online as self-employed.  Both women have left Syria and are thriving in Europe far removed from the chaos, death, and destruction they supported.  Linda Ibrahim and her mother Emely Issa provided the stolen photos of the four strangers and were paid salaries for their acting in the film.  Linda and her mother criminally provided the photos, names, and deaths of four strangers to them to place false blame on the Syrian government.  However, that does not legally absolve the filmmakers or National Geographic from the law, because the filmmakers were obligated to check facts before the completion of the film.  The same film was found to have falsely used a video from Palestine and attributed to Aleppo in the trailer, but they later removed it.

It would have been so easy to make the film factual, because Syrians have suffered, and there are millions of real stories of suffering to be told in truth.  #national_geographic_is_lying