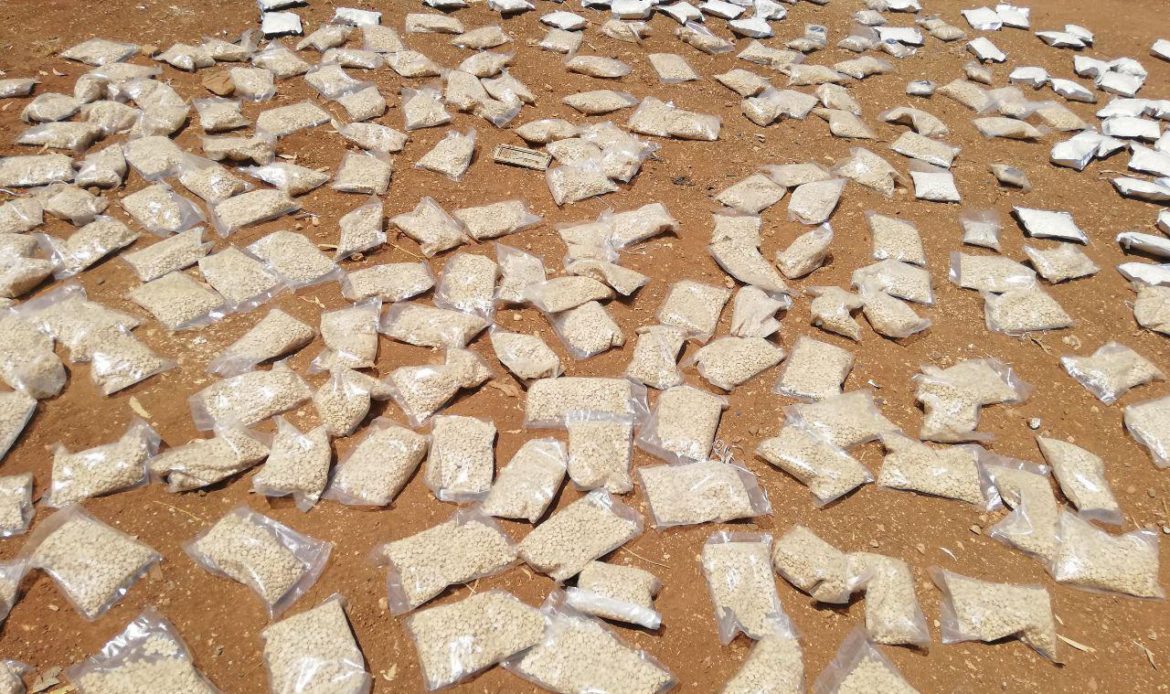 Syrian security forces have deprived terrorists of more than 400,000 Captagon pills. On 17 August, authorities in the suburbs of Damascus seized a truck with hidden compartments filled with a large quantity of this Amphetamine-type Stimulant (ATS) known as Captagon.

Captagon pills with other drugs were confiscated by the Syrian security who were monitoring the truck heading from Central Syria at the Lebanese borders towards the south of Syria, most likely towards Jordanian borders.

Upon careful inspection, the well-experienced officers discovered hidden compartments built within the container body of the large truck loaded with thousands and thousands of Captagon pills, most of which were already packed in smaller delivery retail-style bags.

Three members of the trafficking gang were arrested and has since been transferred to public prosecution for further investigation and to receive their punishment.

Captagon pills, Hash (Hashish), Cocaine, and a host of other drugs in very large quantities have been confiscated by the Syrian authorities throughout the current crisis. CIA-sponsored terrorists from Al-Qaeda, FSA, ISIS, whatever names the CIA finds suitable for them, were actively working on planting, manufacturing, and cross-border trafficking of this lucrative business for them, on one hand the NATO terrorists operating in Syria use it to enable them kill Syrians, maim living people and dead bodies, even blow themselves up with civilians with no remorse, committing unimaginable heinous crimes under influence of such drugs, narcotics, and Amphetamine-type Stimulant.

Another use of ‘investing’ in this business, CIA terrorists benefit from the revenues to finance their activities, pay high salaries to their recruits and their movements across their host countries. Their arms and logistics are taken care of the US taxpayers and the Gulfies. Before the current US-led War of Terror waged against the Syrian people, Syria was among the leading countries in the world of being clean of all sorts of drugs and related products, in producing and in trafficking. Capital punishment was introduced against those trafficking drugs to or through the country.

Captagon pills are widely used by the terrorists due to their ease of transportation and effects, also cheaper price compared with other drugs. Neighboring Lebanon is internationally known for growing Hashish and manufacturing Captagon pills. A Saudi prince – above photo – is serving a 6 years prison sentence in Lebanon after he was arrested with his private jet loaded with 1900 kilograms of Captagon pills and heading to Saudi from Beirut International Airport.

Captagon Gulf Lebanon Saudi Syria
Previous ArticleNational Geographic film about Syria exposed as political propaganda
Next Article Criminal War Propaganda Directed against Iraq and Syria: “We Think the Price Is Worth It.”