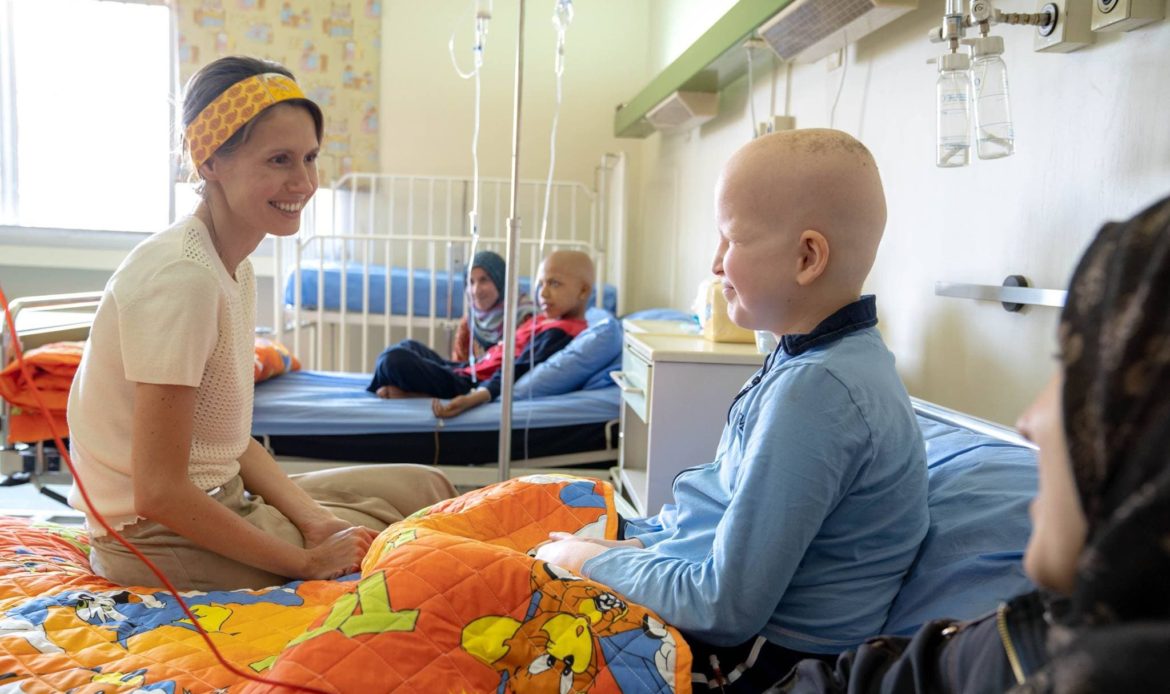 It may be a new low in propaganda. National Public Radio (NPR) used the news that Syrian First Lady Asma Assad had overcome breast cancer to mock her and continue the information war against Syria.  They interviewed a Human Rights Watch staffer named Lama Fakih who is an American from Michigan now based in Beirut.

Do you believe Ms. Fakih in Beirut or do you believe people who live in Syria who say we are being lied to?  Lilly Martin is such a person. Although she is American from Fresno California, Lilly has lived in Syria for nearly 25 years. She is married to a Syrian and has two Syrian sons.  Dr. Nabil Antaki is another such person. He is a medical doctor in Aleppo, fluent in English and French as well as his native Arabic.

While NPR snorts about Asma Assad “sporting a chic blonde pixie cut”, Lilly Martin points out that she was recently bald while fighting for her life.

While Ms. Fakih in Beirut says that there is “quite a lot of anger” because Asma Assad has conquered cancer, Dr. Antaki says that Syrians are happy at the news.  Asma Assad is First Lady, mother to three children, and known for her compassion. Lilly Martin says that even while she battled cancer Mrs. Assad continued her charitable work.

While Ms. Fakih says that the “Assad government has been systematically targeting medical facilities and medical personnel”,  Dr. Antaki, who has remained in Aleppo throughought the conflict, says this is not true. While there are many western accusations that the Syrian government attacks hospitals hospitals, the evidence is remarkably thin.  One of the most highly publicized cases was regarding “Al Quds Hospital” in east Aleppo. In April 2016 there was a media blitz about this hospital having been destroyed by the Syrian Army. Following  the departure of the “rebels”, it was discovered that “Al Quds Hospital” was an unmarked portion of an apartment building, that it had NOT been bombed and  was the LEAST damaged building in the area. It was determined that the nearby Nusra (Al Qaeda) headquarters and ammunition depot was the Syrian army target.  Accusations that “Al Quds Hospital” was bombed were false. It was a media stunt.

Ms. Fakih says that “Syrians have not been able to benefit from medical care in Syria since the beginning of the uprising in 2012”.   Lilly Martin simply says “This is factually  untrue. The Syrian system of national hospitals, free services to the public, are in every area of Syria and have run continuously throughout the war.”  Dr. Antaki is an example; he is one of THOUSANDS of doctors working at HUNDREDS of hospitals throughout Syria. But you would never know it from NPR or Ms. Fakih.

It is true that there have been disruption and damage to many hospitals, as demonstrated in this jihadi assault on Al Kindi Hospital.  These are the “rebels” supported by Ms. Fakih and Human Rights Watch. They effectively supported them in east Aleppo until they were expelled from the city. Now Ms. Fakih and HRW is supporting the “rebels” in their last redoubt in Idlib.  There are countless videos demonstrating the cruelty and fanaticism of the “rebels”.  For example, the aftermath of the above assault on Kindi Hospital and the execution of the Syrian soldiers who defended the hospital.  Those who are cheerleading for the “rebels” and trying to prevent the Syrian reclaiming Idlib should look at the execution video to see what they are supporting.

The West has provided weapons and other support to the “rebels”. In parallel, there  has been a campaign to whitewash the “rebels” and demonize the Syrian government.  On top of this, the USA has imposed crushing sanctions on Syria which make it difficult or impossible to get critical medicines and replacement parts for western medical equipment. Dr. Antaki says it took him 1.5 years to obtain a replacement part for a Japanese medical instrument.  I had my own experience with the draconian and inhumane sanctions. It took one year and endless hassle to send hearing aid batteries to help a deaf child in Syria.

This is one among hundreds of Syria “regime change” propaganda pieces broadcast on NPR. Behind a facade of authority and objectivity, there is bias and misinformation along with crocodile tears.   As Lilly Martin says, “While the Syrian government medical system has tried to meet all the needs of Syrian civilians during 8 years of armed conflict, still there are numerous cases where the needs were not met and Syrians have suffered, and that blame must be shouldered by every person who held a gun against Syria and their foreign supporters who have succeeded in bringing the Syrian people into the depths of destruction and despair.”

As to Asma Assad and her integrity, it is best to listen and judge for yourself.  At about 5:30 of the interview she speaks of the families of 100 thousand Syrian martyrs who died defending their country. “On a personal level, I am humbled by their determination, by their resilience, and by their love of Syria. They are my biggest source of strength and hope for the future.”

First_lady Syria
Previous ArticleThe War on Yemen: How Far Will the Saudi-UAE Confrontation Go?
Next Article How Tehran Fits into Russia-China Strategy