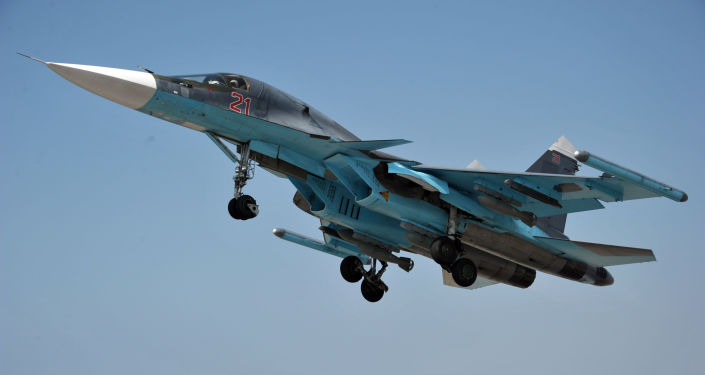 More details about the military incident involving a Turkish convoy on August 19 are becoming available. Jet fighters of the Syrian Air Forces and the Russian Aerospace Forces delivered a preventive air strike near the Turkish convoy on the outskirts of the town of Maarat al-Numan, 15 kilometers northwards Khan Shaikhoun. The convoy consisted of more than 50 wheeled armored vehicles and trucks which carried up to 10 tanks and a large quantity of ammunition.

According to the Turkish Ministry of Defense, before the convoy was dispatched the Russian side had been notified that the military equipment and cargo was allegedly intended to reinforce the Turkish garrison at the 9th observer post in southern Khan Shaikhoun. It is exactly where the Syrian governmental army is now unfolding a rather successful offensive operation against units of the Jabhat al-Nusra terrorist organization, which is banned in Russia.

Logical questions arise: why the majority of trucks were driven by militants from the Muslim Brotherhood organization, which is banned in Russia, rather than by Turkish soldiers and why the convoy was guarded by a large number of armed extremists?

Turkey’s Minister of Defense Hulusi Akar reacted to the Khan Shaikhoun incident signing a statement which says: “The attack of the Syrian army at the Turkish military convoy undermines agreements (with Russia) reached in Astana and Sochi, forces us to take every measure for protection and give us the right to respond.”

Such rhetoric of the Turkish leadership isn’t new. Ankara doesn’t hide its intention by all available means to prevent Syria’s government from establishing control over liberated districts of northwestern Syria, as well as from Russia’s exerting stronger military and political influence in Syria. Turkey’s Minister of Foreign Affairs Mevlut Cavusoglu said directly that “Ankara isn’t going to wrap up the activity of its 12 observer posts in the “de-escalation zone”. On the contrary, they will be reinforced with armored vehicles, artillery and personnel. As far as the enclave Afrin is concerned, only Turkey will control this district: Syrian governmental troops are out of question there.”

It can be expected that the Turkish authorities will soon again try to stage a provocation aimed at deteriorating relations with Syria. However, knowing that Moscow has taken a harsh and principled position in support of Damascus’s military policy, Ankara is unlikely to go for an open confrontation with its southern neighbor and deterioration of relations with Russia. Turkey has made a very high stake and it is very dangerous for it to risk.

Ankara is expected to host a meeting of the presidents of Russia, Iran and Turkey on September 11, 2019. Undoubtedly, the situation in northwestern Syria, prospects of creating a Turkey-controlled security zone and Iran’s further presence in the region will be the main topics on the agenda. As of now, breakthrough decisions are unlikely to be made. But there is no doubt that Moscow has managed to calm down its allies.