Home INTERVIEWS What’s Russia Up to in the Iranian Port of Chabahar? The North-South Transport Corridor (NSTC) 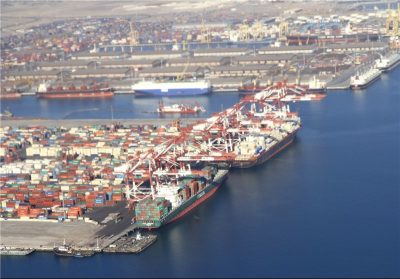 There have been wild reports over the past few weeks about Russia’s activities in the Iranian port of Chabahar, with some sources even alleging that Moscow plans to open up a naval base there.

An interesting sequence of events has recently taken place that makes many wonder what Russia’s up to in the Iranian port of Chabahar. It’s widely known that Russia, Azerbaijan, Iran, and India are cooperating on the North-South Transport Corridor (NSTC) project to integrate each of their economies more closely together, with Chabahar being this initiative’s terminal port in connecting India to the other three and also Central Asia.

There wasn’t much news about the NSTC over the past few years until late last month when the Iranian naval commander visited Saint Petersburg to participate in the Russian Navy Day celebrations and announced that the two sides agreed to hold joint drills in the near future in the Persian Gulf, Strait of Hormuz, Afro-Asian (“Indian”) Ocean, and the Makran waters, the latter of which are adjacent to Chabahar.

Shortly thereafter, oilprice.com (which is usually reliable enough that its articles — though importantly not this one — are sometimes even republished at Russia’s leading publicly financed international media outlet RT) reported that “senior sources close to the Iranian regime” told them that Russia plans to open up forward military bases in Chabahar and Bandar-e-Bushehr. This news was then followed by the managing director of Russia’s Astrakhan Special Economic Zone visiting Chabahar and signalinghis country’s interest in investing there. Taken together, it’s clear that the Russian role in Chabahar might increase in the future, but the question is over exactly what Moscow has in mind. The popular analyst “b” who writes for the Moon of Alabama blog published a thorough analysis debunking the claims that Russia will set up a base in Iran, specifically pointing to Article 146 of the Iranian Constitution that forbids the establishment of foreign military bases.

It’s therefore unrealistic to expect that to happen, which makes one wonder why oilprice.com would even report that, let alone claim that it was told to them by “senior sources close to the Iranian regime”. It can’t be known for certain, but it’s possible that a legitimately senior source in the Iranian government told the outlet what they later ended up publishing, though with the intent being to deter the US from striking Iran. Russia didn’t comment on the false reports probably because it wanted to retain a degree of strategic mystique that could improve its international soft power by raising its prestige. The US, for its part, probably approves of this narrative because it adds a degree of urgency to its stalled efforts to form a naval coalition in the Gulf and complements its infowar narrative about the so-called “Russian threat”. In other words, this fake news served Iranian, Russian, and American goals each in their own way, curiously making it a “win-win” for each of them.

What’s much more likely, however, is that Russia is interested in clinching a military logistics agreement with Iran similar to the ones that the US has with many of its own partners like India and which Moscow is currently pursuing with New Delhi, too. Russia’s strategic interest in this part of the Afro-Asian (“Indian”) Ocean has risen considerably over the past two years after it signed a memorandum of understanding with Iran in November 2017 to build an underwater gas pipeline from the Islamic Republic to India via the global pivot state of Pakistan’s exclusive economic zone. It then reached a similar memorandum of understanding with Pakistan nearly a year later. Russia is obviously trying to “balance” regional affairs through its recent “Return to South Asia“, which envisages it using its multibillion-dollar economic stake in the prospective pipeline to encourage peace and stability between all of its partners. In the best-case scenario, Chabahar might even connect to Gwadar — the terminal port of CPEC, BRI‘s flagship project — and become a platform for regional integration.

That, however, would be a long way coming, if ever at all, unless Iran decisively changes its approachto India like it’s been hinting and has the political will to defy New Delhi by making this connective dream a reality contrary to its partner’s wishes. Although there have been some signs that this might happen, the Islamic Republic thus far hasn’t translated its rhetoric into action, and might never do so. Furthermore, the disagreement that was on display between Russia and China over Kashmir last week exposed some serious strategic fault lines between these two that have up until now been covered up by the Alt-Media Community but which are becoming increasingly impossible to ignore, such as the underwhelming state of their economic relations as revealed by none other than President Putin’s spokesman earlier this year in an exclusive interview with RT. In fact, the more progress that Russia makes in reaching a “New Detente” with the West, the more likely it is to try “balancing” China just as much as integrating with it.

In this scenario, Russia would do all that it can to retain “strategic flexibility” by positioning itself as the leader of a new Non-Aligned Movement (Neo-NAM) that’s capable of cooperating with China by pairing the Eurasian Economic Union with BRI just like President Putin announced earlier this year that he intends to do alongside entering into “friendly competition” with it such as by facilitating its Indian rival’s access to Central Asia and Europe through Moscow’s enhanced presence in Chabahar, for example. A military logistics agreement with Iran would enable Russia to pursue both objectives by increasing the odds that Chabahar could one day connect with Gwadar as well as encouraging the conditions for India to more actively “balance” China in the parts of Eurasia far beyond their shared border. It’s this seemingly contradictory approach that actually embodies the meaning of multipolarity because it places Russia in the position to most powerfully influence hemispheric affairs to the best of its ability and thus regain its lost status as a globally significant Great Power.