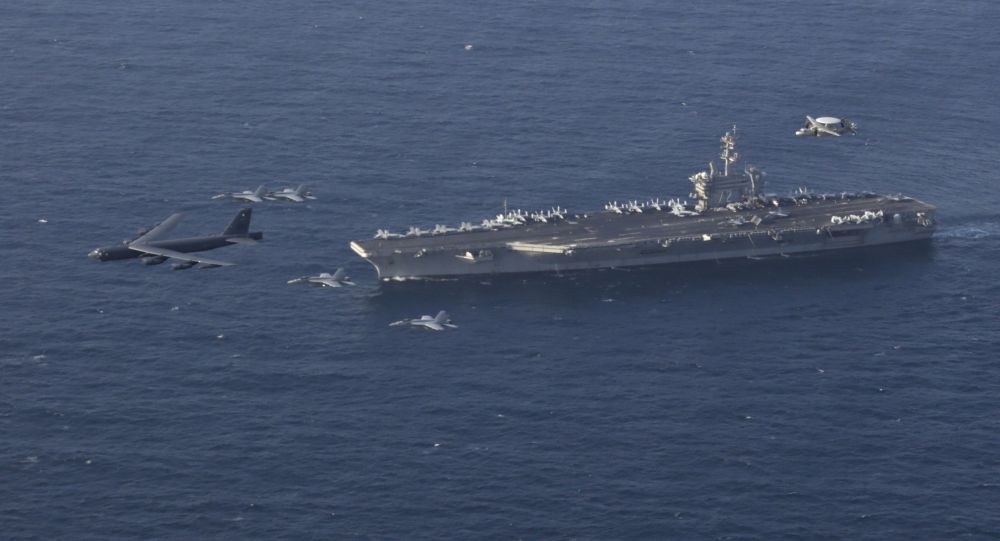 The United States sent an aircraft carrier strike group to the Middle East in May in a “clear message” to Iran that any attack on American interests or those of its allies would be met with “unrelenting force” in response to what Washington described as a “number of troubling and escalatory indications”.

Since being deployed to the Middle East in May, the USS Abraham Lincoln aircraft carrier has steered clear of both the Persian Gulf and the Strait of Hormuz, a strategic waterway linking Mideast crude producers to key world markets, The New York Times reported.

The USS Abraham Lincoln remains in the North Arabian Sea – over 600 nautical miles from the Strait of Hormuz, and the supposed reason for this, per the NYT, is the concern that if it goes through the oil passageway, the already existing tensions with Iran could escalate further.

“We recognise that tensions are high, and we don’t want to go to war. We don’t want to escalate things with Iran”, Capt. William Reed, a fighter pilot who commands the vessel’s air wing, was cited as saying.

Navy officials, however, claimed that they could “reach Iran” as easily from where they were positioned as they could from the Persian Gulf, but the important thing is that, “they can reach us when we’re there. When we’re here, they can’t”.

“I wouldn’t say we are sitting ducks, because we have offensive capability. But as you get further out into the North Arabian Sea, they just can’t see us”, Rear Adm. Michael E. Boyle, the commander of the strike group, said.

Boyle previously revealed to reporters that the aircraft carrier, which is stationed at a US naval base in Bahrain, had not passed through the Strait of Hormuz, and remained in the Arabian Gulf to “deter Iran”.

US officers on board the vessel told Sky News earlier this month that while their mission is deterrence, they are ready to launch offensive strikes if required.

According to multiple media reports, aircraft on the carrier were scheduled to strike three Iranian targets in June when Tehran shot down a US spy drone, which it claimed had invaded its airspace and ignored numerous warnings to leave the area. The US Central Command has, however, insisted that the UAV was hit while operating over international waters in the Strait of Hormuz.

At the time, President Donald Trump ordered and subsequently called off the retaliatory strikes just 10 minutes before the launch, explaining that the death of about 150 Iranians would be disproportionate to the loss of an unmanned US drone.

In early May, White House National Security Advisor John Bolton announced that the US would deploy the USS Abraham Lincoln and a bomber task force to the Middle East to send a “clear and unmistakable message” to Iran that any attack on Washington’s interests or those of its allies would be met “with unrelenting force”.

Bolton claimed that the decision was made in response to a “number of troubling and escalatory indications and warnings”.

Relations between Iran and the United States have been in a downward spiral since May 2018, when Trump pulled Washington out of the 2015 nuclear deal and reinstated all sanctions against Tehran with an eye to bringing its oil exports down “to zero”.

On the one-year anniversary of the US withdrawal, the Islamic Republic announced that it would suspend some of its voluntary commitments under the nuclear accord and would resume enriching uranium at a higher level within 60 days unless the five remaining signatories – Russia, China, the UK, France, and Germany – ensured that Tehran’s interests were protected.

Once the deadline expired, Iran said it would begin enriching uranium beyond the 3.67 level set by the agreement and gradually scale back on its nuclear obligations every 60 days.