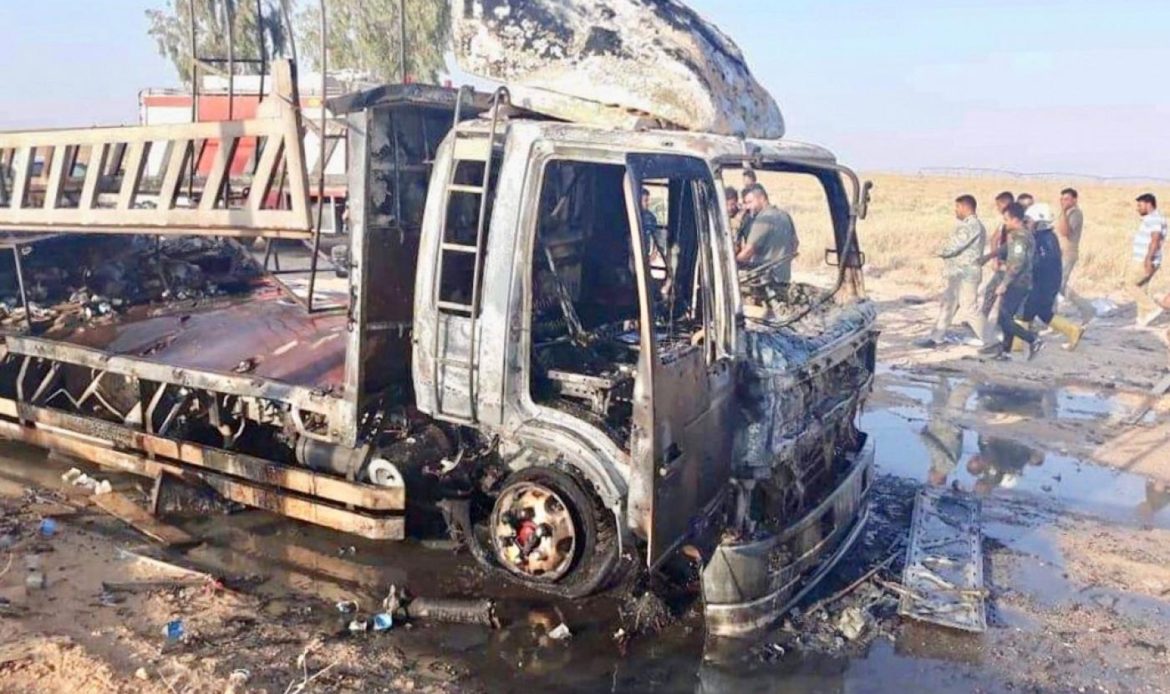 Having launched hundreds of attacks on Syria, while Damascus was distracted by its anti-terrorism operations, Israel has unleashed a wave of terrorism through drone attacks on Iraq’s popular mobilization forces (Hashd al Shaabi), followed by attacks on Lebanon, Syria and Gaza.

In most cases the pretext is ‘Iran’, though Israel has not yet had the courage to mount open attacks on the region’s largest independent state. However, in the past, Mossad has assassinated some of Iran’s nuclear scientists, as detailed in Ronen Bergman’s 2018 book Rise and Kill First.

Washington’s state media (Radio Farda) reported Israeli leader Benyamin Netanyahu saying, after two attacks on the PMF in Iraq, that “Iran has no immunity anywhere … We will act – and currently are acting – against them [Iran], wherever it is necessary”. Most have taken this as an admission. It is the same rationale used for Israeli attacks on Syria and Lebanon.

Washington has clearly been giving the green light. In a January visit to Iraq US Secretary of State Mike Pompeo hinted that Israel could attack the PMF. These forces, numbering around 150,000 and now incorporated into the Iraqi state, were key to the defeat of the Saudi-equipped DAESH/ISIS terrorists, after 2014.

The drone attacks on PMF ammunition stores in Iraq have been blamed on Israel, with backing from Washington. One attack was near Balad airbase, 80km north of Baghdad, another was in southern Baghdad and yet another near Amerli, about 170 kilometers north of Baghdad. Several people were killed and dozens injured.

The deputy head of Iraq’s PMF, Abu Mahdi al-Mohandes, blamed “American forces”, which were said to have allowed Israeli drones into Iraq. Iraqi MP Karim Alaiwi, a member of the parliament’s security committee, said there had been substantial previous Israeli aggression.

Newsweek magazine (23/08) reported US officials confirming Israel’s involvement in the attacks on Iraq. The US itself has imposed economic sanctions on several PMF leaders and some PMF groups, those most closely aligned with Iran.

The Washington Times reported in March this year that the PMF groups were “perhaps the loudest voice arguing that it is time for the Americans to go home”. The Iraqi state has yet to demonstrate sufficient political will to demand this.

Nevertheless, Iraq’s National Security Council has since canceled all foreign flights except those approved by the head of Iraq’s armed forces. That includes US flights. PMF leader al Mohandes said his forces would deal directly with any non-authorised flights.

PMF units have also helped with anti-DAESH operations in eastern Syria. Yet in June 2018 PMF fighters in the border town of al-Har came under missile attack, as they were chasing DAESH terrorists. Both Syria and the PMF blamed Israel and the USA.

There is a substantial history of the US and Israel backing terrorism in Iraq. Since late 2014 there have been constant reports in the Iraqi and Iranian media of US military support for DAESH, in particular arms drops and the helicopter evacuation of DAESH commanders, to other parts of the region, including to Afghanistan.

A senior Syrian general told this writer, in Deir Ezzor two years ago, that while fighting DAESH/ISIS in eastern Syria he felt he was directly up against a US command.

Weapons and satellite intel have been repeatedly passed to the banned terrorist group. On occasions there have been direct US military intervention in support of DAESH, as with the September 2016 US and Australian air force slaughter of more than 120 Syrian soldiers at Jabal al Tharda, behind Deir Ezzor airport After that attack DAESH took the mountain but did not manage to take the airport. Deir Ezzor was liberated by the Syrian Arab Army one year later.

Syria remains a constant target of Israeli terrorism. The Zionist regime is worried that, when the Syrian Army finishes with the al Qaeda groups they will turn to reclaim the Syrian Golan, illegally occupied by Israel since 1967.

In the same week as the drone attacks on Iraq and Lebanon, an Israeli missile and drone attack on sites in Damascus was mostly repelled, but several Hezbollah fighters were killed.

Israel’s attacks on Syria, have always been backed by a ‘self-defense’ pretext, yet the zionist regime has both openly and covertly supported many of the terrorist groups in Syria, by giving them refuge, medical treatment, finance and arms.

In another provocation, two Israeli drones went down on south Beirut, one of them exploding on the Hezbollah media office, causing property damage. Hezbollah leader Hassan Nasrallah responded by saying: “What happened in Syria and Lebanon last night is very, very dangerous … I tell the Israeli army on the border: wait for our response, which may take place at any time on the border and beyond the border.”

The zionist rhetoric has been extreme. In April year Israeli minister Yisrael Katz threatened to send Lebanon back to “the Stone Age”, because of its stockpile of Iranian weapons. In December minister Yoav Galant repeated the threat, saying if war broke out “we will return Lebanon to the Stone Age”. Now they seem to invite large scale war.

Yet another Israeli attack on Gaza was launched, immediately after the regional terrorism. In addition, Israeli warplanes attacked Palestinian PFLP positions at Qusaya, in Lebanon’s Bekaa Valley. According to Israel’s Maariv newspaper, an attack on Yemen was also coming.

There has been no retaliation so far from Hezbollah, Syria, Iraq or Iran, but all have warned that a combined and devastating response is on the cards.

Some have linked the attacks to Israel’s upcoming election, in which most Palestinians will have no vote. Hassan Nasrallah told Israelis that Netanyahu was “a corrupt man who is afraid of the election’s outcome … [but] has no problems to trade on your blood.”

Israeli leaders have launched this new wave of terrorism, knowing very well that the Israeli regime could not withstand a concerted attack from Iran and its allies. They clearly count on drawing Washington and perhaps other allies into a regional war. That is a very dangerous game.