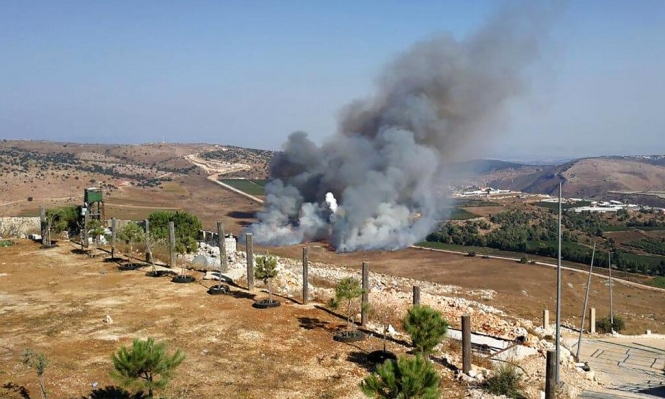 ‘The Group of the Martyrs Zbieb and Dhaher managed to destroy a military vehicle at the road of Ivivim colony killing and injuring who’s inside it.’ This was the statement by Hezbollah minutes ago.

Hezbollah has vowed to retaliate the unprovoked cowardly multiple aggressions by Israel against an apartment used by Hezbollah members in the village of Aqraba in Damascus countryside killing two members of the Hezb in their dorms.

At the same time, Netanyahu forces sent two suicide drones to the Southern Beirut residential neighborhood, the main base for Hezbollah supporters in the Lebanese capital.

This operation Hezbollah stated was carried out by the ‘Group of the martyrs Hassan Zbieb and Yassir Dhaher’ referring to the two martyrs killed in the attack on Aqraba, the Hezb’s reference means this is the retaliation against the aggression against Aqraba only.

Chief of Hezbollah Sayyed Hassan Nasrallah vowed to retaliate to both attacks separately, the two drones made Hezb bypass a previous understanding with the Lebanese government not to target Israeli drones over Lebanon, now the resistance movement will be targeting any intruding drones to set the rules of engagement in this regards.

Netanyahu forces are now retaliating against the plants on the Lebanese borders firing flaming bombs which are causing sporadic fires in the area.

Netanyahu carried out the multiple attacks against Syria, Lebanon and also against Iraqi PMUs, all of them engaged in fighting Al-Qaeda and its affiliates Nusra Front and ISIS in both Syria and Iraq, his motives were to gain more votes among the radical foreign imported settlers in occupied Palestine in the coming elections on 17th of current September. Netanyahu, who likes to call himself ‘Mr. Security’ promising his imported foreign settlers security, has instead brought them complete insecurity on the borders and deep inside occupied Palestine.

Al-Mayadeen further added from its exclusive sources: The target was a troop transporting vehicle, Hezb fighters allowed the ambulance to evacuate the killed and injured IDF members, and the operation was carried at the height of the Israeli ‘intelligence’ observation.