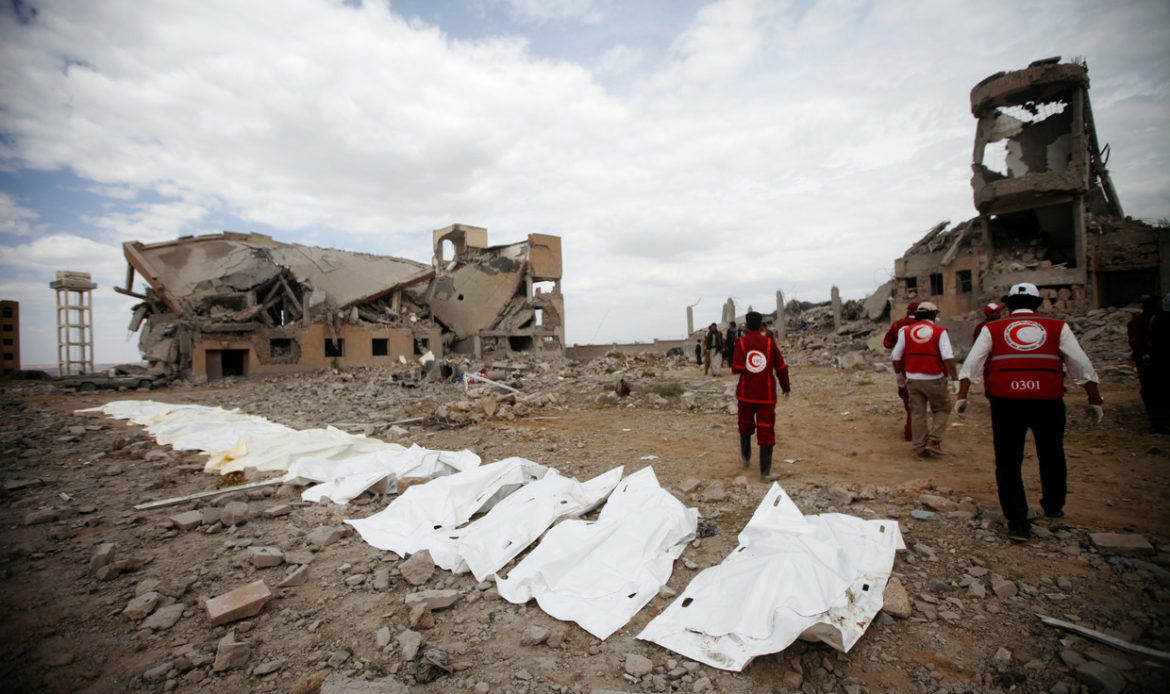 The second largest sovereign state in the Arabian Peninsula, Yemen, has been ravaged by war, deliberate starvation, and cholera for over four years. A 274 page U.N. report released on Tuesday, highlights the human rights situation including violations and abuses since September 2014.

According to the report, which took two years to complete, the United States, France, and Britain may be complicit in war crimes for their involvement in the war in Yemen by not only supplying the weapons being used by the Saudi and United Arab Emirate coalitions, but also providing them with intelligence and logistics support.

The report details the findings of the Group of Eminent International and Regional Experts on Yemen. It was submitted as a supplement to A/HR/42/17. U.N. investigators are recommending that all states impose a ban on arms transfers to the warring parties in order to prevent them from being used to commit serious violations and war crimes.

The report states, “The Group of Experts reiterates that steps required to address the human rights and international law violations in Yemen have been continually discussed, and there can no longer be any excuses made for failure to take meaningful steps to address them. The best way to protect the Yemeni population is to stop the fighting by reaching a political settlement which includes measures for accountability.”

Saudi Arabia and the United Arab Emirates are two of the largest purchasers of U.S. British and French weapons. These weapons are being used to fight against the homegrown Houthi movement which controls Yemen’s capital. The report states, “The legality of arms transfers by France, the United Kingdom, the United States and other States remains questionable, and is the subject of various domestic court proceedings.”

According to the U.N. report, Saudi and UAE coalitions are killing civilians in air strikes, and deliberately denying them food. The report put blame on all sides of the conflict, saying that no one has clean hands.

Kamel Jendoubi, chairperson of the Group of Experts on Yemen a creation of the U.N. Human Rights Council stated, “Five years into the conflict, violations against Yemeni civilians continue unabated, with total disregard for the plight of the people and a lack of international action to hold parties to the conflict accountable.” He also stated “This endemic impunity—for violations and abuses by all parties to the conflict—cannot be tolerated anymore.” Jendoubi concluded, “Impartial and independent inquiries must be empowered to hold accountable those who disrespect the rights of the Yemeni people. The international community must stop turning a blind eye to these violations and the intolerable humanitarian situation.”

Allegations of torture, rape, and murder of suspected political opponents detained in secret facilities by Emirati and affiliated forces have been received by the U.N. panel.

A secret list was sent by an independent panel to U.N. human rights chief, Michelle Bachelet, identifying “individuals who may be responsible for international crimes” the U.N. report states.

In the appendix, was a separate list identifying more than 160 “main actors” among Saudi, Emirati and Yemeni government and Houthi officials.

Concerns have been raised as to the impartiality and legitimacy of a Joint Incidents Assessment Team set up by Saudi Arabia to review alleged coalition violations, after it failed to hold anyone accountable for air strikes that killed civilians.

The U.N. report comes just a few days after a recent airstrike by the Saudi-led military coalition on a detention center in Yemen on Sunday, killed more than 100 people. The International Committee of the Red Cross (ICRC) said the attack may have amounted to a war crime. The coalition said it was targeting a drones and missiles facility but instead they leveled a building being used as a prison, in the city of Dhamar.

“The location that was hit has been visited by ICRC before,” Franz Rauchenstein, its head of delegation for Yemen, told AFP from Dhamar. “It’s a college building that has been empty and has been used as a detention facility for a while.” Rauchenstein continued, “What is most disturbing is that (the attack was) on a prison. To hit such a building is shocking and saddening – prisoners are protected by international law.” The remaining forty survivors are being treated in hospitals in the city south of the capital Sanaa for their injuries.

Last Thursday, airstrikes hit Yemeni government forces heading to Aden a southern port city, to fight UAE backed separatists. At least 30 troops were killed according to a government commander. The UAE has been known to arm and train separatist militias in southern Yemen. For weeks now, a rift between Saudi and UAE proxies has further complicated matters and civilians are paying the price.

A bipartisan group of lawmakers launched a new effort to end the U.S. government’s involvement in the Saudi-led assault on Yemen, shortly after the latest attacks. Lawmakers are also calling on the Senate to not remove an amendment to the annual defense policy legislation which would prohibit the U.S. from cooperating with Saudi airstrikes. Sanders stated, “We must use Congress’s power of the purse to block every nickel of taxpayer money from going to assist the Saudi dictatorship as it bombs and starves civilians in Yemen.”

Unfortunately, even with the release of this new U.N. report, the likelihood that nations perpetrating war crimes against innocent Yemeni civilians will be held accountable is highly unlikely.