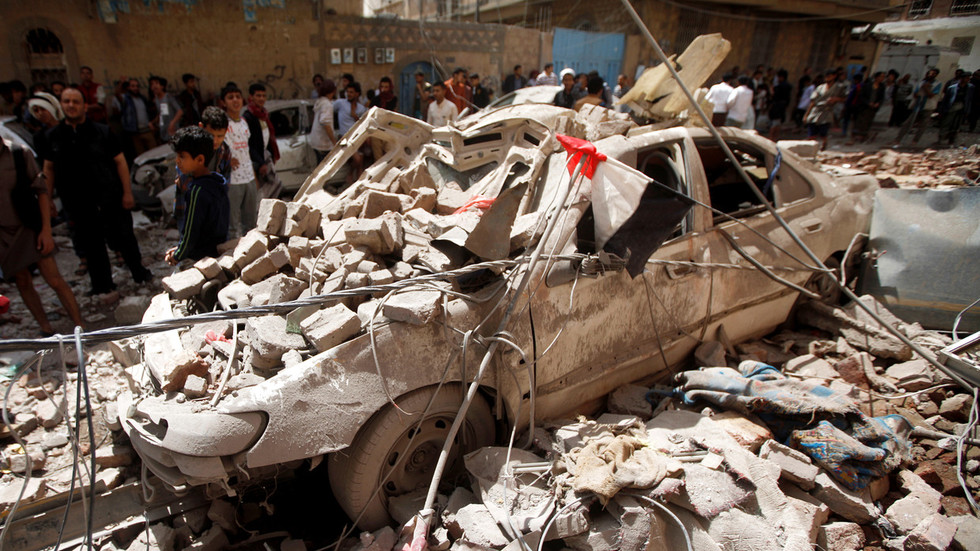 Will France, UK, US ever pay for what they have done to Yemen?

A recent UN Human Rights Council report has exposed the US, UK, and France’s role in the destruction of Yemen, prompting conversations about the accountability of those responsible for the carnage.

Renowned activist, press freedom advocate, and Nobel Laureate Tawakul Karman once told the Yemen Times that “a day will come when all human rights violators pay for what they did to Yemen.” This statement was made years before the US, UK, and France enabled a Saudi-led coalition to ravage Yemen’s entire civilian population through a host of criminal actions.

Thanks to a UN report released on Tuesday this week, we may be closer to seeing some accountability for the criminal actions of all human rights violators who have used the people of Yemen in a cruel, geopolitical chess game to further their own agenda. But will Western governments be held accountable, or is this yet another case of wishful thinking?

For those who have followed and documented the Yemen conflict closely, the UN report doesn’t exactly tell us anything we didn’t know or suspect already. The document says that the US, UK, and France, as well as the obvious culprits in the Saudi-led coalition, have some degree of complicity in a range of potential war crimes over the past five years, including airstrikes, indiscriminate shelling, snipers, landmines, arbitrary killings and detention, torture, sexual and gender-based violence, and starvation as a method of warfare.

It is interesting to note that the UN experts identified individuals who may be responsible for international crimes and has passed those names on to the UN High Commissioner. Where locating names were not possible, the experts made notes of the groups responsible instead.

Perhaps this time around, the UN Human Rights Council – which, by the way, has Saudi Arabia as a member until the end of the year – is not playing around.

“This endemic  impunity – for violations and abuses by all parties to the conflict – cannot be tolerated anymore,” said the panel’s chairperson. “Impartial and independent inquiries must be empowered to hold accountable those who disrespect the rights of the Yemeni people. The international community must stop turning a blind eye to these violations and the intolerable humanitarian situation.”

According to the UN report, the implications of this are further reaching than one might expect. If we were to adopt the report’s findings, even countries such as Australia should re-examine its policies.

No need to fret however, because according to a spokesperson for the British government, “the UK has been at the forefront of international efforts to bring a diplomatic solution to the appalling conflict in Yemen.”

Well, actually, the UK government  assists the Saudi-led coalition in bombing Yemen by having its personnel sitting in the command and control room that coordinates the delivery of strikes, providing British-made bombs to rain destruction on Yemen, training Saudi pilots, maintaining and preparing British planes inside Saudi Arabia with the help of British engineers and thousands of British contractors, providing troops to assist with the Saudi-led ground mission inside Yemen, and the list goes on.

Perhaps this is what prompted British Historian Mark Curtis to tweet, “No postwar Minister has ever been held to account for war crimes abroad, despite numerous horrendous episodes in UK foreign policy.”

But let’s not give France a free pass either. While President Emmanuel Macron tours the world under the guise of a humanitarian, calling for level-headedness, tolerance, respect and diplomacy across the planet, the report is a stark reminder that France is just as colonially motivated to batter poor countries behind closed doors.

A leaked document from France’s Military Intelligence Branch of the Ministry of Defense made known the deliberate use of French weapons in the Yemen war. The arms include tanks and laser-guided missile systems which were sold to both Saudi Arabia and the UAE, the leading front-runners of the war. The document was even reportedly presented to Macron himself, who can hardly hide behind the cloud of his exterior image as a peace-broker (previously, France said weapons sold to the Kingdom were for self-defence purposes only). According to the reports, satellite images, video and photographs taken by civilians affirmed that some of these tanks bought by the UAE had taken part in coalition offensives, including the brutal campaign to bully Hodeidah into submission.

As is the case with the UK, the French role in the conflict goes beyond that of arms sales. Reports state that from the beginning of the war, French personnel “flew reconnaissance missions” over Houthi positions for the benefit of Saudi Arabia, and continued to train its fighter pilots. The French Navy once even reportedly stepped in to ensure the continuation of the economic blockade on Yemen when Saudi Arabia’s fleet withdrew for maintenance in 2016.

The role of the United States in this atrocity is abundantly apparent to anyone who has followed the conflict, or understands the basic nature of Middle Eastern geopolitics. I could write entire books on this topic if I had the time.

But what will be intriguing to see is if this report is the first step in a direction which sees the United States held accountable for its participation in these international criminal acts. According to an email response I received from the UN, the Human Rights Council is hoping that as their work continues, their findings and recommendations will evolve as a result. They note, however, that many states are opposed to this scenario.

There was a brief period of time when the ICC appeared to suggest it would begin tackling the juggernaut that is the US for its crimes committed in Afghanistan, but the hopefulness for that project fell apart completely earlier this year. If we can’t get an investigation into war crimes in Afghanistan, then who knows what we can hope to achieve in the field of human rights in the short-term future.

The irony is that the three main culprits: the US, UK, and France, tend to trudge around the globe lecturing the world on matters of human rights, freedom, and democracy. None of these principles apply to the people of Yemen, who are being collectively punished for reasons which still remain unclear to me.

In my opinion, the timing of the report’s release could not be any more appropriate and could potentially generate a global discussion on the unfortunate situation plaguing Yemen (the poorest, most impoverished nation in the Arab world). Just days ago, a barrage of coalition air strikes killed over 100 people and wounded dozens more at a Houthi detention centre in Yemen. Putting international law to one side, even a layman would have to think that a detention centre is off-limits in a warzone by its very definition. (They’re detained; where can they possibly run in the event of an air strike?)

According to the head of the Red Cross delegation in Yemen, “90 body parts” were recovered during the initial response to this recent attack. An excessively cruel act, even for the Saudi-led coalition.

One can only hope that the UN report can help put a stop to these types of attacks in the future, not by pressuring Saudi Arabia and its coalition, but by influencing the decision-makers who enable these horrific acts to go ahead unabated. As I said, the UN report didn’t confirm anything we didn’t already know, nor did it detail anything that lawmakers across the planet didn’t already know for years. In other words, we have long known the potential legal ramifications for our support for a coalition which pulverises Yemen, and this hasn’t changed our mindset. Hell, it took the killing of a Washington Post journalist for Germany to change its tune (the killing of innocent civilians doesn’t quite cut it).

Then again, to have a two-year investigation in writing by a UN expert group certainly helps our cause, and may ultimately help Tawakul Karman’s prophecy come true in the medium to long-term future.