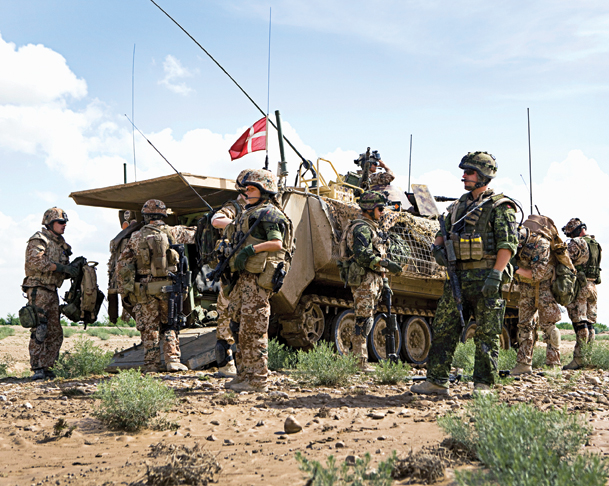 Denmark is recognized as one of the most socially and economically developed countries in the world, which enjoys a high standard of living as well as high metrics in national performance, protection of civil liberties, and the lowest perceived level of corruption in the world, has announced that it will be boosting military contributions to missions around the world, including joining the United States in its illegal and unauthorized deployment in northeastern Syria.

The sovereign and proud nation of Syria has neither invited nor does it accept any foreign invaders on its land and has repeatedly demanded that all foreign forces leave on their own before they are forced out. Syria is highly committed to liberating every inch of its land from terrorist control whether that be domestic or foreign, and protecting its territorial integrity.

On Friday, U.S. Department of Defense Chief Pentagon Spokesperson, Jonathan R. Hoffman provided the following statement on Denmark’s deployment to Syria: “The United States welcomes the announcement by the Danish Government to make a military deployment to Syria in support of Operation Inherent Resolve and to continue to share the burden and responsibilities of this important mission. As a founding member of the Global Coalition to Defeat ISIS, this deployment demonstrates Denmark’s continued commitment to working with our partners, to include the SDF, to ensure ISIS cannot re-emerge. Our Danish partners will work with the residual U.S. military force in northeast Syria to support stability and security. We look forward to working with our Danish ally to continue our shared mission of achieving ISIS’s enduring defeat-in Syria and wherever else the group may operate.”

The Nordic nation, along with its NATO allies; the United States, France, Britain, Turkey etc.  do not have authorization by the Syrian government nor the UN Security Council to even be in Syria, let alone carry out any military operations.

With the exception of Turkey, these foreign troops are seen as illegal invaders supporting a Kurdish-led separatist movement in northeastern Syria which is closely aligned with and supported by Israel and has even employed Daesh-like tactics during the war. The so called Syrian Democratic Forces (SDF) is simply a rebranding by the US of the People’s Protection Units (YPG), a Syrian offshoot of the Turkish based Kurdistan Workers Party (PKK) which is recognized as a terrorist organization by the United States and other NATO members, and has been in conflict with the Turkish government since 1984.

The US-led coalition has killed at least 1,319 civilians during its unauthorized operations in Syria and Iraq since 2014, by its own admission, although the actual number is most likely higher.

On Friday, Denmark’s Foreign Minister Jeppe Kofod stated that Denmark must lift its share of the burden as a member of NATO. Danish Minister of Defense Trine Bramsen said that she was proud that the country will be contributing to peace and stability in one of the world’s hotspots.

Ironically, Syria would not have become a “hotspot” if the US and their allies didn’t support terrorist factions and weren’t committed to “regime-change” for the past eight years.

In addition to sending support to the “Global Coalition against Islamic State” in northeast Syria, the Danish military will also be sending support to the United Nations peacekeeping mission in Mali, France’s mission in the Sahel, and a U.S. aircraft carrier group in the north Atlantic and Mediterranean seas, as well as increasing its contributions to NATO and as if that wasn’t enough there’s also talks of a possible deployment to an international maritime effort in the Strait of Hormuz. In response to calls from the U.K. and France for a “European-led maritime mission” in the Persian Gulf region which would probably be in addition to an increased U.S. presence.

“When we make new military contributions in the Sahel region and in Syria to the fight against ISIL, it is about more than immediate firefighting,” Danish Foreign Minister Kofod said Friday. Kofod also said, “We are working across several fronts to create security, stability, and – in the long term – a positive development in the immediate neighborhoods of Europe.”

The aforementioned “military contributions” including sending a “helicopter contribution of up to 70 people and one-to-two staff officers” to France’s Operation Barkhane in sub-Saharan Africa’s Sahel region, for the first time. As well as, sending a medical team consisting of fourteen members including doctors, nurses, therapists, and support staff to provide trauma care at a coalition base in northeastern Syria.

Denmark will also be sending a C-130J transport aircraft along with approximately 65 personnel as well as a staff contribution of up to 10 to MINUSMA, the United Nations stabilization mission in Mali.

Also, to strengthen NATO’s deterrence and defense profile Denmark will be sending around 700 personnel to NATO missions, including a combat battalion, a “larger warship” and four fighter aircraft.

A frigate will be sent by Denmark to accompany a U.S. Navy carrier group for three months on an upcoming deployment in the Med and North America as well. It appears that building a closer and stronger cooperation with the U.S. is a priority for Denmark, maybe even more so than their supposed mission to strengthen maritime security.

Last December, U.S. President Trump announced the withdrawal of American troops from Syria, stating we had won against ISIS and called on other nations to step in. His plans were derailed and currently there exists a fair amount of British and French troops in addition to U.S. Special Operations Forces who have trained and advised the SDF in the northeastern region. France and the U.K have stated during the past few months, that they will increase their presence.

Some are questioning whether Denmark’s surprise announcement to deploy troops to Syria is an attempt to make amends with President Donald Trump. After refusing to sell him Greenland, Trump canceled his trip to Denmark.