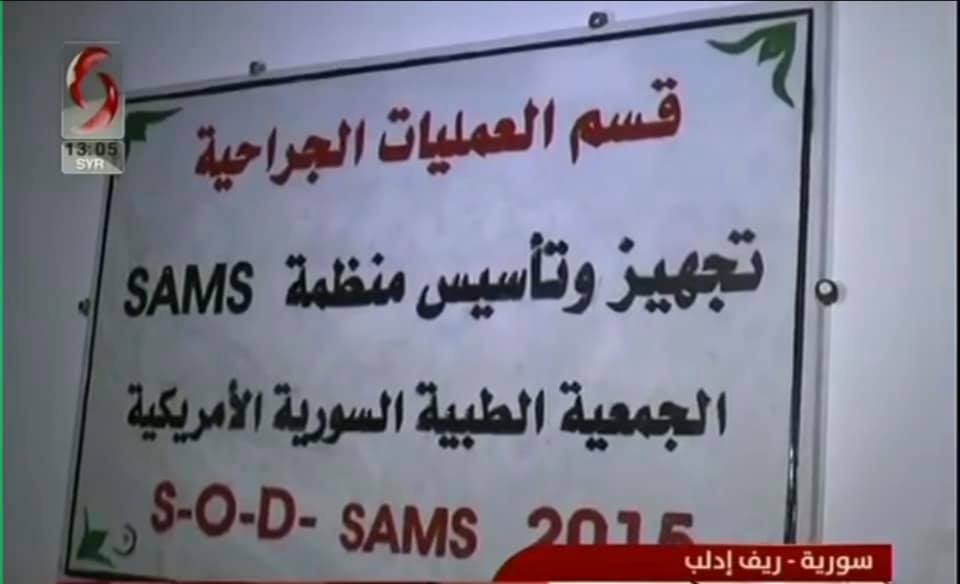 An underground hospital has recently been found in Idlib, as the Syrian Arab Army (SAA) advances on a mission to liberate the area from Al Qaeda occupation and free the civilians.  The SAA was fighting in an area only inhabited by Hayat Tahir al-Sham (HTS), aka Al Qaeda in Syria.  This hospital never delivered a baby or treated a child’s inflamed tonsils.  This hospital was chiseled out of the rock, deep under the ground, and was only accessible by armed terrorists.  Inside the hospital-cave was an elaborate stone wall memorial in honor of the charity that founded and supported this Al Qaeda medical treatment center: Syrian American Medical Society (SAMS).

SAMS was founded in 1998 by members of the Syrian American community in the suburbs of Chicago, Illinois, and had worked closely with Syrian President Hafez al-Assad.  Doctors of Syrian ancestry joined the group intending to promote better medical services in Syria through the networking of professionals in both countries.  Each July, with the Syrian government’s full support, SAMS held an annual conference in Syria. Members spent several weeks in Syria around this conference teaching best practices at local hospitals, medical schools, and donating free medical care to needy Syrians. 2 SAMS members broke ground on the Syrian-American Medical City, a private diagnostic hospital in suburban Damascus, to open in the summer of 2008. 26 Syrian-American doctors planned construction of a second hospital called the Syrian-American Medical Center, slated for 2010; featuring a cancer ward, a transplant center, and a neonatal intensive care unit.

The collaboration between SAMS and the Syrian government under President Bashar al-Assad came to a halt when Dr. Zaher Sahloul became President of SAMS.  Dr. Sahloul is said by those who know him in Chicago to be a member of the Muslim Brotherhood. The Syrian conflict began in spring 2011 and Dr. Sahloul immediately transformed a non-political medical society into a medical support unit of the US-NATO attack on Syria for regime change. Nearly half of its members resigned in protest; believing doctors should not take sides in a conflict which will affect all Syrians. Former members of SAMS complained that the organization’s board of directors was high jacked by the Muslim Brotherhood, and Christian and secular members resigned from the group as it morphed into medical support for Islamists.

SAMS sent aid and set up hospitals in areas exclusively under occupation.  SAMS now only operates in Idlib, where the schools are segregated, women forced to wear veils, and posters of Osama bin Laden hung on the walls. SAMS has grown from $70,000 in annual expenses and 60 members in 2011 to a $25 million budget and 1,900 health care providers. Over $5.8 million of the budget came from USAID, an arm of the US State Department, which is home to the “Office of Transition Initiatives”, tasked with funding regime change.

Dr. Zaher Sahloul’s goal is to place Syrian Islamists in power in Damascus while lobbying Congress, the State Department and the United Nations for regime change in Syria. At SAMS annual gala on March 6, 2017, the audience heard calls for stepped-up arms shipments to Syrian rebels, a US-led No Fly Zone for Idlib, and for preventing reconstruction of Syria’s shattered infrastructure until regime change is achieved.

One of the tactics of the US Muslim Brotherhood is to construct coalitions of its front organizations, giving the appearance that the Brotherhood has more broad-based support than in reality.  Inside Syria, there is very little support for the Muslim Brotherhood and their political ideology, and this is why the Muslim Brotherhood’s armed wing, Free Syrian Army, became extinct.  The majority of Syrian residents did not support an armed revolution, and that caused its failure.

Dr. Wafa Sultan is a Syrian psychiatrist living in the U.S. In 2005 she published an article about the Syrian Muslim Brotherhood, in which she asks, “Are they now praying to a deity other than the one whose name they called when shouting ‘Allahu Akbar’ while shooting down the country’s best and brightest from among the scholars of science and law, for the sole reason that they belonged to groups that did not embrace their basic beliefs and principles?”  She was referring to their terrorist acts in Syria at the end of the 1970s and the beginning of the 1980s.  She questioned their attempt to create a new image while remembering in the past they called everyone ‘heathens’ who did not support their Islamic fascism.

The original source of this article is mideast discourse