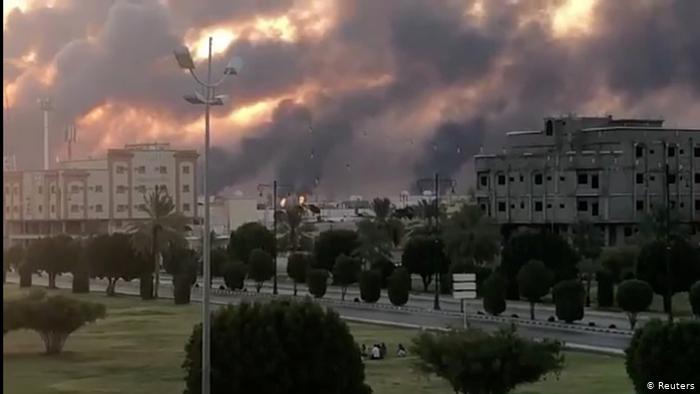 Experts say critical oil supplies lost due to Yemeni attacks on Saudi Arabia’s production plants can only be compensated if the United States eases its sanctions on sale of crude by Iran.

Sandy Fielden, an analyst at Morningstar, a global financial services firm based in the US, said on Saturday that the current oil stocks in Saudi Arabia, the biggest oil exporter in the world, would not suffice to compensate for a loss of around 5 million barrels per day (bpd) that could be caused by attacks earlier in the day targeting the kingdom’s vital oil facilities located east of the country.

Fielden said the disruptions could cause a real jump in the global oil prices, adding that the US, a main player in the oil market and an ally of the Saudis, would have no option but to allow Iran to resume its crude exports after months of a halt that has been caused by Washington’s unilateral bans.

“By all accounts the Iranians have tankers full of storage ready to go,” he said, adding, “The obvious short-term fix would be waivers on Iran sanctions.”

Yemen’s ruling Houthi Ansarullah movement said on Saturday that its drones had successfully attacked two oil plants in Abqaiq, the heart of Saudi Arabia’s oil industry, in the kingdom’s Eastern Province.
The Houthis said the attacks were a firm response to Saudi Arabia’s relentless bombardment of Yemen, where tens of thousands of civilians have been killed since Riyadh launched its illegal military campaign four years ago.

James Krane, Middle East energy specialist at Rice University’s Baker Institute, suggested that supplies from a country like Iran would be the best option to replace the lost Saudi production as most of the Kingdom’s exports normally go to countries in Asia that are closer to Iran than any other major oil producer.

“For the United States, the main threat is in the price of oil,” said Krane, adding, “Asian countries are more at immediate risk because they are the big importers from Saudi Arabia, with 80% of Saudi exports going to East Asia.”

Analysts said Yemeni attacks on Saudi oil installations showed that Riyadh, which pumps just below 10 million bpd of oil into the global market, is effectively defenseless in the face of strikes from its impoverished neighbor.

Fielden said Washington would also find it impossible to try to solve the crisis on its own by sending tankers full of oil to Saudi customers in East Asia.

“It takes 19-20 days to ship Ras Tanura (Saudi) to Singapore, but 54 days from Houston to Singapore. So US ‘relief’ will take time,” he said.

However, US officials said right after the attack that they would try to ensure a smooth supply of oil to the global markets despite the attacks in Abqaiq.

White House spokesman Judd Deere said in a statement that Washington was committed to well-supplied oil markets while adding that US President Donald Trump had held a phone conversation with Saudi Crown Prince Mohammed bin Salman following the Saturday attacks.

The International Energy Agency (IEA) also said that in the short term was there were no real concerns about supplies to the markets.

“For now, markets are well supplied with ample commercial stocks,” it said, adding, “The IEA is monitoring the situation in Saudi Arabia closely. We are in contact with Saudi authorities as well as major producer and consumer nations.”

The United Arab Emirates, a close ally of Saudi Arabia and a major oil producer, said it would support measures adopted by the kingdom to safeguard its security following Saturday attacks.