Home Politics On the Ground, Feeling the Pulse of Protest Hong Kong 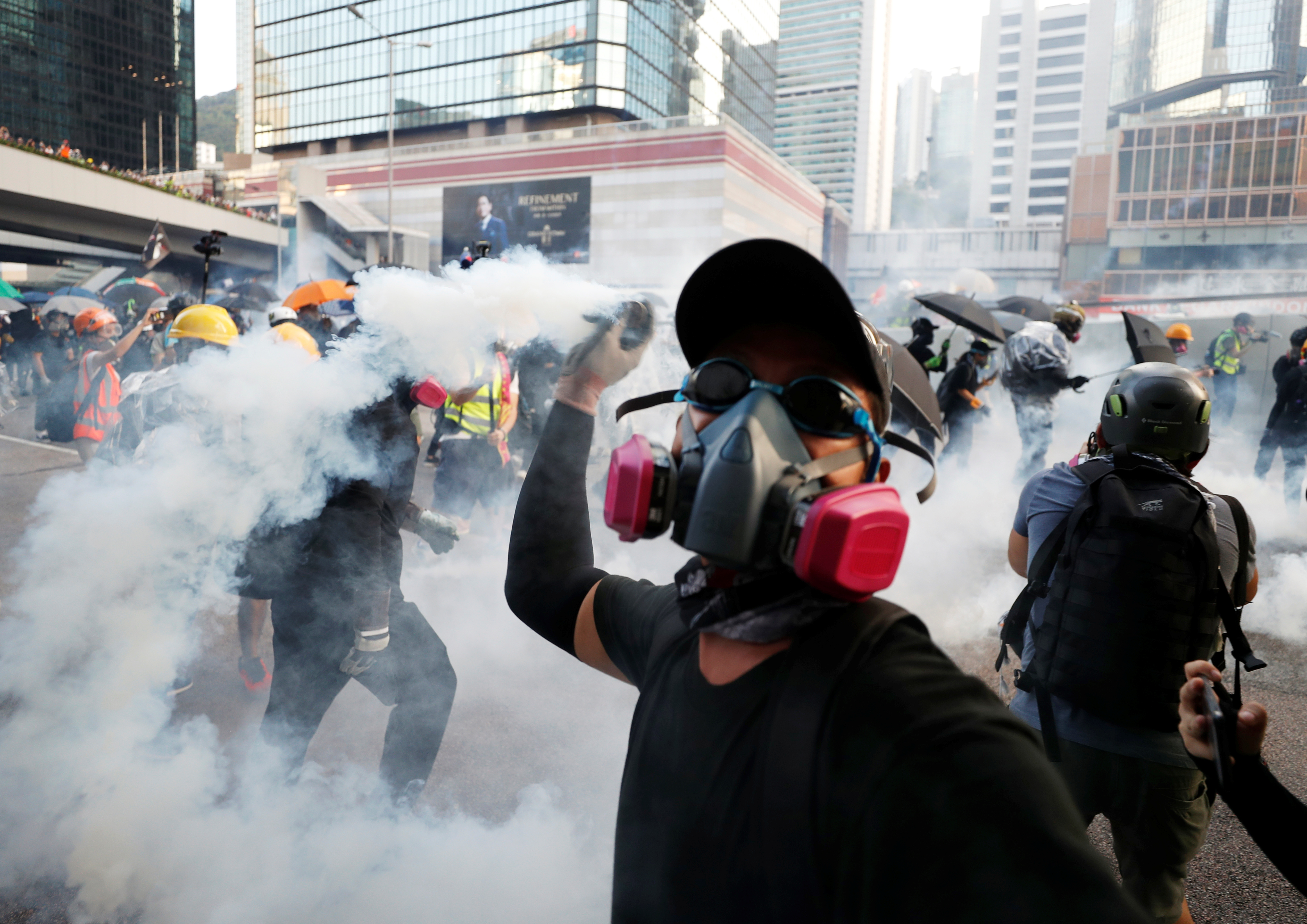 What’s going on deep down in Hong Kong? For a former resident with deep cultural and emotional ties to the Fragrant Harbor, it’s quite hard to take it all in just within the framework of cold geopolitical logic. Master filmmaker Wong Kar-Wai once said that when he came up with the idea for Happy Together, he decided to shoot the story of his characters in Buenos Aires because that was as far away from Hong Kong as possible.

A few weeks ago I was walking the streets of far away Buenos Aires dreaming of Hong Kong. That Hong Kong that Wong Kar-Wai refers to in his masterpiece no longer exists. Unfortunately deprived of Christopher Doyle’s mesmerizing visuals, I ended up coming back to Hong Kong to find, eventually, that the city I knew also no longer exists.

I started my journey in my former ‘hood, Sai Ying Pun, where I lived in a studio in an average, slim, ultra-crowded Cantonese tower (I was the only foreigner) across the street from the beautiful, art deco St Louis school and not far from Hong Kong University. Although only a 20-minute walk over the hills to Central – the business and political heart of the city – Sai Ying Pun is mostly middle class with a few working-class pockets, only recently marching towards gentrification after a local MTR – subway – station was launched.

Mongkok, across the harbor in Kowloon, with an unfathomably large population density, is the haven of frenetic small business Hong Kong, always crammed with students in search of trendy bargains. In contrast, Sai Ying Pun is a sort of languid glimpse of Hong Kong in the 1950s: it could easily have been the set for a Wong Kar-Wai movie.

From retirees to Mrs Ling, the laundry lady – still there, but without her previous, sprawling cat population (“At home!”) – the refrain is unanimous: protests, yes, but they must be peaceful. In Kowloon the previous night I had heard harrowing stories of teachers brainwashing elementary school pupils into protest marches. Not at St Louis – they told me.

Hong Kong University is another story; a hotbed of protest, some of it enlightened, where the golden hit in humanities is to analyze China as a “perfect dictatorship” where the CCP did nothing but ratchet up crude nationalism, militarism and “aggression,” in propaganda and in dealing with the rest of Asia.

As we reach Central, the Hong Kong matrix of hyper turbo-capitalism, “protests” dissolve as an unwashed-masses, bad-for-business, dirty word, dismissed at the restaurants of the old, staid Mandarin and the glitzier Mandarin Oriental, the Norman Foster/IM Pei headquarters of HSBC and Bank of China, the headquarters of JP Morgan – with a swanky Armani outlet downstairs – or at the ultra-exclusive China Club, a favorite of old Shanghai money.

It’s on weekends, especially Sunday, that all of Hong Kong’s – and turbo-capitalism’s – internal contradictions explode in Central. Filipina maids for decades have been staging an impromptu sit-in, a sort of benign Occupy Central in Tagalog with English subtitles, every Sunday; after all they have no public park to gather in on their only day off, so they take over the vault of HSBC and merrily picnic on the pavement in front of Prada boutiques.

To talk to them about the protests amounts to a PhD on class struggle:

“It’s we who should have the right to protest about our meager wages and the kind of disgusting treatment we get from these Cantonese madames,” says a mother of three from Luzon (70% of her pay goes for remittances home). “These kids, they are so spoiled, they are raised thinking they are little kings.”

Virtually everyone in Hong Kong has reasons to protest. Take the cleaning contingent – who must do the heavy lifting after all the tear gas, burnt-out bins, bricks and broken glass, like on Sunday. Their monthly salary is the equivalent of US$1,200 – compared with the average Hong Kong salary of roughly $2,200. Horrible working conditions are the norm: exploitation, discrimination (many are from ethnic minorities and don’t speak Cantonese or English) and no welfare whatsoever.

As for the ultra-slim fringe practicing wanton destruction for destruction’s sake, they surely have learned tactics from European black blocs. On Sunday they set fire to one of the entrances to ultra-congested Wanchai station and broke glass at Admiralty. The “strategy”: breaking off MTR nodes, because paralyzing Chek Lap Kok airport – one of the busiest on the planet – won’t work anymore after the August 12/13 shutdown that canceled nearly 1,000 flights and led to a quite steep drop in passengers coming from China, Southeast Asia and Taiwan.

Two years ago, in Hamburg, Special Forces were deployed against black bloc looters. In France, the government routinely unleashes the feared CRS even against relatively peaceful Gilets Jaunes/Yellow Vest protesters – complete with tear gas, water cannons and supported by helicopters, and nobody invokes human rights to complain about it. The CRS deploy flash ball strikes even against the media.

Not to mention that any occupation of Charles de Gaulle, Heathrow or JFK is simply unthinkable. Chek Lap Kok, on a weekday, is now eerily quiet. Police patrol all the entrances. Passengers arriving via the Airport Express fast train must now show passport and boarding pass before being allowed inside the terminal.

Western media accounts, predictably, focus on the radical fringe, as well as the substantial fifth-columnist contingent. This weekend a few hundred staged a mini-protest in front of the British consulate asking, essentially, to be given asylum. Some of them are holders of British National Overseas (BNO) passports, which are effectively useless, as the provide no working or residency rights in the UK.

Who are these people? Well, that necessarily brings us to a crash course on homo Hong Kong.

Not many people in Hong Kong can point to ancestors in place before the Opium War of 1841 and the subsequent rule of imperial Britain. Most don’t know much about the People’s Republic of China, so essentially there’s no grudge. They own their own homes, which means, crucially, they are insulated from Hong Kong’s number one problem: the demented, speculative property market.

Then there are the old China elites – people who fled Mao’s victory in 1949. At first they were orphans of Chiang Kai-shek. Then they concentrated on hating the Communist Party with a vengeance. The same applies to their offspring. The ultra-wealthy gather at the China Club. The less wealthy at least can afford $5 million apartments at The Peak. Canada is a preferred destination – hence Hong-Couver as a substantial part of Vancouver. For them Hong Kong is essentially a transit stop, like a glitzy business lounge.

It’s this – large – contingent that is behind the protests.

The lower strata of the Escape from China elites are the economic refugees of 1949. Tough luck: still today they don’t own property and have no savings. A great many of the easily manipulated teenagers taking over the streets of Hong Kong dressed in black and singing “Glory to Hong Kong” and dreaming of “independence” are their sons and daughters. It’s certainly a cliché, but it does apply to their case: trapped between East and West, between an Americanized lifestyle on steroids and the pull of Chinese culture and history.

Hong Kong cinema, with all its pulsating dynamism and exhilarating creativity, may offer the perfect metaphor to understand the inner contradictions of the Fragrant Harbor. Take Tsui Hark’s 1992 masterpiece New Dragon Gate Inn, with Donnie Yen and gorgeous Maggie Cheung, based on what happened at a crucial pass in the Ancient Silk Road six centuries ago.

Here we may place Hong Kong as the inn between imperial despotism and the desert. Inside, we find fugitives imprisoned between their dream of escaping to the “West” and the cynically exploitative owners. That connects with the ghostly, Camus-infused existential terror for the modern homo Hong Kong: soon he may be liable to be “extradited” to evil China before he has a chance to be granted asylum by the benevolent West. A fabulous line by Donnie Yen’s character sums it all up: “Rain in the Dragon Gate mountains makes the Xue Yuan tiger come down.”

Good to be a tycoon

The drama played out in Hong Kong is actually a microcosm of the Big Picture: turbo-charged, neoliberal hyper-capitalism confronted to zero political representation. This “arrangement” that only suits the 0.1% simply can’t go on like before.

In fact what I reported about Hong Kong seven years ago for Asia Times could have been written this morning. And it got worse. Over 15% of Hong Kong’s population now lives in actual poverty. According to figures from last year, the total net worth of the wealthiest 21 Hong Kong tycoons, at $234 billion, was the equivalent of Hong Kong’s fiscal reserves. Most of these tycoons are property market speculators. Compare it to real wages for low-income workers increasing a meager 12.3% over the past decade.

Beijing, later rather than sooner, may have awakened to the number one issue in Hong Kong – the property market dementia, as reported by Asia Times. Yet even if the tycoons get the message, the underlying framework of life in Hong Kong is not bound to be altered: maximum profit crushing wages and any type of unionization.

So economic inequality will continue to boom – as an unrepresentative Hong Kong government “led” by a clueless civil servant keeps treating citizens as non-citizens. At Hong Kong University I heard some serious proposals:

“We need a more realistic minimum wage. “We need real taxes on capital gains and on property.” “We need a decent property market.”

Will that be addressed before a crucial deadline – October 1st – when Beijing will be celebrating, with great fanfare, the 70th anniversary of the People’s Republic of China? Of course not. Trouble will continue to brew at the Dragon Inn – as those underpaid, over-exploited cleaners face the bleakest of futures.