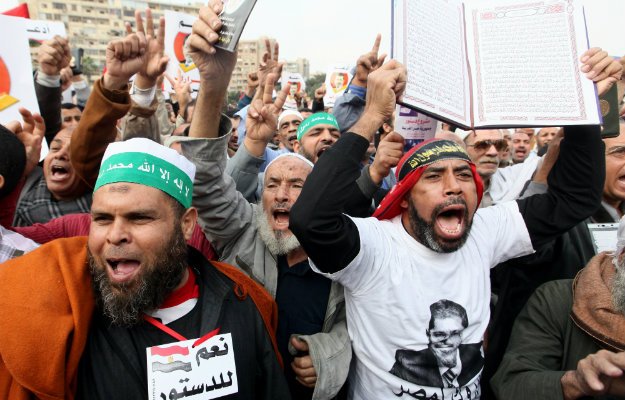 The global threat of the Muslim brotherhood

The Muslim Brotherhood is a political group with offices around the world and throughout the USA. Their official website and platform states they believe the Koran to be the only global constitution, and Islamic Law (Shariah) to be the only law of the world. Their goal, as they have stated publically, is to abolish all secular government, and institute an Islamic State as the only global government.

If we tell them this is absurd, and it is wrong, and can’t be anyone’s goal, we are in essence telling them that their religion is not good and should not be followed. That becomes a religious dispute and not a political dispute. I feel that Islam is excellent and that anyone can follow Islam anywhere on earth, and be the best citizen of any country.

But, Jihad and Islamic law do not have to be followed as the “Civil Law”. For example, the “Law” in Syria and USA states murdering your neighbor is against the law, and you will be punished for it. You can not hide behind “Jihad” to justify murder in the name of “God”. Jihad and Islamic law can be studied, accepted, and believed in as a religious teaching, but does not need to be put into action when conflicting with a CIVIL LAW.

This is why Syria needs to remain a secular form of government, which respects all religions equally. The US-NATO attack on Syria was to remove a secular gov’t and replace it with a Muslim Brotherhood gov’t, and that would have been a close ally with Israel. Netanyahu passed a law stating that the name of Israel is to be “The Jewish State of Israel”. He had wanted, and supported, the attack on Syria for the end purpose of Syria becoming known as “The Sunni State of Syria”. His goal was not achieved, and his side lost.

Many Americans do not understand that the men in fancy suits, and owners of the biggest companies, offices, and even political people all with advanced university degrees, appearing to be a ‘model citizen’ in Los Angeles, Dearborn, Houston, and Washington, DC are in fact followers of the Muslim Brotherhood creed. Americans think that they should be afraid of TERRORISTS with guns attacking in USA, or Canada, or Europe. No, you are failing to understand you are currently surrounded by the very people who are working to change your secular gov’t to an Islamic State. They never look like terrorists: they all are “dressed for success”.

All you need to do is chit-chat with a Facebook friend you may have who lives in the United Kingdom. They will tell you how they are everywhere, and in the highest positions.

This article was originally published on mideastdiscourse.com