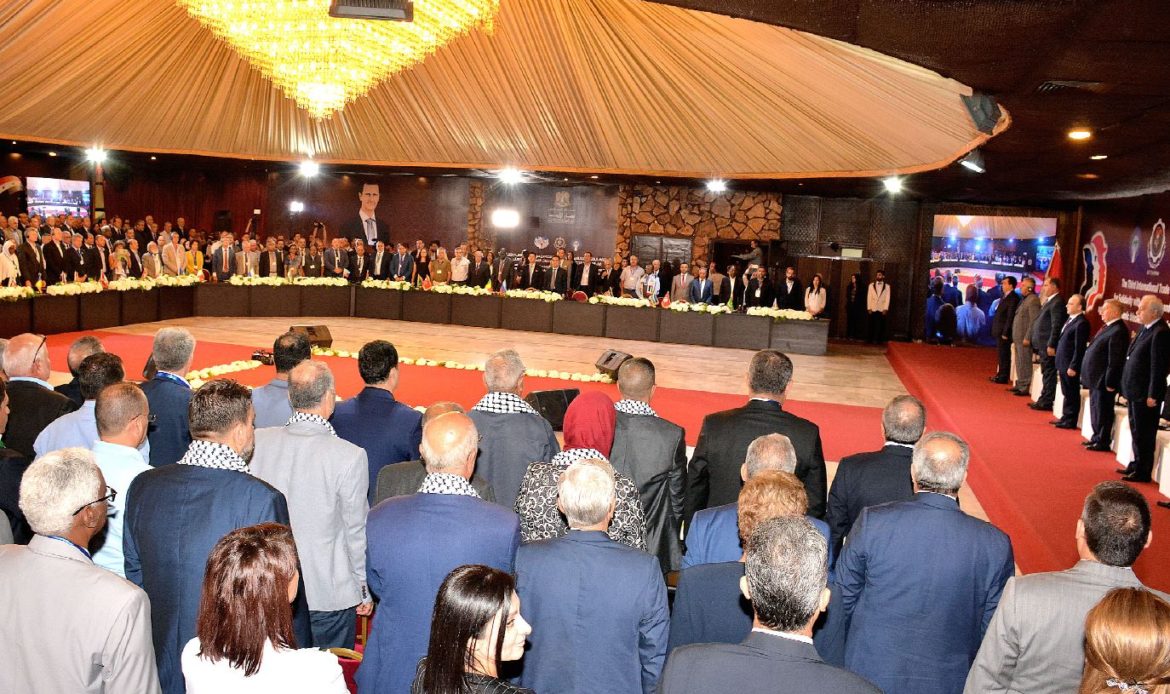 Despite Washington’s best efforts to isolate and destroy Syria, trade unionists have led a breakthrough in international solidarity with the independent nation.

A two-day trade union conference in Damascus (8-9 September 2019) focussed on building international solidarity to resist foreign aggression, including economic war. More than 200 delegates from more than 40 countries, and from about 90 organizations, participated. Most were from the Arab and African regions, but notable was the presence of dozens of unionists and labor organizers from Europe and North America.

The theme of the conference was ‘Solidarity with the Syrian workers and people to break the economic sanctions and in rejection of imperialist interventions and terrorism’. During the long war, many workers were killed and injured, and factories and livelihoods trashed, as part of a US-led war aimed at destroying the independent Syrian nation. Western-backed sectarian gangs, adopting Saudi Islamist ideology, targeted and slaughtered both religious minorities and government workers. The key sponsors of this war were the USA, the Saudis, Israel, Turkey, Qatar, France, and Britain. Many tens of thousands of foreign ‘jihadists’ were recruited to join in the aggression.

Dozens of delegates spoke at the conference sessions, which dealt with (1) the illegality of economic sanctions and coercive measures, (2) the importance of solidarity in combating terrorism and confronting imperialist interventions and (3) the role of trade unions, civil society organisations and media in exposing sectarian ideology, the ‘paid yellow media’ and the political hypocrisy of states that claim to fight terrorism while in reality supporting it.

The conference statement expressed its “deep appreciation for the steadfastness and sacrifices of the workers and people of Syria … [the] cohesion of the Syrian social fabric and the efforts of official and popular institutions and civil society organizations” in face of more than eight years of foreign aggression. It also recognized “the impressive victories achieved by the Syrian Arab Army and allied forces in the fight against terrorism throughout Syrian territory.” Videos were shown of the massacres of workers by foreign backed gangs, and the rehabilitation of injured workers and workplaces.

The conference condemned the US administration’s backing for the Zionist annexation of Jerusalem and the Golan, and condemned the repeated Israeli aggressions against Gaza, Lebanon, Syria and Iraq. It condemned the reactionary alliance against the people of Yemen, while saluting the steadfastness of the peoples of Cuba, Venezuela, Nicaragua and Bolivia, against imperialist attacks and provocations. It condemned the US and Israeli backed QASAD (SDF) militia for its crimes against the Syrian people and its collaboration with the Erdogan regime’s attempts to excise northern parts of the country. The conference called on the peoples of the world to confront and expose the paid media “which twist facts and justify aggression under false slogans”.

On the last day of the conference, the delegates visited President Assad in the capital. After short speeches, there was an extended question session.

In his opening speech, the Syrian President stressed the role of the Syrian workers, as key participants in society. Production depended on them; their dignity and livelihoods were at the center of Syrian society. The GFTU was an “independent partner” with the government.

For its part, the US itself was becoming increasingly isolated, its ‘sanctions’ were not as powerful as 20 years ago, because there are now alternate sources of products and technology, the President said. A different world was emerging, with new networks. For example Russia is developing a new banking system which will attract other countries.

Questioned about a possible broadening of Syria’s finance links to Iran President Assad replied that Syria’s credit line with Iran was quite specific; however other bilateral arrangements are being discussed with countries including Venezuela and Russia.

A Turkish opposition and trade union figure stressed that the Erdogan administration’s aggression towards Syria did not reflect the views of Turkish workers. President Assad said his government always distinguished between Erdogan’s Muslim Brotherhood regime and the Turkish people.

US journalist Max Blumenthal asked why Syria had not hit back, after hundreds of attacks by Israel. President Assad replied that the terrorist groups had constantly attacked air defenses in Syria (at one time they lost more than 50%), so it was clear with whom they were working. Syria was still modernizing its air defense, there was “still a lot to do” as “we need advanced systems”. At times Syria has been able to knock out 50% to 90% of Israeli missiles. But the country’s first priority was to deal with the terrorists; countering Israel is a longer-term plan.

An Iranian MP asked about Idlib and the US sanctions. The President repeated his statement that “every part of Syria” would be liberated and that the military was preparing for further advances in Idlib, after the liberation of Khan Sheikhoun. The recent US attack on Idlib had been coordinated with the al Nusra leader Jolani, to wipe out a rival jihadist group.

More broadly, building patriotic awareness and education were linked to victory, so that youth could not easily be recruited as mercenaries. On sanctions, President Assad said the banks were really the rulers, in both the USA and France. Macron, for example, was a creature of the banks. The US banks in particular held power, linked to the dominance of the US dollar and to US monopolies on certain technologies.

US ‘Labour Against War’ organizer Yasemin Zahra asked the President if he had any message for US workers. He replied that there should be some kind of national dialogue in the US, to show and highlight the voice of the US working class, which most often seemed invisible to those outside the USA.