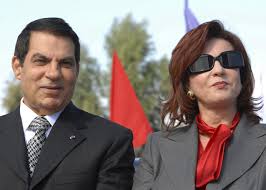 After President’s Death in Saudi Arabia, Will Tunisia Recover $60 Mln in Gold Looted By His Widow?

The so-called Arab Spring began in December 2010 when a Tunisian fruit vendor, Mohamed Bouazizi, set himself on fire in protest at harassment by the police. A month later Tunisia’s President Zine El Abidine Ben Ali fled into exile in Saudi Arabia.

His wife Leila Trabelsi, a former hairdresser, was one of the most reviled women in North Africa when she fled with him after they were ousted.

​Her family and that of her US-backed husband was at the heart of the corruption which infected Tunisia during Ben Ali’s rule and her nephew was hacked to death by a mob in January 2011.

​Ironically Trabelsi’s father had been a fruit and nut purveyor in the medina in Tunis and the uprising which overthrew her was sparked by the harassment of a young fruit vendor, Mohamed Bouazizi.

When she was finally forced to fly into exile on 14 January 2011 Trabelsi, then 53, reportedly took with her one and a half tons of gold bars, worth $60 million, from the Central Bank of Tunisia.

Catherine Garcet, who wrote a book about Trabelsi, told The Guardian: “True or not, it’s very believable. That’s the sort of thing Leila Trabelsi would do. What’s more, she wouldn’t have the slightest qualm about doing it.”

Saudi Arabia has been a sanctuary for several deposed leaders from the Islamic world – Uganda’s Idi Amin died there in 2003, 24 years after fleeing from invading Tanzanian tanks, Pakistan’s Nawaz Sharif fled there in 1999 after a military coup and Yemen’s ousted President Abd Rabbuh Mansur Hadi lives there and is directing a war against the Iranian-backed Houthi rebels.

Ben Ali took power in Tunisia in 1987 from his former mentor, Habib Bourguiba, who was showing signs of dementia.

Five years later Ben Ali, whose first wife had died in 1988, married Leila and over the next three decades they consolidated political and financial power in their hands.

Daniel Lebegue, head of Transparency International’s French branch, told the BBC in 2011: “Our Tunisian lawyer friends tell us that the Ben Ali and Trabelsi families controlled between 30 percent and 40 percent of the Tunisian economy. So a simple calculation allows us to say we’re looking at about $10 billion (£6 billion).”

When they were finally overthrown by people power in January 2011 some of their relatives fled into exile but her brothers Moncef and Mourad were arrested and her nephew Imed was killed.

In June 2011 Ben Ali and his wife were sentenced to 35 years in prison in absentia for embezzlement and the Swiss government has frozen millions of dollars in her family’s bank accounts.

Trabelsi has three children and her son-in-law, Sakher El Materi, built up a huge industrial empire in Tunisia before fleeing to the Seychelles.

​Leila’s eldest brother Belhassen, believed to be worth billions, is thought to be in Canada.

So what happens now?

Saudi Arabia will want to maintain good relations with Tunisia but will it go as far as extraditing Leila back to Tunis?

Or could she bounce back like Imelda Marcos, another famous dictator’s widow who embezzled millions of dollars and famously had 2,700 pairs of shoes.

In 1986 Imelda and her husband Ferdinand fled the Philippines after an uprising and went into exile in Hawaii.

Ferdinand died three years later but in 1991 Imelda was allowed to return to the Philippines, was not prosecuted and even ran in the presidential election the following year.

Imelda, now 90, still lives in the Philippines and her son Ferdinand junior, better known as Bongbong, is a senator who ran for Vice President in 2016.

Economists warn Trudeau and his cabinet that the economy is set to ‘slow significantly’.