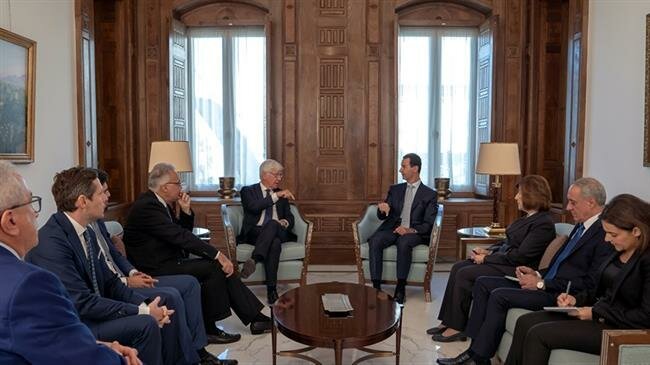 Assad: US, allies lost hope in achieving goals in Syria

Syrian President Bashar al-Assad says the United States and its Western allies have lost hope in achieving the goals they had once planned to achieve in the Arab country.

The Syrian leader made the remark during a meeting with a delegation from Iran headed by Ali Asghar Khaji, senior assistant to the Iranian foreign minister on special political affairs, in the Syrian capital, Damascus, on Tuesday.

Assad added that, after some eight years of foreign-backed militancy in Syria, the US and its allies were now attempting to deplete the resources of the Arab country, the same policy he said was being currently employed against Iran.

During the meeting, the Iranian delegation briefed the Syrian president on the details of the tripartite meeting of the presidents of Iran, Russia, and Turkey that was held in Ankara last week, going over what had been discussed there regarding the situation in Idlib as well as the committee for discussing a new Syrian constitution.

Assad emphasized the importance of continuing constructive coordination among Damascus, Tehran, and Moscow regarding the various issues concerning the Arab country and the region.

He said Syrian-Iranian-Russian coordination had led to the successful formation of the constitutional committee despite the obstacles imposed by the sides that supported terrorism.

The Syrian leader also said that with each political and military success achieved, there would be more attempts to complicate issues, adding, “But at the same time, we are becoming more powerful and more efficient.”

Khaji, for his part, said that Tehran was continuing coordination and discussions with the Syrian leadership, reiterating the Iranian leadership’s appreciation of the achievements of the Syrian army on the ground.

The Iranian official also stressed that the Islamic Republic continues to support the Syrian government in order to ensure the safety, stability, sovereignty, and territorial integrity of the Arab country.

The conflict has largely wound down recently.