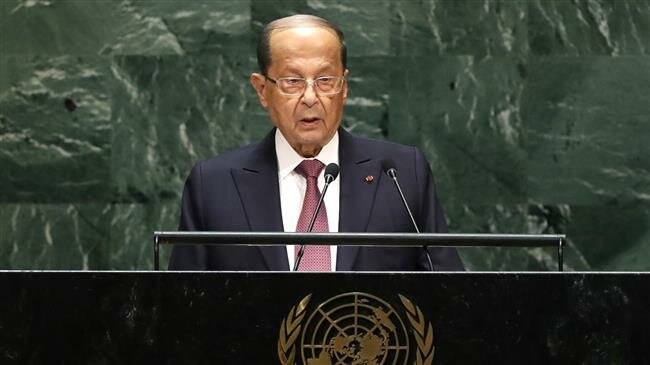 Lebanese President Michel Aoun has calls on world leaders to work on safe return of Syrian refugees, stressing that addressing the issue is “not the sole responsibility of Lebanon.”

Addressing the 74th session of the United Nations General Assembly in New York on Wednesday, Aoun said the Beirut government may undertake return process in agreement with the incumbent Damascus administration, when needed, to solve this dilemma which threatens Lebanon’s our entity and existence.

More than one million Syrian refugees are registered with the United Nations High Commissioner for Refugees (UNHCR) in Lebanon.

The Beirut government estimates that the true number of Syrians in Lebanon stands at 1.5 million.

In February, Lebanon’s minister of state for displaced affairs said his country would stick primarily to a Russian strategy for the return of Syrian refugees to their homeland.

“The Russian strategy will be adopted as a basis for our approach towards the return of Syrian refugees to Syria,” Saleh Gharib told China’s official Xinhua news agency on February 6.

He also did not deny the possibility of visiting Syria, or conducting a direct dialogue with high-ranking government officials in Damascus to secure the return of Syrian refugees.

“Lebanese Prime Minister Saad Hariri is very much aware of the sensitivity of this issue, and all necessary steps will be taken in this regard,” Gharib said.

The strategy to help Syrian refugees go back to their homes was drawn up following a meeting between US President Donald Trump and his Russian counterpart Vladimir Putin in the Finnish capital city of Helsinki on July 16, 2018.

It specifies about 76 residential neighborhoods in Syria’s central provinces of Homs and Hama, the northwestern province of Idlib as well as Damascus to enable the return of 360,000 Syrian refugees as a first step.

The strategy also entails the rehabilitation of houses in the mentioned areas, which would allow the return of 500,000 more Syrian refugees within two years.

Aoun then reiterated that Lebanon holds on to “its sovereign rights over the Israeli-occupied Sheba’a Farms, Kfarchouba village as well as the northern section of Ghajar village.

He also noted that the Israeli regime encroaches upon Lebanon’s sovereignty and airspace, using military aircraft and unmanned aerial vehicles.

The Lebanese president then censured the Tel Aviv regime’s activities in the Middle East region as flagrant violation of United Nations principles and resolutions.

Aoun also emphasized that Israeli atrocities and policies in the occupied Palestinian territories hinder any chances of peace in the Middle East.