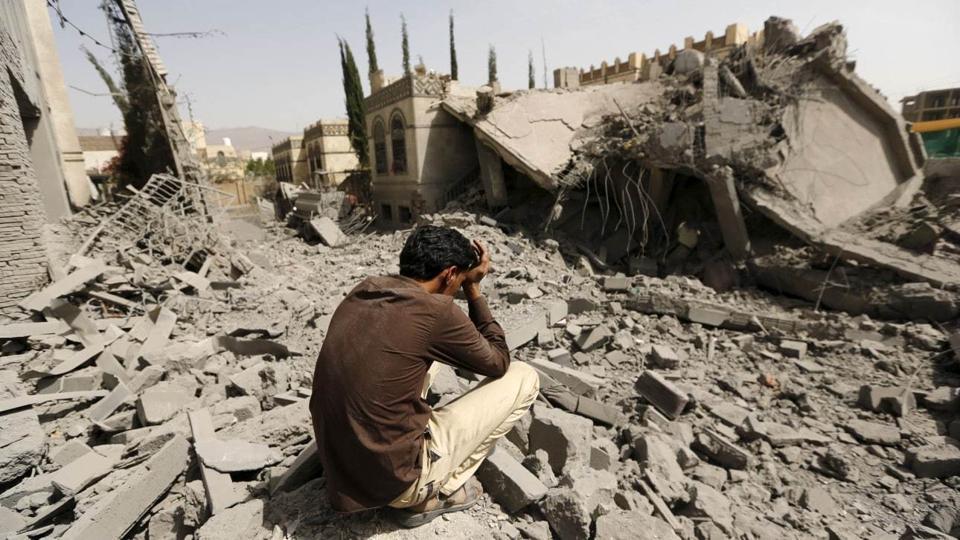 Saudi-led coalition air strikes killed seven children in Yemen on Tuesday, a local official and doctor said The seven children were among 16 people killed during the air strike, as Saudi Arabia continues to pound the country already facing a humanitarian disaster.

“Sixteen people, including women and children, were killed and nine others injured” in a raid targeting a home in Daleh, a local official told AFP on condition of anonymity.

A doctor at Al Thawra hospital in nearby Ibb province, which received the bodies of those killed, told AFP that seven children and four women were among them.

The Houthi rebels condemned the coalition for its “continued aggression” against the Yemeni people.

“The aggressors do not understand the message of peace… but only messages of drones and of missile power,” said a statement carried by the rebels’ Al Masirah television.

The victims were in an apartment in Al Fakher, in the southern district of Qataba, Al- Daleh province. One of the injured children lost her entire family in the explosion. After the attack, most injured were brought to a hospital supported by Save the Children.

Save the Children, whose staff treated some of the casaulties, said one of the wounded children had lost her entire family in the explosion. The aid group called for an urgent investigation into the attack on the civilian area and said it “simply cannot accept that such an atrocity is carried out with impunity.”

“Attacks like this happen almost on a daily basis – the use of explosive weapons in populated areas is sadly all too common in the Yemen conflict… Only yesterday four children were killed in another attack in Amran that killed an entire family, including a pregnant mother,”

Tamer Kirolos, Country Director for Save the Children in Yemen, said.

“These children should not be victims of this conflict. Yet, they have paid the highest price imaginable. We’re calling for an independent investigation into the attack and for perpetrators to be held to account.”

The coalition could not be immediately reached for comment.

The raid came days after the Houthis offered to halt drone and missile attacks on Saudi Arabia as part of efforts to end Yemen’s ongoing civil war.

The group claimed responsibility for attacks on Saudi oil installations that knocked out half of Riyadh’s oil production.

The United States and Saudi Arabia, however, blamed Iran, saying the strikes were carried out with advanced cruise missiles and drones.

Britain also claimed that the Saudi oil facility attacks were not perpetrated by Houthi rebels.

Tuesday’s air strikes on Qatabah, in southern Yemen’s Daleh province, which is partly controlled by the Houthis, marked the first major attack believed to have been carried out by the coalition since the group’s offer was made.

Saudi Arabia had given a cautious response on Saturday to the Houthis’ offer to de-escalate.

“We judge other parties by their deeds, actions and not by their words, so we will see (whether) they actually do this or not,” said Saudi Minister of State for Foreign Affairs Adel al-Jubeir.

“Regarding what prompted them to do this… we have to do more intensive studies,” he said at a news conference in Riyadh.

The UN Special Envoy for Yemen Martin Griffiths welcomed the rebels’ proposal, saying it could bring an end to the bloody conflict.

Its implementation “in good faith could send a powerful message of the will to end the war”, he said.

Tens of thousands of people, most of them civilians, have been killed since Saudi Arabia and its allies intervened in March 2015 in support of the beleaguered government after the rebels captured the capital Sanaa.

The fighting has left 24.1 million – more than two-thirds of the population – in need of aid.

The United Nations has described Yemen as the world’s worst humanitarian crisis.

The original source of this article is Middle East Eye