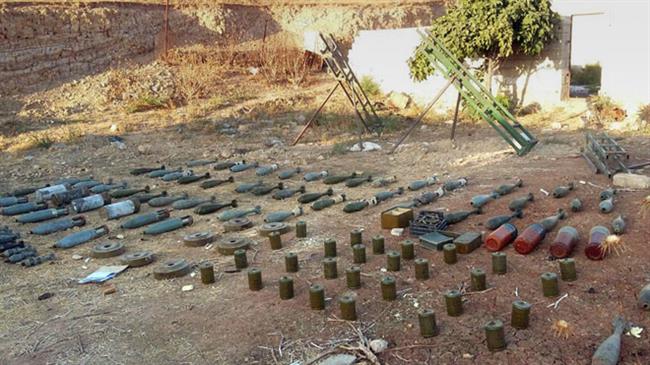 Syrian government forces have carried out a string of clean-up operations in the country’s west-central province of Hama, discovering US-built missiles, munitions produced by NATO member states and communication devices from former strongholds of Takfiri terrorists.

An unnamed military source told reporters that Syrian soldiers launched an operation in al-Lataminah town, located 39 kilometers northwest of the provincial capital city of Hama, on Thursday to clear the area of hidden explosive devices and ordnance left behind by militants, the Arabic service of Russia’s Sputnik news agency reported.

The source added that the weapons were hidden inside a cave, which was part of a long underground network that used to accommodate some five thousand militants. Terrorists purportedly used it as a base to launch attacks on government forces.

Local officials found that the network had been dug by terrorists, with the help of foreign machinery, more than four years ago, the source added.

Separately, government army units uncovered caches of arms in addition to anti-personnel and anti-tank mines that were used by foreign-sponsored Takfiri militants in the same Syrian province.

Elsewhere in the southern town of al-Harra, Syrian army forces found weapons and telecommunication devices left behind by terrorists.

A local source, requesting not to be named, that the seized weapons included rocket launchers, anti-tank missiles, assault rifles, machine guns, rocket-propelled grenades, artillery shells, mortar shells, telecommunication devices, and night-vision goggles.
Syria has been gripped by foreign-backed militancy since March 2011. The Syrian government says the Israeli regime and its Western and regional allies are aiding Takfiri terrorist groups that are wreaking havoc in the country.