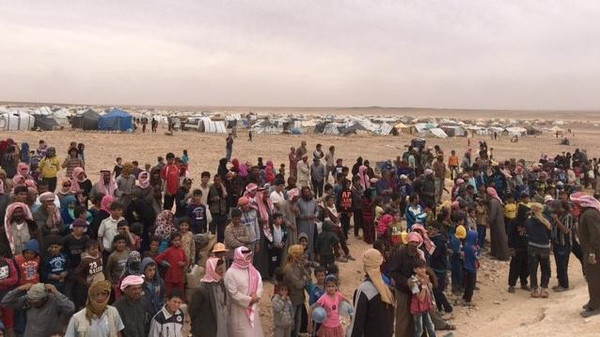 Syrian families held captive by Trump Regime Forces and their ISIS affiliates of Maghaweer Thawra terrorists at al-Rukban Concentration Camp went out of their tents in the high heat of the desert to protest for food the day before yesterday, 11th of September, they were faced with live bullets by the US occupation forces.

Russian Coordination Center called on the US occupation forces in Rukban Concentration Camp to exert pressure on US-sponsored Maghaweer Thawra terrorists to stop their terrorist acts against the displaced Syrians held in the camp, these terrorist acts have exacerbated the already dire humanitarian situation of the families there.

A statement by the head of the Russian Coordination Center Major General Alexei Bakin stated: ‘We urge the US command in Al-Tanf area to exert pressure on the terrorist groups under its influence to secure the safety of the refugees at Rukban, and to distribute evenly the humanitarian aid, and to arrange for the swift evacuation of the displaced who are still in the camp.’

The Russian military official pointed out that ‘the Syrian state in cooperation with Russia and the United Nations continue to make every effort to resolve the humanitarian crisis in the camp Rukban, which is witnessing a situation is greatly complicated by the practices of terrorist groups supported by the US occupation forces.’

Major General Bakin added: ‘according to information received from the residents of Rukban camp, these terrorist groups forcibly seized a large part of the humanitarian aid that was delivered to the camp in the previous days by the representatives of the United Nations and the Syrian Arab Red Crescent.’

The terrorists have stolen the aid and stored it in one of its headquarters in Al-Tanf area.

The Syrian Arab Red Crescent (SARC) in cooperation with the United Nations on the eighth of this month, managed to deliver a humanitarian convoy to the US-IS styled Rukban Concentration Camp. The camp is located in Al-Tanf area at the farthest southeast of Syria deep in the desert. The aid consisted of 22 trucks loaded with food relief materials including 3,100 food baskets, 3,100 bags of flour of 50 kg each, high-energy of dates biscuits and peanut butter.

Syria has constantly condemned and called on the United Nations to pressure the US occupying forces in Syria to leave the country voluntarily where it is acting as a destabilizing force violating Syria’s sovereignty establishing camps within Syrian territories against international law, against the UN charter which the US should honor and protect being a permanent member of the UNSC not to be the one breaching it. The Syrian state has relentlessly and repeatedly called on the US forces to free the civilians in the concentration camps of Rukban and Al-Houlit runs in southeast and northeast of the country respectively.

The original source of this article is SyriaNews