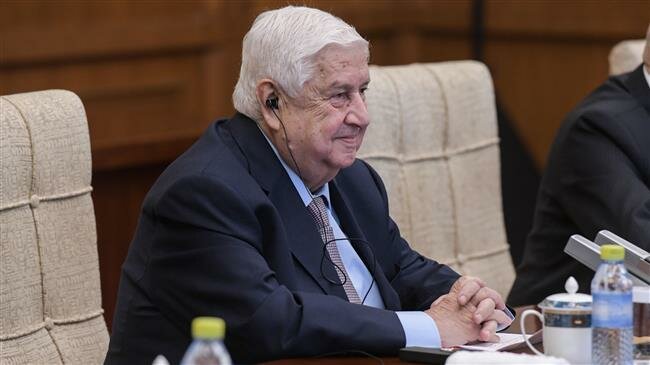 Syrian Foreign Minister Walid al-Muallem says the Damascus government does not accept any foreign interference in the work of a constitutional committee on Syria, which will include members of President Bashar al-Assad’s government and foreign-sponsored opposition representatives.

He added, “But if we don’t reach an agreement with the other side, we don’t mind discussing another constitution, but not a ready-made one.”

The top Syrian diplomat further noted that the Damascus government abides by the principles of the constitutional body announced a few days ago, and does not accept any violation, as it views the new committee a significant achievement for the Syrian nation.

Muallem highlighted that imposition of a deadline on the new constitutional committee will make the process of drafting a post-war constitution hasty.

“It is well-known that the constitution draws the road of future for the current and coming generations. Therefore, we want a clear, careful and modern constitution and we don’t want to rush in drafting it,” he pointed out.

On September 23, United Nations Secretary General Antonio Guterres said an agreement had been reached between the government of Syria and the so-called the Syrian Negotiation Commission – an umbrella opposition group supported by Saudi Arabia, on “a credible, balanced and inclusive constitutional committee.”

“It will be facilitated by the United Nations in Geneva,” Guterres told reporters, adding that it would be convened in the coming weeks.

Damascus maintains that the constitutional committee should be a purely Syrian affair to be decided by the Syrian people alone without any foreign interference.

In February, the United Nations special envoy for Syria, Geir Pedersen, said that he saw a constitutional committee as “the potential door-opener for the political process.”

Last year, an agreement was made in the Russian town of Sochi for the formation of the UN-backed constitutional committee composed of 50 members from the incumbent Damascus government, 50 opposition members, and another 50 independent figures chosen by the UN.