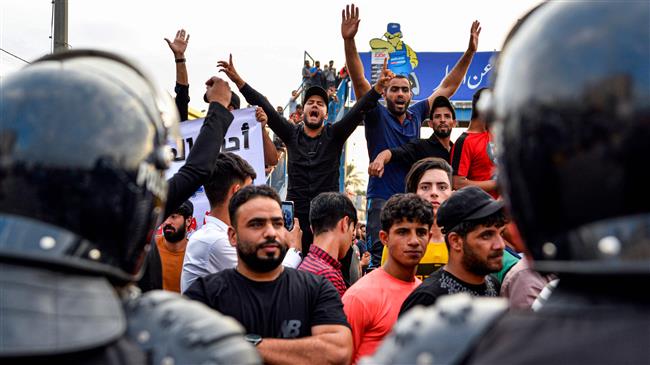 At least two people have been killed and 200 others sustained wounds in a protest rally against alleged corruption in Iraq’s capital city of Baghdad.

More than 3,000 people took to the streets in central Baghdad on Tuesday to protest alleged corruption, unemployment, poor public services, and other grievances.

Iraq’s Ministry of Health said in a statement that 160 civilians and 40 security forces were injured in the clashes.

The Iraqi government in a statement blamed “groups of riot inciters” for the violence and said security forces had tried to ensure the safety of peaceful protesters.

According to witnesses, police fired into the air as protesters attempted to cross a bridge leading into Baghdad’s fortified Green Zone, which houses government buildings, including the Iraqi parliament, and foreign embassies.

When warning shots and stun grenades failed to prevent a group of protesters from crossing the bridge, security forces opened live fire against the crowd, witnesses added.

Similar but smaller rallies were held in some other cities of Iraq, including Najaf and Nasiriya, on Tuesday.

Some Iraqis blame officials for what they call prevalent corruption that is blocking the country from recovering after years of bloody terrorism perpetrated by the Takfiri Daesh terrorist group.