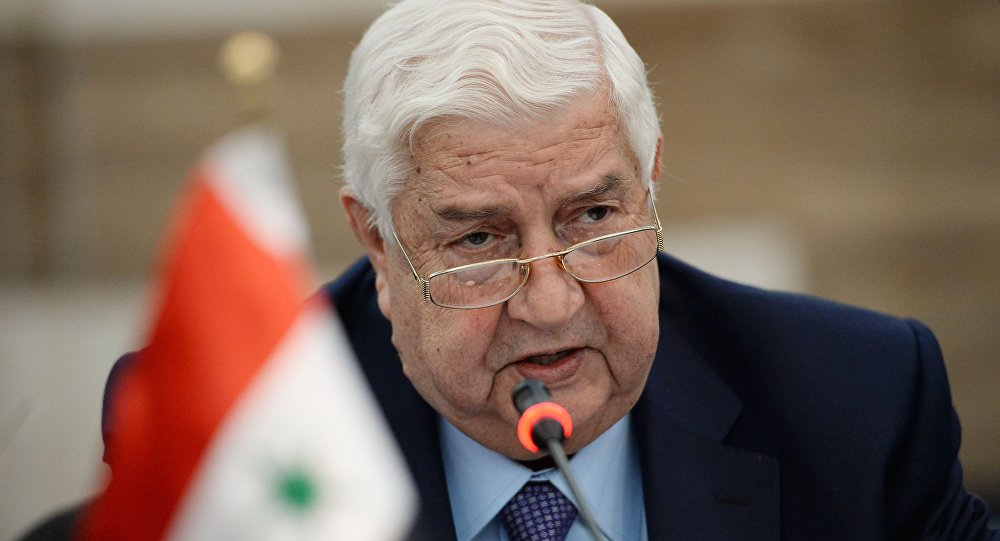 Muallem vows to ‘liberate every inch’ of Syria from terrorists

In a recent interview with Lebanon-based al-Mayadeen television news network, the top Syrian diplomat said “every inch” of the Syrian territory will be liberated from terrorists very soon.

Al-Muallem said terrorists positioned in the country’s northwestern province of Idlib had lost “numerous opportunities for the settlement of crisis” after they failed to honor a ceasefire and continued to target civilian neighborhoods.

His remarks came as Syria’s army launched ground operations inside Idlib and adjacent areas which are under the control of foreign-backed terrorists.

Syria has stepped up its bombardment of militant hideouts in the northwest. Idlib, along the border with Turkey, is the last remaining bastion of foreign-backed terrorists.

The so-called National Front for the Liberation of Syria is the main Turkish-backed militant alliance in the Idlib region.

Muallem said that “despite the Syrian army’s agreement to truce in Idlib and efforts exerted in this regard, Ankara has failed to fulfill its obligations.”

US troops have long been providing Kurdish YPG militants with arms and training, calling them a key partner in the purported fight against Daesh. Many observers, however, see the support in the context of Washington’s plans to carve out a foothold in the Arab country.

Such support has also angered Ankara which views YPG militants as a terrorist organization tied to Kurdistan Workers’ Party (PKK) that has been waging a destructive war inside Turkey for decades.

Turkey seeks to establish a 32-kilometer (20-mile) safe zone in northern Syria, and has stressed that it wants the Kurdish militants cleared from the region.

The Syrian government, which is opposed to Turkish and US military activities on its soil, sees their presence as a violation of its sovereignty and territorial integrity as well as international law.

Observers say a US plan to set up a joint command center with Turkey to coordinate a so-called safe zone in Syria is aimed at blocking the Syrian army’s advances on the battlefield against foreign-backed militants.

Al-Muallem said he expected the Turkish government to implement what was agreed upon in a series of agreements among the guarantor states which are Iran, Russia and Turkey in recent years.

“Turkey should choose either to be a neighboring state or a hostile state to Syria,” he said.

Al-Muallem also chided Western states for refusing to take back its members of the Daesh terrorist group.

He called on the West to take responsibility for its nationals, including thousands of children of Daesh terrorists, who are stuck at a camp controlled by US-backed militants in northeast Syria.

“Western states have been encouraging the flow of terrorists to Syria as they have provided all the facilitation for them, and now after their defeat, they don’t want them to return,” he said.

Elsewhere, al-Muallem said Syria does not not accept any foreign interference in the work of a constitutional committee, which will include members of President Bashar al-Assad’s government and foreign-sponsored opposition representatives.

Damascus maintains that the constitutional committee should be a purely Syrian affair to be decided by the Syrian people alone, without any foreign interference.

Syria has been gripped by foreign-backed militancy since March 2011. The Syrian government says the Israeli regime and its Western and regional allies are aiding Takfiri terrorist groups wreaking havoc in the country.