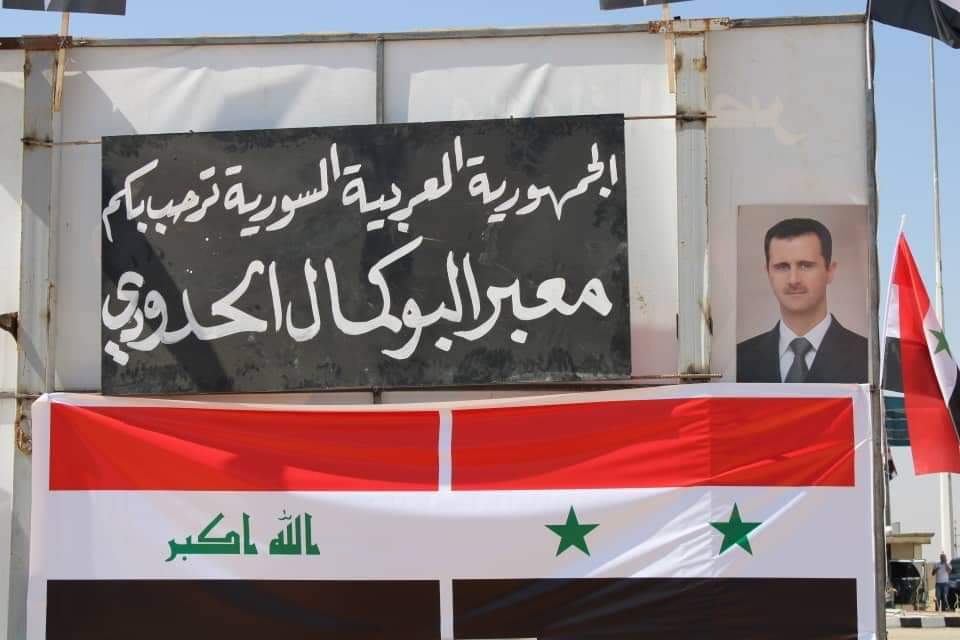 The border-crossing between Abu Kamal on the Syrian side and Qaim on the Iraqi side has reopened after eight years of closure.  Military commanders from both armies met at the opening ceremony resplendent with flags, rope cutting, and handshakes.

Syrian Interior Minister Mohammad Khaled al-Rahmoun declared it a victory over terrorist groups, and Iraqi border authority chief Khadhim al-Ikabi looked forward to renewed economic prosperity. The crossing is an economic artery of trade and movement of people, and a new trade zone is being built on the Iraqi side of the border at Qaim, which is slated to be completed in under a month.

The Iraqi militia, Popular Mobilisation Forces (PMF), who are allied with Iran, will be working to keep the crossing secure, which is a land bridge that links Tehran, Baghdad, Damascus, and Beirut, providing Iran’s access to the Sea.  In early spring, Iranian President Hassan Rouhani visited Iraq and both sides discussed economic cooperation, as Iraq relies on goods and electricity supplies from Iran. A railway project is underway linking the Imam Khomeini port in Iran with the port of Latakia in Syria, which passes through Iraq.

Syrian citizens belonging to the Kurdish ethnic group are employed as mercenaries by the US Pentagon.  The Syrian Democratic Forces (SDF) occupy the area east of Abu Kamal, and they also occupy the oil-rich northeast of Syria and control the al-Yaroubia crossing into Iraq.

The SDF also controls the crossing at Al-Tanf, which is south of Abu Kamal and is on the main highway connecting Damascus and Baghdad. Recently, at the UN General Assembly, Syrian Foreign Minister Walid al-Moallem said, “The United States and Turkey maintain an illegal military presence in northern Syria, and any foreign forces operating in our territories without our authorization are occupying forces and should withdraw immediately.”

U.S. troops in Syria number about 1,000, and U.S. President Donald Trump had said he wants to bring the troops home, but military officials have advocated a phased approach, which is based on political pressure on Damascus.  The Syrian Arab Army and their Russian allies are capable of fighting ISIS should they revive. 1,000 U.S. troops would not be effective militarily; however, the U.S. troops maintain their alliance with the SDF, and this keeps the income from Syrian oil wells from benefiting Damascus, and prevents the reconstruction of Syria, which is a political goal of the Trump administration, and the U.S. Congress.

The PMF, allied with Iran, were also allied with the U.S. as they both faced the common enemy: ISIS.  However, ISIS was defeated, and the past alliance has ended, and now the PMF want the U.S. forces to leave Iraq.  When Pres. Trump made his surprise visit to Iraq, he said the 5,200 U.S. troops are stationed there to ‘keep an eye on Iran’, which was a surprise to Iraqi parliament members who called for ousting the U.S. troops from Iraq entirely.

Prime Minister Adel Abdel Mehdi was pressured by the U.S. to not reopen the Qaim crossing to Syria; however, he refused to bow to pressure, as Iraq’s economic interests were paramount in his decision.  Syrian merchandise, such as clothing and textiles, and agricultural products are well known in Iraq. The Gibraltar seizure of the Iranian tanker bound for Syria highlighted the need to find a land route for oil.  PM Mahdi recently accused ‘Israel’ of having carried out attacks in Iraq on the PMF, which resulted in two Iraqi soldiers being killed, and the destruction of military bases and weapons depots. ‘Israel’ has admitted to carrying out hundreds of strikes inside Syria, which they claim were against Iranian targets.

Assem Jihad, a spokesman for the Iraqi Ministry of Oil, told Al-Monitor, “The ministry is considering the extension of an Iraqi oil pipeline through Syrian territory to the Mediterranean Sea, and is in the process of studying the economic feasibility of the project and the appropriate geographical and security conditions.”

The Nassib-Jaber border crossing between Syria and Jordan was re-opened after having been closed in 2015.  Jordan’s Ministry of Industry and Trade and the Chamber of Commerce was excited to re-establish trade with Syria, which amounted to 90% of all trade in Ramtha, Jordan before 2011, and amounted to $238 million in exports to Syria, including 250,000 tons of produce to Europe annually via Syria’s ports.  However, the Jordanian hopes were dashed when American officials came and threatened the Jordanian business community to not do business with Syria, or they would face U.S. sanctions. The U.S.-NATO war on Syria for ‘regime change’ failed, but they refuse to give up in the face of their defeat and insist on preventing Syria from an economic recovery, even though it is economically devastating to the U.S. ally Jordan.