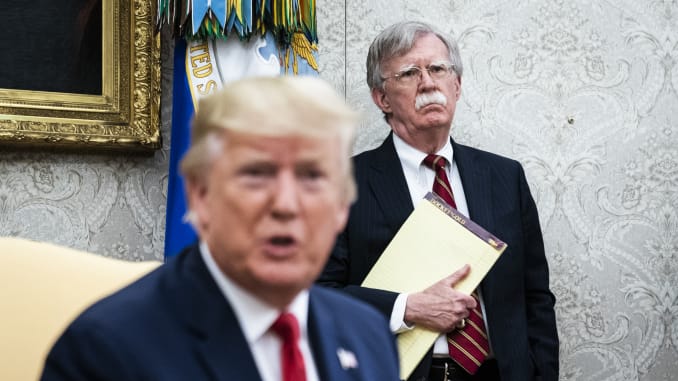 Trump is no peacenik, far from it. He’s the latest in a long line of US warrior presidents — waging endless wars of aggression, and by other means, against nonbelligerent states threatening no one.

He’s the US liar-in chief, time and again saying one thing, then going another way, long ago proving he can never be believed or trusted.

“I was against (Middle East wars). And I was against (them) very early. And we shouldn’t have been in there. And I think it is probably perhaps the worst mistake we have ever made.”

He called Afghanistan and Libya wars mistakes, after supporting them earlier.

He complained about wasting trillions of dollars, turning the Middle East into a mess, instead of using the funds spent to rebuild America.

“(W)e don’t have the money because it’s been squandered on so many (wrong) ideas,” he said.

In January, he vowed to pull US forces out of Syria. They remain, illegally occupying about 30% of the country’s northern and southern territory.

He vetoed legislation to end US involvement in Yemen. He supports increased spending for militarism, wars, weapons development to unprecedented levels, and America’s global empire of bases — used a platforms for endless wars against invented enemies.

Permanent war is longstanding US policy under both right wings of the one-party state, Trump following in the footsteps of his predecessors.

Permanent occupation of Afghanistan, Iraq, and Syria are planned. US military forces came to stay. The same goes elsewhere under US installed puppet regimes it controls.

US dark forces didn’t permit Trump’s election to get “out of these ridiculous wars,” as he falsely claimed.

They demand no change in the nation’s permanent war agenda. He lied claiming he rebuilt a “depleted” military.

With all categories included, the US spends as much or more on militarism and warmaking than all other countries combined — a machine used for mass slaughter, destruction and intimidation.

Trump lied, or perhaps doesn’t know, claiming “(w)e quickly defeated 100% of the ISIS caliphate” — a scourge the US created and supports, along with al-Qaeda, and likeminded terrorist groups, used as proxy forces in all US war theaters.

Throughout most of Obama’s war in Syria, now Trump’s, the US used Kurdish YPG fighters as a Pentagon proxy force against the nation’s sovereign independence and territorial integrity, Republicans and undemocratic Dems want eliminated.

Time and again, the US uses allies for its imperial interests, then betrays them, Syrian Kurds perhaps the latest group to learn this lesson the hard way.

The White House announced that it will neither support or be involved in Turkey’s planned cross-border offensive against Syrian Kurdish fighters.

US forces in the country are being redeployed away from the Turkish border, leaving Ankara free to wage aggression on the Kurds uncontested by the Pentagon.

Betraying them is no surprise. Abandoning allies when no longer needed, wanted, or when other objectives take precedence is longstanding US practice.

Virtually nothing Trump says or does surprises. On Monday, he tweeted:

“If Turkey does anything that I, in my great and unmatched wisdom, consider to be off limits, I will totally destroy and obliterate” its economy.

Bilateral relations have been strained for years, notably since the 2016 aborted coup attempt to topple Erdogan, US dirty hands likely behind it.

Erdogan is at odds with Washington over its support for Kurdish fighters in northern Syria. He’s upset over being treated as both a NATO ally and Eurasian adversary by the US.

While playing the Russia and US cards simultaneously, he’s increasingly shifting his allegiance East, away from the West – another body blow to Washington’s imperial agenda.

“(i)t is time to reconsider our membership in NATO…an organization that shows its hostile attitude to its member in every way,” calling its behavior “brutal and dishonorable.”

He’s furious over the Trump regime’s ban on selling F-35s to Ankara in response to his S-400 purchase. His Foreign Ministry denounced the move, saying it “shows (a) hostile (US) attitude to its (alliance) member in every way.”

Turkey’s military in NATO is second largest to US force strength. If Erdogan withdraws over strained relations with Washington, it’ll be a major blow to US regional and global aims, notably by pushing Turkey closer to Russia.