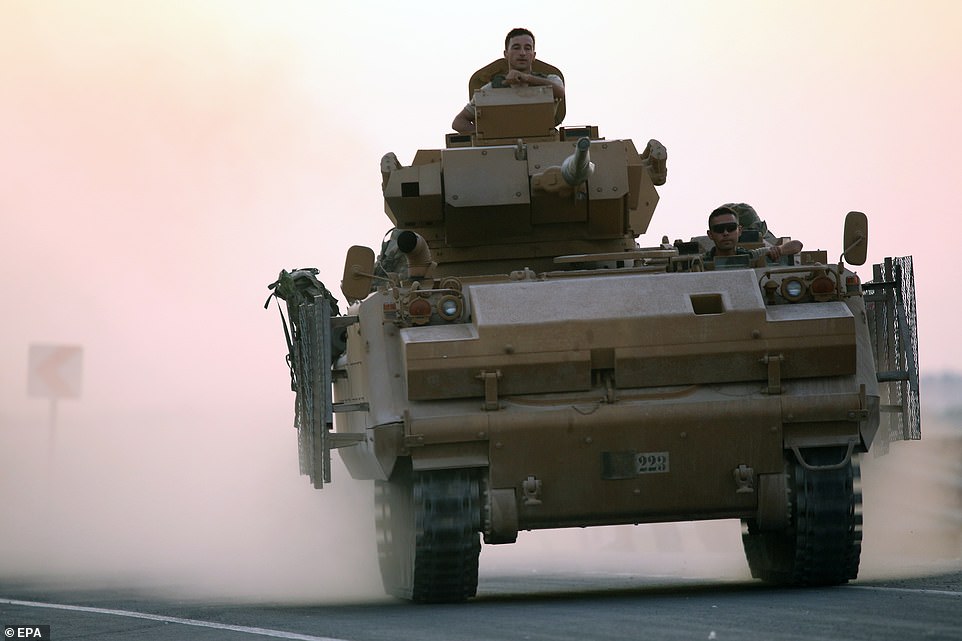 Turkish President Erdogan began a military invasion in northeastern Syria on Wednesday, named “Operation Peace Spring”.   The perceived threat to Turkey lies in the autonomous state of ‘Rojava’, also known as the Autonomous Administration of North and East Syria (NES).

In July 2016, NES Assembly co-chair Hediya Yousef stated that a federal system is the ideal form of governance for Syria.  Pres. Erdogan will not tolerate an autonomous state on his border, as this could influence and inspire Turkey’s fifteen million Kurds to fight to achieve a similar state. The Kurdistan Workers’ Party (PKK) has been responsible for the deaths of some 40,000 people in Turkey in over 30 years of terrorist acts.

The Kurds are an ethnic group living across four countries: 15 million in Turkey, about 1 million in Syria, about 6 million Iraq and about 5 million in Iran.  The Kurds in Syria represent 4% of the population, and before 2011 were scattered across the country with most in the northeastern corner which borders Turkey and Iraq.  However, in that corner which is now called ‘Rojava’, the Kurds were a minority of the pre-war residents. Syrians who are Arab Sunni Muslims are about 70% of the population, while Christians are 10%.  Ethnicity and religion are intertwined in Syria.

The capital of ‘Rojava’ is Qamishli, which was originally founded by Kurdish, Assyrian and Armenian refugees fleeing genocide in Turkey. Before 2011, Qamishli was home to Sunni Kurds, Sunni Muslims, and Christians, with a seat of both an Armenian and a Syrian Catholic archbishopric.

The beginning of the Kurdish terrorism against the Syrian Arab Republic began on September 6, 2012, when Kurdish activists reported that 21 civilians were killed in the Kurdish neighborhood of Sheikh Maqsud in Aleppo.  This was the beginning of armed Kurdish terrorists, which eventually morphed into the Syrian Democratic Forces (SDF), which has deep ties with the YPG and the PKK, which is recognized internationally as a terrorist group. The Islamic State of Iraq and Syria (ISIS) announced their headquarters in Mosul in 2014, and they occupied large areas in Iraq and Syria.  The US-led coalition aligned with the SDF in 2015 to defeat ISIS. The Kurdish militia SDF was trained and financed by the US, and they fought alongside and lost some 11,000 fighters in the successful defeat of ISIS. However, the SDF and the US were only a part of the defeat of ISIS. The largest ground force in Syria is the Syrian Arab Army (SAA), which was aided by the Russian air force arriving in October 2015. The Obama administration appeared to be soft on ISIS, as they allowed huge caravans of stolen oil to pass through to Turkey, where the oil was sold for the benefit of ISIS.  That stopped abruptly when the Russian air force arrived and began bombing the caravans and preventing the funding of ISIS. The defeat of ISIS in Iraq and Syria was a group effort by the Iraqi Army and militias, as well as the SAA, Russians, US Army, and the SDF.

During the various battles which began in 2012, the Kurdish militias systematically invaded and occupied more and more land in northeastern Syria.  The media refers to the ‘Kurdish land’ that the SDF are fighting for, and are now facing expulsion from at the hands of the Turkish Army. However, those ‘lands’ are not all theirs.  The majority of the land, farms, houses, and businesses legally belong to people who are not ethnically Kurdish, which is evidenced by the expulsion of the original inhabitants. Many of the non-Kurds were killed, and their property occupied by the Kurds.  Some were expelled and are now living in safe areas in Syria under government control, such as Hama, Aleppo, and Latakia. These are internally displaced Syrians may be cheering the Turkish Army while seeing scenes of invasion on TV. Revenge may feel good, but it is questionable whether they will be able to return to their homes and land, because the Erdogan plan does not include a restoration of property rights to Syrians, but instead it has planned to remove all Kurds and replace them with the 3.6 million Syrian refugees living in Turkey.  Afrin was taken by Turkish forces in January 2018, with the resulting 140,000 mostly Kurds being driven from their homes.

Omar Ossi, a Syrian Kurdish lawmaker, urged the SDF to open negotiations with the Syrian government to avert a Turkish military operation in northeastern Syria.  For years Ossi has cautioned the SDF and their political wing NES to not count on the loyalty of the US, but instead remember they are Syrian citizens first, before any religious or ethnic identity.  Now that the actual invasion and attacks have begun, resulting in loss of life, it may be the only hope to survive for the residents of northeastern Syria. The Russians have said they are willing to be a mediator in the process between Qamishli and Damascus.

this article is original published at Mideastdiscourse.com