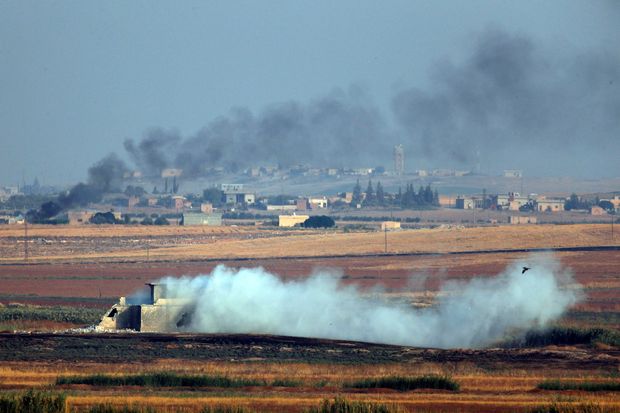 Heavy fighting has been reported as US-backed Syrian Kurdish militants hold off a Turkish incursion into northeastern Syria, regaining control of several villages lost during the fighting.

Overnight counter-attacks by Kurdish forces led to the retaking of two of the 11 villages, which had previously fallen to Turkish forces, according to reports.

“There is heavy fighting between the Syrian Democratic Forces (SDF) and the Turks on different fronts, mostly from Tal Abyad to Ras al-Ain,” the so-called Syria Observatory for Human Rights reported on Friday.

Kurdish media also reported that Tal Abyad and Ras al-Ain had been hit worst by the fighting.

The Observatory said the SDF forces have been using “tunnels, trenches and berms” in their defense operations while Turkish forces have relied on air strikes, heavy artillery and rocket fire.

Since the offset of the Turkish invasion on Wednesday, at least 10 civilians along with least 29 Kurdish fighters have been killed according to the Observatory.

Another six fighters belonging to armed groups led by Turkey have also been reported killed.

The Turkish Defense Ministry confirmed on Friday that it had lost one soldier and that another three had been injured, marking Turkey’s first confirmed casualties since it began the incursion.

The US granted Turkey the greenlight to attack the SDF, led by the People’s Protection Units (YPG), earlier this week by withdrawing its troops from Syria’s Kurdish-controlled border region with Turkey.

The move was seen by Kurdish forces as a “stab in the back” from their supposed ally in Washington.

Turkey regards the YPG as a terrorist organization and an extension of the PKK, which has been fighting for an autonomous region inside Turkey since 1984.

Anakara consequently seeks to create a “safe zone” stretching about 120 kilometers south of the Turkish border and 30 kilometers deep into the Kurdish controlled region in northern Syria.

Thousands of Syrian civilians have left their homes to flee the Turkish invasion of northern Syria amid mounting fears of a developing humanitarian crisis.

The United Nation’s Office for the Coordination of Humanitarian Affairs announced on Thursday that an estimated 70,000 people have been displaced since Ankara launched the incursion earlier this week.

Civilians were reported to be fleeing the affected areas by vehicle and on foot, carrying their belongings on their backs as Turkish forces unleashed airstrikes and intense heavy artillery fire in the region to create a “militant-free safe zone”.

“We’re heading to the countryside because we’re scared of renewed bombing and intensified clashes,” said Rizan Mohammad, a Syrian civilian who fled Syria’s northeastern city of Qamishli on the border with Turkey with his family.

Also on Thursday, fourteen humanitarian organizations, including Doctors of the World, Oxfam and the Norwegian Refugee Council, issued a statement warning of the potential humanitarian costs of the conflict.

“An estimated 450,000 people live within five kilometers of the Syria-Turkey border and are at risk if all sides do not exercise maximum restraint and prioritize the protection of civilians,” the joint statement said.

US-backed Kurdish militants have also warned that the Turkish incursion may enable detainees belonging to the Daesh Takfiri terrorist group to escape as they divert resources to face off against Turkey.

About 12,000 men linked to Daesh are held in seven detention centers across northeast Syria, according to the Kurds.

On Friday, French State Secretary for European Affairs Amelie de Montchalin said that sanctions against Turkey will “be on the table” during the European Union’s summit next week.

“We will not remain powerless when faced with a situation that is shocking for civilians, the free Syrian forces and the stability of the region,” she said.

The remark comes as the Turkish operation has drawn world-wide condemnation, including from regional states such as Iran, Iraq, Lebanon, Egypt, Bahrain, the United Arab Emirates and Saudi Arabia.

The military operation has above all been vehemently rejected by Damascus, which views Turkish presence on its territory as an infringement of its national sovereignty.

Issuing a statement on Thursday, the Iranian Foreign Ministry called for “the immediate cessation of attacks and the withdrawal of Turkish troops from Syria.”

Speaking a day earlier, Iranian President Hassan Rouhani also said that Tehran acknowledged Ankara’s “legitimate” security concerns, but only “the presence of the Syrian military” and withdrawal of US forces from the region could address those concerns.

On Thursday, Israeli Prime Minister Benjamin Netanyahu condemned the Turkish operation and warned “against the ethnic cleansing of the Kurds by Turkey and its proxies,” adding that “Israel is prepared to extend humanitarian assistance to the gallant Kurdish people.”

Despite the US’ withdrawal allowing Turkey to carry out its operation against the Kurds, Washington, along with Tel Aviv, have long sought to prop up relations with Kurdish groups in a bid to empower Kurdish separatist movements and weaken regional governments.

Tel Aviv consequently stands as the lone staunch supporter of Kurdish independence in the region.

Earlier this year, the Arabic-language al-Akhbar newspaper reported that Israeli officers have made regular visits to the Kurdish-controlled region in northern Syria.

The report, which echoed a similar report regarding Iraqi Kurdistan, added that the Kurds were selling oil to the Israeli regime.