Home Economy US, China Have Reached Partial Agreements That Could Pave Way to Truce in Ongoing Trade War – Report 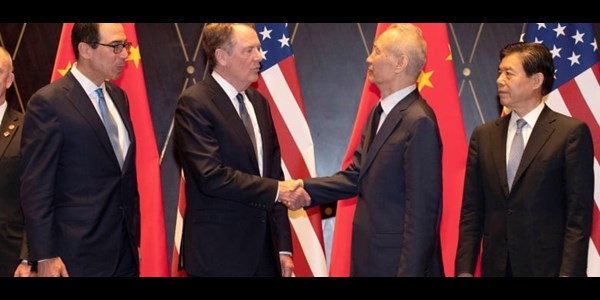 The United States and China managed to reach a partial agreement which might serve as groundwork for a “broader deal” between the two countries.

Beijing and Washington have finally reached an agreement that would lead to a truce in the trade war between the two countries, Bloomberg reports.

The agreement, made on 11 October, is also expected to lay the groundwork for a “broader deal” which Chinese President Xi Jinping and his US counterpart Donald Trump might sign later this year, the media outlet adds citing people familiar with the matter.

As per the new deal, China would “agree to some agricultural concessions”, with the United States providing “some tariff relief” in response.

Earlier, Trump tweeted that “good things are happening at China Trade Talk Meeting”, adding that everyone “would like to see something significant happen” as he prepares to meat with Xi.

​The US president also quipped about one of the positive aspects of the deal being not having to go through the congressional approval process, and that he will sign the agreement himself once it’s fully negotiated.

The trade row between the world’s two largest economies erupted in June 2018 when the Trump administration imposed the first round of trade duties on China, prompting Beijing to respond in kind. Since then, the sides have exchanged several rounds of tit-for-tat duty increases and are continue to be engaged in talks to settle their disagreements.