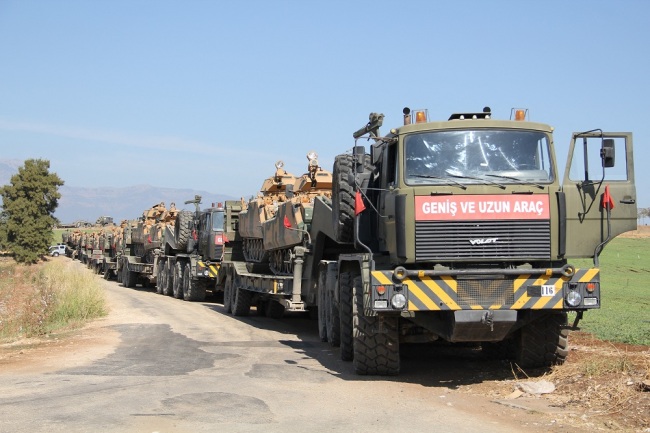 Turkey’s Defense Ministry claims to have killed 174 YPG/PKK terrorists. However, this operation is much larger than expected at 300km wide and 50 kilometers deep according to some sources, and many major cities have been targeted, resulting in numerous innocent Syrian civilians’ deaths in residential areas.

Last Sunday night, The White House issued a statement, which some believe gave Turkey the green light to go through with its incursion against Kurdish militias on its border. In the White House statement, it states that President Donald J. Trump and President Recep Tayyip Erdogan spoke on the phone and that US troops would not support or be involved in their military operation. The statement claims that Washington defeated ISIS and is no longer needed there. It also mentions that the United States pressured his European allies to take back their terrorists because and that Turkey would now be responsible for them.

Bipartisan disappointment and disapproval quickly followed the White House statement. Some were saying that Washington gave Turkey the green light to proceed with their planned military operation. There is some truth to that, Turkey wanted to make sure that US troops had vacated their border area before proceeding.

Following Ankara’s announcement on Saturday of an impending military operation, the SDF had said that they would respond to Turkey’s military operation with an all-out war and defend “their” land. However, thousands of Kurds fled their homes a few days after, some without a specific destination in sight.

A mass exodus most likely due to their lack of faith in their militias being able to properly protect them. Some said they were headed to US military posts to seek protection. Last year Operation Olive Branch in Afrin proved that Kurdish militias cannot fend off a Turkish assault without US troop support.

The fifty US troops that were stationed near or around Turkey’s border were given orders to evacuate further south and to not get involved in defending or helping the US-backed Kurdish SDF/YPG.  Turkey’s President Recep Tayyip Erdogan made an announcement on Saturday that he would take measures into his own hands and create a safe-zone and refugee “peace corridor” after not being satisfied with the progress that was made with the United States in their creation.

A day after the airstrikes commenced, on Thursday, a land operation began using the recently merged terrorist factions numbering roughly 60,000 that consist of Free Syrian Army fighters. Many international leaders have spoken up about their opposition to these military operations and have asked the Turkish government to cease them, including the Syrian government but Turkey is pushing through.

There’s been mention that Russia is in the process of organizing reconciliation talks between Turkey and Syria, which would be the first of their kind since diplomatic relations were severed in 2012.

On Thursday, the Syrian government ruled out talks with the Kurdish militias based on their betrayal and for committing crimes against the Syrian state and people. President Assad’s administration has not only given them many prior chances to repent and realign with the Syrian army but explained that ultimately, they will be discarded by the Trump administration and it’s in their best interest to cut those ties and return to peace and stability.

Unfortunately, Kurdish militias found working as agents pushing a foreign agenda for the United States and Israel more appealing and profitable, even at the cost of their own dignity. It was a known fact that once they were betrayed for the umpteenth time by the United States that they would be running back to renegotiate but that door of opportunity might be closing soon, if it hasn’t already.

According to a Norwegian official, Norway is suspending the delivery of arms to Turkey after its invasion of northeastern Syria.  World leaders from Lebanon, Iraq, Yemen, Egypt, Greece, Cyprus, Italy, Saudi Arabia, Israel, Iran, Russia, Australia, Japan etc. have spoken in condemnation of Turkey’s military operation stating it will undermine stability in the region and could provide the opportunity for a Daesh resurgence.

Turkey’s Erdogan has threatened to open the door for 3.6 million Syrian refugees if European leaders continue to call his cross-border military operation an occupation.

President Trump has said Washington is not abandoning the Kurds, but they have been fighting with Turkey for “hundreds of years” and need to fight their own battles going forward. He also mentioned that ISIS will now be the responsibility of Kurdish and Turkish forces which is problematic, both sides have been known to recruit and take in extremists.  It’s been mentioned that 12,000 ISIS fighters in 7 prisons are now under Kurdish control. Some are worried that they might be set free or escape. President Trump believes that if they did escape, they would return to their home countries in Europe.

Pulling out all illegal US, British and other foreign uninvited troops in the Middle East, is an excellent idea. President Trump said that the worst mistake the United States made was going to war in the Middle East based on false pretexts and lies. He will however face an uphill battle with the Pentagon and bipartisan political pariahs in Washington and Israel, which are all strong deterrents to his campaign promise.