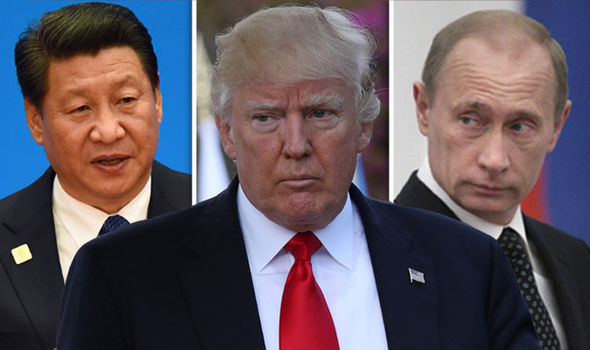 For many years, the west has experienced an unfortunate drought of genuinely nationalist leaders.

Where the concept of national sovereignty had once been considered a sacred component of a political leader’s mandate, decades of technocratic governance from above, monetarism and consumerism from below and asymmetric wars abroad has caused the word itself to be dragged through the mud of insanity.

This tendency became a cartoonish joke when a poster-boy for neo-liberalism by the name of Justin Trudeau celebrated his election victory in 2015 by proclaiming that he was the leader of “the world’s first post-national state”. Of course, Justin was then responding to the “authoritarian nationalists” apparently disrupting the world order by “annexing” Crimea in the case of Putin’s Russia and imposing “unwanted” development onto poor countries as was the case with Xi Jinping’s China. The U.S elections were just around the corner, and it was obvious that Hillary Clinton couldn’t possibly lose.

Today’s 2019 world looks very different from the Obama-stained one that Justin lived in when he uttered those ridiculous words.

Since 2015, Russia has succeeded in completely turning the tide of chaos in Syria and the new Ukrainian government has even responded positively to reviving the “Steinmeier Formula” granting a special administrative status to East Ukraine. China has succeeded in over-thowing the neocolonial agenda of the IMF and has brought an alternative development model with the Belt and Road that now has 130 countries officially on board. The Trans-Pacific Partnership scam which was considered a done deal in 2015 has entirely collapsed, as has the momentum to build a military encirclement of China using the “nuclear threat of North Korea”.

Trump’s restoration of America’s traditionally nationalist roots tied to his commitment to defuse the multitude of America’s foreign military enmeshments as witnessed in his recent push to get out of “ridiculous endless wars” in Syria and Iraq, and constant appeals to “get along with Russia” have begun re-infusing the word “nationalism” with the dignity it lost long ago. Trump’s September 24 UN General Assembly speech was a refreshing defense of nationalism which boldly stated that “the future doesn’t belong to globalists, the future belongs to patriots” and was a breath of fresh air for all sane onlookers.

Trump Must be Destroyed

Of course, sanity cannot be tolerated in the mind of an indoctrinated globalist.

The entire campaign to destroy Donald Trump going back to 2015 used every desperate lie imaginable in a vain effort to restore the dream of a post-nation state world order which its adherents refuse to believe has collapsed entirely. This includes Hillary’s attack on Trump for calling for peace in Syria on October 7, to the Liberal media establishment becoming pro-Bolton literally the moment the neo con hawk was fired for pushing a “Libya-model” on North Korea. Here the Washington Post led the pack exclaiming “John Bolton has finally spoken, and he put up a big warning sign about Trump and North Korea,” then asked “whether he might be a key witness in the Democrats’ impeachment inquiry over Ukraine.”

The Coup Called Out

Not only has Trump gone on the offensive calling this process the coup d’état which it is, but has also launched a vast investigation of the real perpetrators of Russia-Gate both within America and beyond, led by William Barr and teams of investigators who just returned from Italy after a 2nd meeting with Italian intelligence chiefs over the role of MI-6 connected Joseph Mifsud- a key operative behind Russia-Gate.

While some people have chosen to treat Trump as a paranoid conspiracy theorist, President Putin demonstrated his understanding of this coup by calling out the deep state forces managing Ukraine who are attempting to destroy a potential Russia-USA alliance when he said: “we see what is going on in the United States: [some forces] are using any pretext to attack President Trump. Now that is Ukraine and all the wranglings linked to it- I mean the relations with Ukraine and President Zelensky… that once again confirms we had nothing to do with US political games from the very beginning. They have just looked for pretexts to attack the elected President”.

A leading voice of the impeachment camp since 2017, Congressman Al Green (D-TX) showcased where the real anti-democratic sentiments of the deep state lie when he said on NBC “if we don’t impeach this President, he will get re-elected”.

Why do Globalists fear Nationalism?

Most of the liberal establishment zombies today who champion a post-nation state world order honestly don’t have a clue where their convictions come from. They don’t know why they equate nationalism with authoritarian tyranny. Of course, when one considers that ALL popular revisionist history books tend to assert that the Fascism of Mussolini and Hitler arose out of nationalism (not Anglo-American financing) it shouldn’t come as a surprise. Nationalism, we are told by such influential eugenics-loving globalist scholars as Lord Bertrand Russell, is pure selfish egotism, which if left unchecked, will only consume all of its resources until scarcity and overpopulation demand it rapaciously dominate and subdue its neighbours until the world succumbs to the will of a global tyrant. Russelites believe that nationalism is inherently incompatible with a peaceful world because humans are just as selfish and bigoted as… well, Bertrand Russell! In his Why Men Fight (1916), Russell said:

“If men had any strong sense of a community of nations, nationalism would serve to define the boundaries of the various nations. But because men only feel community within their own nation, nothing but force is able to make them respect the rights of other nations, even when they are asserting exactly similar rights on their own behalf.”

A lifelong advocate of World Government, depopulation (and occasional advocate of unilateral nuclear war against Russia), Bertrand Russell always made the case that the primary tool to condition our society away from nationalism must be education and mass psychology. In his 1951 Impact of Science on Society, this father of modern liberalism said:

“I think the subject which will be of most importance polit­ically is mass psychology… Its importance has been enormously increased by the growth of modern methods of propaganda. Of these the most influential is what is called “education”… The social psychologists of the future will have a number of classes of school children on whom they will try different methods of producing an unshakable conviction that snow is black. Various results will soon be arrived at. First, that the influence of home is obstructive. Second, that not much can be done unless indoctrination begins before the age of ten. Third, that verses set to music and repeatedly intoned are very effective. Fourth, that the opinion that snow is white must be held to show a morbid taste for eccentricity. But I anticipate. It is for future scientists to make these maxims precise and discover exactly how much it costs per head to make children believe that snow is black, and how much less it would cost to make them believe it is dark gray. Although this science will be diligently studied, it will be rigidly confined to the governing class. The populace will not be allowed to know how its convictions were generated. When the technique has been perfected, every government that has been in charge of education for a generation will be able to control its subjects securely without the need of armies or policemen.”

In his Future of Science (1924), Russell drew out how a utopian World Government could arise out of the bipolarity of a schismed society:

“Before very long the technical conditions will exist from organizing the whole world as one producing and consuming unit. If when that time comes, two rival groups contend for mastery, the victor may be able to introduce that single worldwide organization that is needed to prevent the mutual extermination of civilized nations… There would be at first economic and political tyranny of the victors, a dread of renewed upheavals, and therefore a drastic suppression of liberty. But if the first half-dozen revolts were successfully repressed, the vanquished would give up hope, and accept the subordination assigned to them by the victor in the great world-trust… Life at first might be unpleasant, but it at least would be possible, which would be enough to recommend the system after a long period of warfare.”

The decades following WWII saw the manufactured creation of a Cold War, nuclear terror, a multitude of assassinations and the sabotage of the US-Russia-China alliance which FDR had envisioned as the foundation for an anti-colonial post-war community of nation states.

Russellites such as Tony Blair and Sir Henry Kissinger celebrated the advent of Russell’s New World Order by cheering on the “Post-Westphalian era” as the Soviet Union collapsed and despite a few voices of sanity in the west, truth became falsehood, nationalism became tyranny and snow became, for all intents and purposes- black.

Today’s nationalist revival is not merely a rejection of Russell’s program for world government in favor of an alternative power alliance. That is far too simplistic.

This revival is happening essentially because Russell’s entire view of nature and humanity are wrong. Unless one wishes to just kill everybody then “world peace” and “world stasis” are totally incompatible concepts as devoid of moral reason and incapable of creative change as are the minds of Russell and his ideological heirs.

Fortunately, humanity doesn’t appear to be the selfish scum which misanthropic geopoliticians presume and the imagined post-nation state utopia lusted after by the likes of Russell are impossible goals because the WHOLE IS NOT THE SUM OF ITS PARTS. As the greatest minds such as Plato, Augustine, Dante, Cusa, and Leibniz all recognized in their own times, humanity is not a closed system of finite potential to be controlled by social engineering overseers. Evidence rather points to the more optimistic likelihood that we are ordained with creative reason and free will, which gives us access to an infinite array of new discoveries both on the earth and beyond IF our political-economic systems encourage it.

Foreign Minister Lavrov echoed that view in his own way on October 3 when he said that the west “must stop playing zero-sum geopolitical games, stop dividing regions into spheres of influence and ultimately begin being guided by the generally recognized rules of interstate relations that are committed to paper in the United Nations Charter.”

Calling for the nations of the world to join in the developments of the Belt and Road Initiative, Xi Jinping slapped Russell’s ghost brilliantly saying: “The Cold War mentality and zero-sum game are increasingly obsolete. Only by adhering to peaceful development and working together can we truly achieve win-win results.”

Standing alongside Putin at the Valdai discussion forum, Philippine President Duterte stated this principle of a harmony of all nations with the whole of which we are parts when he said “The Philippine people need to be enriched by other cultures and intellectual traditions… in order to embrace our shared destiny”.

So when President Trump says “the future does not belong to globalists, the future belongs to patriots”, and when a global sociopathic system goes into hyper-drive to destroy that President, you should take it very seriously.