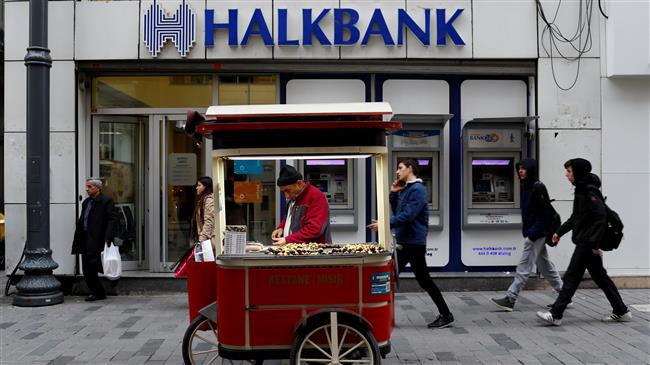 Turkey’s second largest state bank Halkbank has slammed the United States for using sanctions related to Iran over a current standoff with Turkey on the situation in Syria.

Halkbank said on Wednesday that new charges filed in a US court against the bank claiming the lender had violated Iran sanctions was an attempt to further pressure Turkey over its current military operation in Syria.

“These were filed as part of the sanctions introduced against our country by the US government in response to Operation Peace Spring,” said the bank of the military operation which was launched early last week in an alleged bid to secure borders with Syria.

The indictment filed in a district court in New York on Tuesday alleges that Halkbank used a web of front companies to allow Iran to spend revenues from its gas and oil sales on international markets between 2012 and 2016.

It charged the bank with six counts of fraud, money laundering, and sanctions offenses.

Halkbank said the decision to indict the bank was an “unprecedented legal overreach” because the lender has no branches or employees in the United States and falls outside of the US Justice Department’s jurisdiction.

“… now they have taken an unlawful, ugly step with the southern New York prosecutors opening it again,” Erdogan told reporters in Ankara on Wednesday, adding, “We will see the decision they will take, and we will (respond) accordingly.”

Turkey began its offensive into northeast Syria right after the US ended its years-long illegal military presence in the Arab country.

Washington has pressed Ankara to end the operation or face massive economic punishment.

Damascus Iran middle_east New_York Syria TEHRAN Trump USA Washington
Previous ArticleAssad: Syria will respond through all legitimate means to Turkish aggression
Next Article Winners and Losers in the Turkish Attack on Syria. Russia is the Most Successful Player