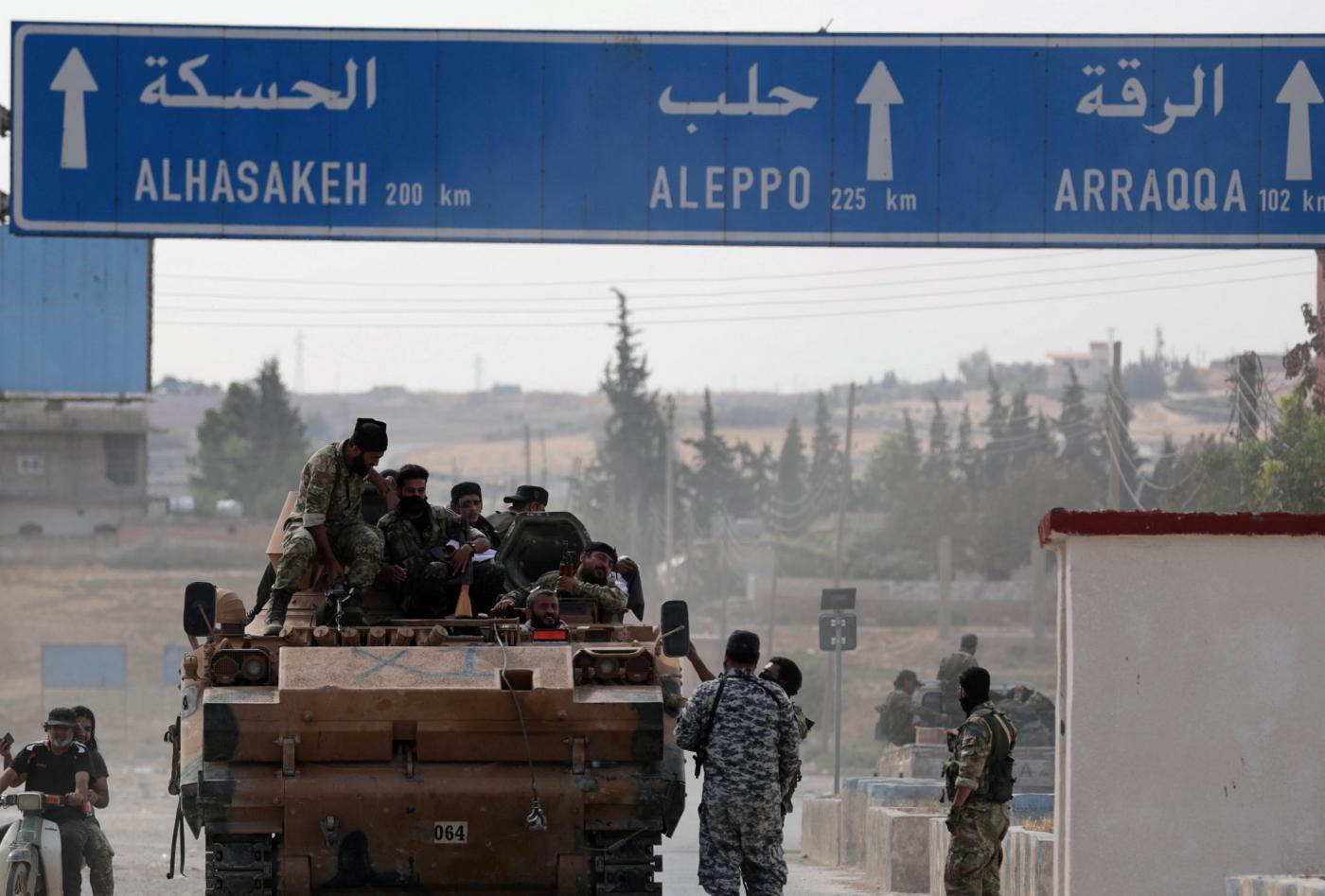 President Donald Trump has given the orders to begin a “deliberate withdrawal” of his troops and end the occupation of north-east Syria (NES). This is accelerating the race between the Turkish and the Syrian forces to control NES.

Turkey is in a rush to establish its 30-35km wide safe zone on the borders with Syria in the US-occupied north-east territory, currently under the control of the Syrian Kurdish separatists. Turkish President Recep Tayyip Erdogan is aware of the pressure his US ally, President Donald Trump is under for approving this operation, an operation which has made Trump even more unpopular among the US and western élites.

Trump took it upon himself to unilaterally take control of an area in Syria bigger than Switzerland. Uninvited by the central government, he had established over a dozen military and air bases in the country and kept them there notwithstanding the defeat of ISIS. Trump has now agreed to pull back some US troops, allowing Turkey and its Syrian proxies to move into this part of Syrian territory. The US President and his Russian counterpart Vladimir Putin blocked an EU-drafted resolution condemning the Turkish offensive. Now, the winners in this operation are much more numerous than the losers and it would be a mistake to suppose that only Turkey is gaining from this operation. All winners have their own objectives and perspectives to assess how they can benefit from the Turkish invasion.

By deciding to pull out 1,000 men from NES, Trump is reshuffling the cards, moving the burden away from his administration and dropping it into the hands of Russia, Turkey and Syria (and their allies). There is a serious need for Russia to move fast and bring concerned players around the table to organise a situation that could turn more chaotic and lead to even more confrontation.

The biggest losers are the Kurds: the People’s Protection Units (YPG), the armed wing of the Syrian Kurdish Democratic Union Party (PYD), the Syrian branch of the Kurdistan Workers’ Party (PKK)- which were classified as terrorist organisations by the US (since 1997), by the European Union (since 2002), and by NATO, Turkey, and some other countries.

The Kurds in the Levant

The Kurds are now in south-east Turkey, north-east Syria, the north of Iraq, north-west Iran, and south-west Armenia. With an estimated population of 30 million, they may be the largest stateless minority in the world. More than half of the Kurds live in Turkey; it is thus less than accurate to call the Turkish attack on Syrian Kurds “ethnic cleansing”.

The 1923 Lausanne Peace treaty with the Republic of Turkey denied the Kurds the realisation of their dream for an independent “Kurdistan” state of their own. The Kurds staged many rebellions but all failed to achieve their aspirations for a state. These include the Sheikh Said rebellion (1925), the Ararat (1930) revolution led by the Armenian Ziylan Bey, one of the most famous rebels of the mountains (the Iraqi Mustafa Barzani crossed the borders to join the rebellion), and the Sayid Riza 1937-1938 Kurdish-Alevi Dersim genocide (known today as Tenceli). The latter operation was carried out under the orders of Turkish President Mustafa Kemal Atatürk, and is recognised by President Erdogan as a “massacre”.

In 1974, Abdullah Ocalan formed a Maoist proletarian movement, the Kurdistan Workers Party (PKK) and focussed on Turkish targets within the country. Thus far at least 40,000 people have been killed in this conflict without the Kurds achieving their goal of a state. Ocalan and some 3,000 PKK militants are festering in jail. The US, the EU and many other countries categorize the PKK as a terrorist group. “The PKK is on the terror list of the EU and delisting it is not on the cards,” said EU foreign policy chief Federica Mogherini last March.

When the war in Syria began in 2011, the Syrian Kurds were neutral but provided many besieged Syrian cities with much-needed supplies. But everything changed on September 2014 when the “Islamic State” (IS, ISIS, ISIL or Daesh) attacked the Kurdish town of Ayn al-Arab, known to the Kurds as Kobane.

Although Turkey refused (in order to avoid a domestic uprising) to allow Turkish Kurds to cross the borders to help their Syrian brothers, it opened the borders for Iraqi Kurdish Peshmerga to walk in just when the city was about to fall. The Peshmerga had the task of providing laser designators to guide US jets against ISIS targets. The town was destroyed but ISIS failed to occupy it and withdrew in January 2015.

In October 2015 the US-led coalition formed, trained and armed the so-called Syrian Democratic Forces (SDF) under Kurdish command and alongside local Arab militias. The Kurds hoped their dream would finally materialise since the prospect of dividing Iraq and Syria now seemed realistic. A Kurdish state seemed attainable, and the name of “Rojava” (Rojavayê Kurdistanê‎), one of the four parts of Greater Kurdistan, was chosen. This territory extends from the city of Afrin in the north-west to al-Hasaka in the north-east.

In August 2016, Turkey inserted its own troops into Syria with the help of Syrian proxies and captured the border town of Jarablus. This disturbed the Kurds’ plans. Almost two years later, Turkey conquered the Kurdish city of Afrin, curtailing the map of Rojava and displacing tens of thousands of Kurds.

The Kurds preferred to hand Afrin to Turkey rather than allow the Syrian army to defend the city. Intensive negotiations were held between Kurdish leaders and the Syrian government in Damascus, the Russian military base of Hmaymeem, and other locations. The Kurds refused to hand over the billions of dollars they had accumulated from Syrian agriculture and refused to join Syria’s National Defence Forces. They wanted both full autonomy and at the same time, they wanted the Syrian Army to serve as their border guards. They preferred to fight and lose the battle rather than handing Syrian territory back to Syrian government control. The Kurds opted for Turkish occupation. This has proved to be their first major mistake.

In September 2015, when Russia was persuaded to move its air force into Syria, coordination with the US was necessary to avoid clashes. Any area east of the Euphrates River was considered subject to US operations and control. The west of the river was controlled by Russian forces. After defeating ISIS, the Syrian army tried, with its allies, to cross the Euphrates in order to eliminate ISIS from the oil and gas-rich wells north of Deir-ezzour before the arrival of US-backed forces. The Syrian troops were decimated by US forces. Over 200 men were killed, showing that the US was not ready to give up what it considered its “zone of influence,” with its considerable accompanying material advantages.

Clearly, the US had the intention of staying and occupying an area that represents slightly less than the third of Syria, an area particularly rich in agriculture and in energy resources.

Then Kurdish Iraqi leader Masoud Barzani’s hasty and failed attempt to declare his independent state in Iraq finally put an end to the Kurdish dream of uniting Rojava with Iraqi Kurdistan.

With the arrival of Donald Trump, the newly appointed President came a promise to bring the US forces home from the Middle East. Trump described north-east Syria as “a land of death and sand ”. He intended to pull out unless the area could bring him revenues. Arab states who were heavily involved in the war in Syria, financing jihadists and rebels, had lost their appetite to supply monies and arms. They were no longer ready to pay Trump for keeping his troops there.

Trump stated that the Syrian Kurds “were not great fighters” and needed his jets to clear the way before attacking ISIS. Thus he minimised their role and their losses in defeating ISIS in the capital of the “Caliphate” in Raqqah.

The Kurds never imagined the US would betray them, despite their previous experience in 1975. That was their second big mistake. Kurdish military leaders tried, to no avail, to convince Kurdish political leaders to open a serious dialogue with Damascus. But in fact the Kurds suspended negotiations and once again seemed to prefer facing a Turkish attack rather than working with the Syrian government. They put their hopes in the support of the international community and the mainstream media. The media and public personalities have indeed offered the Kurds abundant verbal support. But that will certainly not be enough to stop the Turkish attack that is now advancing rapidly in the designated area.

Trump looks on the Kurds as mercenaries he has bought and paid for. Since their services are no longer required, he is now ready to withdraw US forces to win favour with Turkey. The Kurds are expendable now that their manpower is not needed by Trump.

The Kurds, however, insisted for years on acting as human shields for Trump’s soldiers in al-Hasaka and Qamishli. And they believe that social media together with a media campaign can reverse Trump’s decision. But they are now left with no allies on the ground, and not even the mountains will protect them. Their wrong choices – in surrendering territory that did not belong to them- have made them today’s biggest losers. The US short notice announcement of a sudden withdrawal gave a cold shower to the Kurds who have now asked Damascus to move in to protect them from the Turkish advance. It was certainly high time to wake up to what is, at this stage, the only available option.