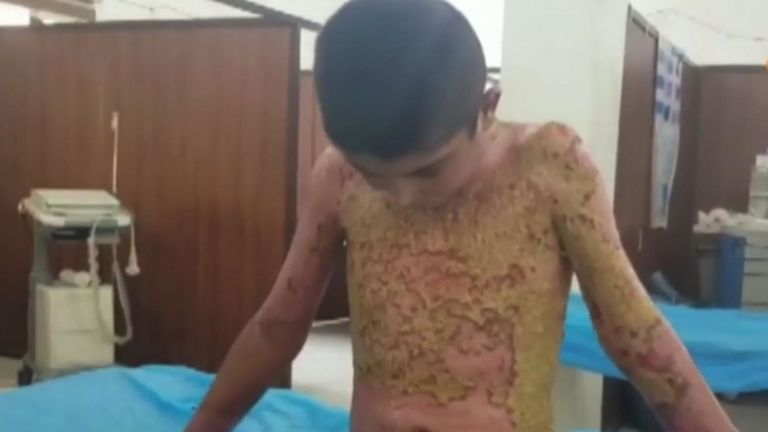 Hasaka Hospital in northeast Syria reported treating cases of chemical attacks on civilians, including children on Wednesday.  The Syrian Arab News Agency (SANA) reported the event after gathering information from the hospital, which is in an area that has a Kurdish, and Syrian government presence.  Photos emerged of children with obvious burns to the skin.  White Phosphorus is a chemical used in military actions to illuminate a battle zone at night.  However, it is a banned chemical weapon if used against civilians, as it causes severe burns.

Have chemical attacks in Syria been used before, and who benefitted?

Pres. Obama stated that the use of chemical weapons in Syria would be a ‘red line’ not to be crossed, or those responsible would face US military intervention.  The ‘Free Syrian Army’ (FSA) attacking the Syrian civilians and the Syrian Arab Army (SAA) took the ‘red-line’ statement to be a ‘green-light’ for them.  They effectively used chemical attacks multiple times in Syria, directed against Syrian civilians.  The FSA were Sunni Muslims, killing Sunni Muslims. This is the hallmark of Muslim Brotherhood ideology, which is a political ideology and is not a sect or religion-based.  The Muslim Brotherhood claims that killing fellow Muslims is allowed because the end goal is more important than innocent lives.

An early gas attack was in Khan al Assal, west of Aleppo.  The village population did not support the ‘revolution’ to create an Islamic State and had a small contingent of SAA stationed to fend off terrorist attacks.  The FSA mounted chlorine to their missiles and attacked the village, resulting in deaths and injuries reported live on Syrian TV coverage at the hospital.  Later, TV coverage at the village showed dead livestock and citizens.  Previous to the attack, the FSA had posted videos online showing chlorine containers from a Turkish source, as they practiced gassing rabbits.  The Syrian government requested the UN inspectors to come to the village, but it would be almost a year before they would arrive in Syria, and just as they were unpacking their bags in Damascus, the famous sarin gas attack was staged by the terrorists in East Ghouta.  That video went viral and was shown repeatedly globally for days.  Two deputies from the CHP party in Turkey claimed that Turkey was directly involved and that sarin was sent to Syria from Turkey via several businessmen.

The ultimate goal for the many chemical attacks carried out by the terrorists was to illicit a military invasion of Syria by the US and NATO.

Who are the ground troops used by Turkey currently in northeast Syria?

Pres. Erdogan would never risk sending dead Turkish soldiers back to their parents from fighting in Syria.  The Turkish population is tired of the war in Syria and wants no part in it.  The Turkish economy is in ruins, the Turkish lira has lost value, and the people want an end to military adventures in a foreign country.  They have had to bear the burden of over 3 million Syrian refugees, who do not speak their language and are from a very different culture.  Erdogan instructed his military leaders to use the assets on hand for ground troops: thousands of FSA, followers of Radical Islam, who failed at their ‘Islamic Revolution’ in Syria, inspired by their dedication to the Muslim Brotherhood, and took refuge in Turkey.  Erdogan and his AKP party adhere to the Muslim Brotherhood political ideology.  During the Syrian conflict, Turkey was an integral part of the Obama-NATO attack on Syria for ‘regime change’.  However, when Trump came into office he cut the funding and began a plan to get the US out of Syria, which progressed to his total withdrawal from northeast Syria.

This paved the way for Erdogan’s ’Operation Peace Spring’, which was an invasion to eradicate the Kurdish militia in northeast Syria, who Turkey equates with the PKK, who is an internationally recognized terrorist group, responsible for over 40,000 deaths in Turkey spanning 30 years.

The ‘Northern Storm Brigade’ first came to international notoriety when its leader met personally with the US Republican Senator John McCain in northern Syria in May 2013.   The photos that McCain’s office posted on the internet went viral as several of the Syrians he posed with were recognized by Lebanese citizens as having been kidnappers.  Much later, when the photos and videos of Abu Bakr al-Baghdadi, who claimed to be the Caliph of the ‘Islamic State of Iraq and Syria’ (ISIS), were posted online it was noticed that the leader of the ‘Northern Storm Brigade’ with Sen. John McCain seemed to be identical.

Obama sold the American public on a story of the FSA as freedom fighters and secular Syrians who were fighting in tennis shoes for democracy.  That image lasted only until they recruited Al Qaeda to take over the ‘regime change’ program they had started for Obama and NATO.  Many of the surviving FSA are now living in USA and Europe, and could be passing on their extensive knowledge in bomb-making to young radicals; however, we know many of the surviving FSA are living in Turkey, and are well paid for their mercenary services, including the current invasion into northeast Syria against the Kurds.