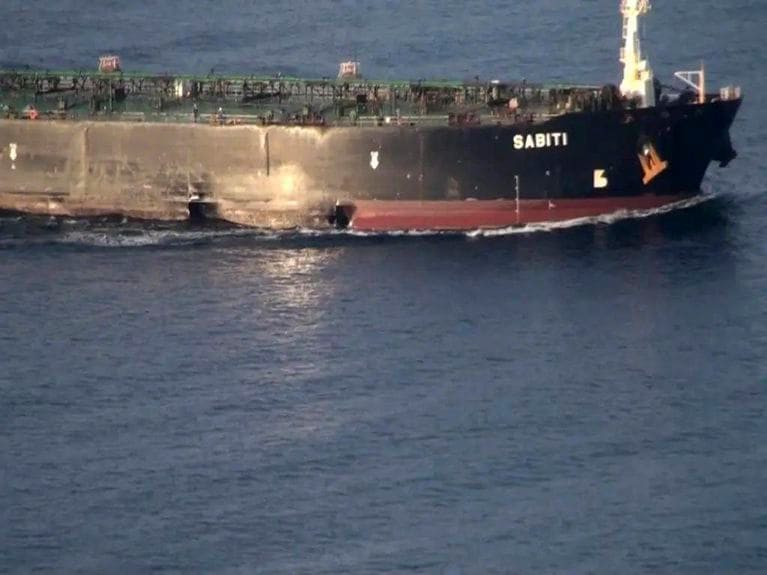 Who Is Behind The Iranian Tanker Attack?

If on October 10th a Saudi vessel had been struck by a missile in the Red Sea there is absolutely no doubt that US State and its major media outlets would immediately identify Iran as the culprit. So far, we’ve seen no hysteria from US State claiming that Iran was the source of the attack on the Sabiti tanker, originally claimed to be the Sinopa.

Despite a spreading oil spill related to the attack, according to the National Iranian Oil Company (NIOC), “No help was offered to assist by any country” even if Saudi Arabia claimed otherwise.  To the contrary, ship tracking service Marine Traffic wrote on twitter, “We do not see any smoke, fire, spills or tugboats. Instead, we see a tanker cruising home at a healthy speed”.

However, Iran’s foreign ministry spokesman Abbas Mousavi said in a statement, “The investigation, conducted by the National Iranian Tanker Company, shows that the Iranian tanker … was attacked twice, with an interval of around 30 minutes, and was damaged”.  And now we have photos of the ship’s damage to prove it.  Iran is still investigating the source of the attacks, has made no official statement regarding responsibility, and no one has claimed responsibility.

Since the Red Sea attack occurred near Jeddah, the temptation is to assume that Saudi forces were behind the attack. However, tanker rates are already sky high and the last thing Saudi needs is more turmoil in the Gulf, as the date for its ARAMCO IPO approaches. So, were the Saudi’s stupid enough to launch missiles from Jeddah to attack Iran’s oil tanker?  Even Iran has not proposed that. And we know that’s not the way the game is played. But who or whom does play the game that way?

In 1996 arch-nihilist and card-carrying Neocon Richard Perle led his worshipful entourage of cult followers to write the now-notorious document, “A Clean Break: A New Strategy for Securing the Realm” document under the auspices of the now-defunct Institute for Advanced Strategic and Political Studies.

The 1996 “Clean Break” document advocated regime change and destabilization in Iraq, Lebanon, Syria, Iran, and even Saudi Arabia. The IASPS “Clean Break” on Iraq in 1996:

“This effort can focus on removing Saddam Hussein from power in Iraq — an important Israeli strategic objective in its own right — as a means of foiling Syria’s regional ambitions.”

In other words, the 1996 IASPS document provided a blueprint for Nile-to-Euphrates adventurism led by Israel and the US as written for then-and-now Prime Minister of Israel, Binyamin Netanyahu.

To discover the origins of the Institute for Advanced Strategic and Political Studies and its history is an exercise in frustration, since little of substance is known about the origin of this shady organization. The leader of the group is alleged to be Robert Loewenberg, who postulates that “modernity replaces tradition, religion, and order with relativism, disorder, and nihilism.”

“Most important, it is understandable that Israel has an interest supporting diplomatically, militarily and operationally Turkey’s and Jordan’s actions against Syria, such as securing tribal alliances with Arab tribes that cross into Syrian territory and are hostile to the Syrian ruling elite

Syrian territory is not immune to attacks emanating from Lebanon by Israeli proxy forces. Striking Syrian military targets in Lebanon, and should that prove insufficient, striking at select targets in Syria proper.”

And: “Our claim to the land — to which we have clung with hope for 2000 years — is legitimate and noble. It is not within our own power, no matter how much we concede, to make peace unilaterally.”

Recall that the authors of this 1996 document held high political office and have maintained tremendous political influence during (and since!) the Bush 2 presidency, with some eclipse to their power overall, as we explored in Whither Next Neocons .  Likewise, Netanyahu, for whom the paper was written, is the longest serving Prime Minister of Israel.

Now, just subsequent to a US refusal to attack Iran after the downing of a Global Hawk RQ-4 Reaper, and claimed Iranian strike on Saudi oil fields, and the US withdrawal from northeastern Syria (noting Turkey’s incursion to finally confront the PKK/YPG as sponsored by the United States and Israel) an Iranian tanker has been mysteriously attacked in the Red Sea.

And that’s not the only mysterious attack. Since May, six other tankers have been mysteriously attacked with no state actor or terrorist group claiming responsibility. The tankers include:

Again, no state actor or group has claimed responsibility for any of these mysterious attacks, and there is only one state actor to fit that modus operandi bill. But why Israel?  Because Israel said so. Its operatives published their intent twenty-four years ago, and have held power in Washington ever since. Since then, what has changed? Netanyahu is still in power. The Neocons and Neoliberals still drive the US foreign policy bus in Washington.  ..and then Trump came to power.

Mr Trump has (so far) refused to hark the Neocon/Neoliberal mantra for war with Iran, and the call for new expanded wars in the Middle East. He even realized the serious error of hiring John Bolton, and fired him. Trump has now withdrawn a few troops from Syria, and promised to do the same in Afghanistan.  As a result, the push is on to impeach Donald Trump. Whistleblowers who were once prosecuted under Obama have come forward anew versus Trump, however they are now hailed as ‘heroes’ by the media, instead of imprisoned as Obama ordered. Even so, who truly holds the power behind the throne? Apparently Israel and its Neocon operatives, now as then. Just read the “Clean Break” document again, word for word, and concur that its mandate has been stubbornly pursued.

Thus, it is clear that Israel and the entrenched Statists in the Pentagon and Washington have lost their patience with Trump, despite the Jerusalem embassy move, the US gift of the Golan, and hedge fund tax breaks.

The above of course does not prove that Israel or Deep State subversives carried out the tanker attacks in the Gulf since May, but as Conan Doyle once wrote, “When you have eliminated the impossible, whatever remains, however improbable, must be the truth.”

Steve Brown is the author of “Iraq: the Road to War” (Sourcewatch) editor of “Bush Administration War Crimes in Iraq” (Sourcewatch) “Trump’s Limited Hangout” and “Federal Reserve: Out-sourcing the Monetary System to the Money Trust Oligarchs Since 1913”. Steve is an antiwar activist, a published scholar on the US monetary system, and has appeared as a guest contributor to The Duran, Fort Russ News, and Strategika51.