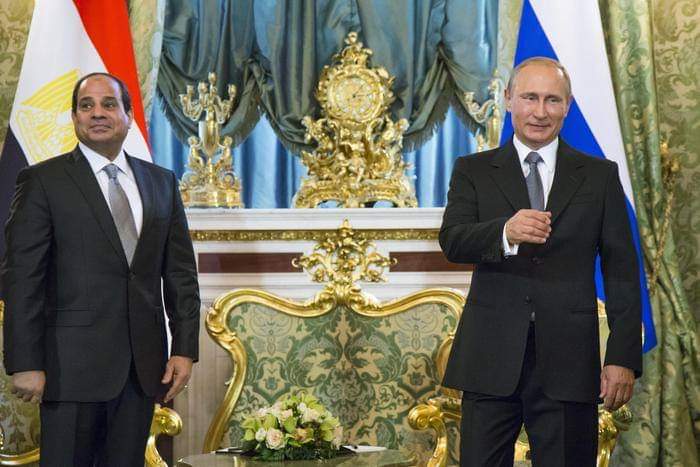 Heads of African countries have flocked to Russia for a first of its kind summit, where Moscow will be offering business ties and security arrangements alternative to ‘colonial-style’ relations with the West.

Over the past decade, the African continent has become a battleground for geostrategic competition involving China, the US, and the EU, which compete with each for military access, economic superiority, and soft power supremacy.

Countries like India, South Korea, and Gulf monarchies have interests in Africa too. So does Russia, which has the advantage of old ties in the region and touts itself as an ideology-free pragmatic partner that wouldn’t leverage its offers to extort geopolitical allegiances.

“We have something to offer our African friends. This, in particular, will be discussed at the upcoming summit. And of course, we aim, together with our African partners, to uphold common economic interests and protect them from unilateral sanctions, including by reducing the share of the dollar and switching to other currencies in mutual settlements,” Russian President Vladimir Putin said in a recent interview for TASS.

With that in mind the Russian leader will be hosting this week a two-day event meant to further that ambition. The Russia-Africa summit in Sochi expects over 3,000 guests, including 44 presidents and prime ministers of African nations.

It’s the first time in Russia’s modern history that it welcomes so many African dignitaries at once. Even the protocol part, which requires Putin to shake hands and exchange polite words with each visiting head of state, is expected to take at least an hour.

The Russian president will then be holding a marathon series of talks with at least a dozen of foreign leaders. Those include Egypt’s Abdel Fattah el-Sisi, who also co-chairs the gathering in his capacity as chair of the African Union. The bilateral talks are expected to extend beyond Thursday evening, when the summit itself ends.

The high-profile summit is a culmination of diplomatic efforts over the past several years meant to boost Russia’s presence in the region. Moscow believes there is much potential for growth in this area, especially when compared to other players. African nations’ trade with China, for example, stood at over $204 billion last year, compared to $20 billion with Russia. The US, the EU, India and even the relatively small economy United Arab Emirates were all ahead of Russia.

But Russian trade is rapidly growing, having almost tripled since 2010. It also already has a strong economic foothold in some African nations like Egypt, Algeria, Morocco, South Africa or Tunis, playing on its strong points.

For instance, one of the top Russian exports to Egypt is wheat. Russia transformed itself into a major crops producer and the world-leading exporter of wheat after the tit-for-tat sanctions war with the EU led to shutdown of Russian markets to European food products.

It gave a boost to the Russian agriculture sector, and led Moscow to search for new markets. It can also offer a lot of complimentary agriculture products, from fertilizers through combine machines and other equipment, to know-how which Russian farmers came up with during the surprise boom.

There is also the traditional article of Russian trade in Africa: weapons. Moscow currently has arms trade agreements with over 30 African nations. Egypt is about to launch license production of Russia’s advanced T-90 main battle tanks. Angola in April had received the last batch of the 12 upgraded Sukhoi Su-30K fighter jets, which it bought a few years ago. The Stockholm International Peace Research Institute (SIPRI) estimates that Russian sales of arms to African countries doubled between 2012 and 2017, with both the US and China falling behind.

Russia’s soft power on the rise

Russia has a less tangible edge over some of its competition in Africa, since it has no toxic historic colonial baggage. In fact, Soviet Union supported pro-independence movements throughout Africa as European nations were withdrawing from it. It was, of course, part of the Cold War ideological confrontation with Washington, but it built some goodwill that comes in handy today.

Last year some 17,000 students form more than 50 African nations were getting higher education in Russia, including 4,000, who won scholarships from the Russian government. Hundreds of others were sponsored by Russian companies investing in energy and mineral projects in Africa, which want a cadre of trained employees recruited from the local population.

Russia’s current influence in Africa, of course, is a far cry from what Soviet Union used to have at the peak of its power. And it’s not like Moscow wants to play a superpower overlord again. But it sees a place for itself as a power that African nations can turn to when it has problems it can’t solve on its own, be they domestic or foreign.

“What we aim for is not to ‘redistribute’ the riches of the continent, but competition for cooperation with Africa,” Putin said in the interview. “The important thing is that it stays civilized.”