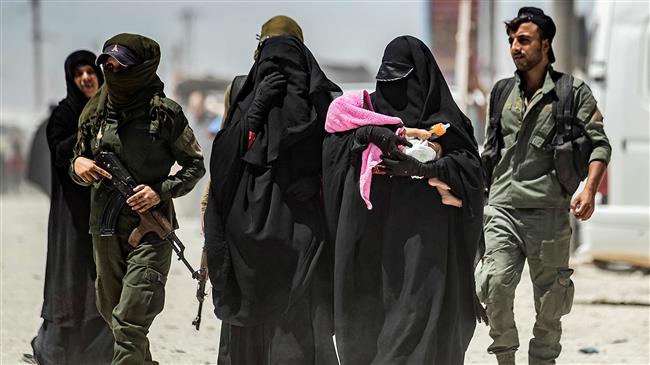 US military forces have reportedly transferred more than 1,500 female members of the Daesh Takfiri terrorist group from Syria to neighboring Iraq in the wake of a ground offensive by Turkish troops and their allied militants against Kurdish forces in northeastern Syria.

Syria’s official news agency SANA reported that the US troops have moved the Daesh women from al-Hol refugee camp, which lies in Syria’s northeastern province of al-Hasakah and close to the Syria-Iraq border,

The report came only a few days after SANA reported that US forces had transferred 230 foreign Daesh terrorists from al-Malikiyah prison to a detention center in al-Shaddadi town in southern Hasakah.

Since October 9, SANA said, US forces have transported hundreds of Daesh extremists and their relatives from Syrian territories to Iraq in six batches. The date is when Turkey and its allied militants launched a ground offensive against Kurdish forces in northeastern Syria.

According to the report, American forces have also turned their illegal base in Shaddadi, Hasakah, into a place of accommodation for Daesh terrorists and their families, who are being brought from al-Hol camp and prisons across Syria to the base in order to be transported on board military helicopters to Iraq.

US forces have been airlifting Daesh terrorists from one place in Syria to another, under the cover of darkness, in order to save them in the face of advancement and territorial gains by Syrian government forces, and prevent revelation of their alliance with the Takfiri extremists.

Turkish military forces and Ankara-backed militants launched the long-threatened cross-border invasion of northeast Syria in a declared attempt to push Kurdish fighters from the People’s Protection Units (YPG) away from border areas.

Ankara views the US-backed YPG as a terrorist organization tied to the homegrown Kurdistan Workers’ Party (PKK), which has been seeking an autonomous Kurdish region in Turkey since 1984. The YPG constitutes the backbone of the Kurdish-dominated Syrian Democratic Forces (SDF).

The Kurdish-led administration in northeastern Syria says the Turkish offensive has killed 218 civilians, including 18 children, since its outset. The fighting has also wounded more than 650 people.

Turkish authorities say 20 people have been killed in Turkey by strikes from Syria, including eight people who were killed in a mortar attack on the town of Nusaybin by YPG militants on October 11.

On October 17, US Vice President Mike Pence said Washington and Ankara had agreed on a five-day ceasefire in Turkey’s attacks on Kurdish fighters in the region.

The agreement followed negotiations between Pence and Erdogan at the presidential palace in Ankara.

Pence said Ankara would pause its offensive, dubbed Operation Peace Spring, for 120 hours in order to allow YPG militants to withdraw 30 kilometers from the Turkey-Syria border.

Once the withdrawal is complete, “Operation Peace Spring will be halted entirely,” Pence told reporters.