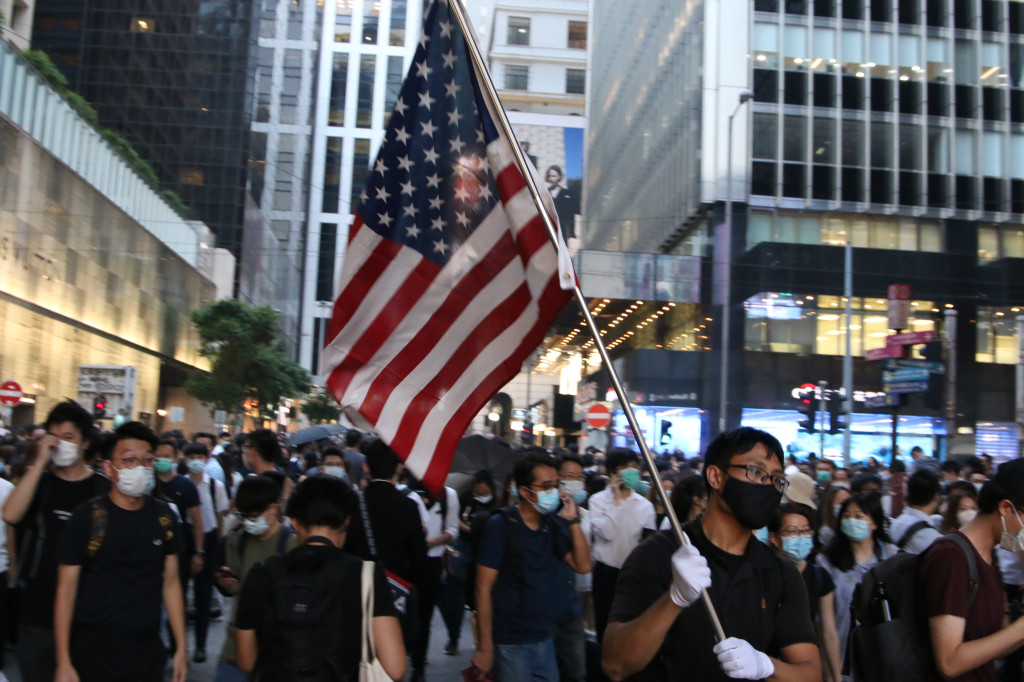 US Agitators in Asia “United” over Hong Kong Chaos

Despite the chaos created across Hong Kong, the vast majority of the region’s inhabitants do not support the growing violence nor do they benefit from it in any way.

As is typical in other regions of the world the US is meddling, a lack of local support is often remedied by attempting to create links and synergies between various US meddling in different nations.

During the 2011 Arab Spring the US literally imported terrorists and weapons it used in the overthrow of the Libyan government to Syria in an attempt to oust the government there.

In Ukraine, the US and its Ukrainian allies recruited right-wing extremists from around the globe to fill the ranks of “volunteer” Neo-Nazi militias.

Now in Hong Kong, similar synergies and ties are surfacing.

The Chinese embassy in Bangkok has condemned Thai politicians for showing support for Hong Kong activists involved in anti-government protests, saying it could harm the relationship between the two countries.

These “Thai politicians” belong to the US-backed opposition led by union-busting nepotist billionaire Thanathorn Juangroongruangkit and his patron, fugitive billionaire and ex-prime minister Thaksin Shinawatra along with their collective political machine.

Thanathorn said he was not involved with the Hong Kong protests. He also said he respected Hong Kong’s mini-constitution, known as the Basic Law, and supported freedom of expression.

“I have always supported people’s rights to peaceful self-expression. I wish to see the situation in Hong Kong resolve,” Thanathorn said in a Facebook post.

Thanathorn’s support for the Hong Kong opposition and their demands that the British-instituted “Basic Law” be upheld should come as no surprise.

Thanathorn himself along with is political party “Future Forward” have few well defined policies but those that are involve cancelling joint Thai-Chinese infrastructure projects including high-speed rail projects already under construction, as well as the cancellation of Thai-Chinese military arms deals and cooperation.

Thanathorn’s pro-Western stance is further reflected by the fact that his party hosts several “founding members” drawn from US government-funded fronts posing as nongovernmental organisations including “Prachatai” which poses as an “independent media platform” despite being funded and directed out of Washington and being headed by a literal “fellow” of the Washington-based US National Endowment for Democracy, Chiranuch Premchaiporn.

Thanathorn’s pro-Western stance has been rewarded repeatedly through extensive and positive coverage across the Western media as well as political support offered directly by Western embassies in Bangkok. Thanathorn is often accompanied by Western diplomats when summoned by police for his various criminal charges.

Wong’s ties to the US-backed opposition in Thailand didn’t begin with meeting Thanathorn. As early as 2016 Wong attempted to travel to Bangkok to attend activities led by Netiwit Chotipatpaisal who is for all intents and purposes simply a “Thai version” of Wong.

Netiwit has admittedly visited Western embassies and works in tandem with US-funded fronts like “Thai Lawyers for Human Rights” and Thanathorn’s Future Forward Party in their collective efforts to destabilise Thailand politically, undermine the military and constitutional monarchy and roll back Thai-Chinese relations.

Netiwit has repeatedly protested in front of the Chinese Embassy in Bangkok on the anniversary of the Tiananmen unrest.

An article by above mentioned US government-funded media front Prachatai titled, “Student group gathers in front of Chinese Embassy in memory of Tiananmen massacre,” claims:

The student group, calling themselves “Humanity Without Borders”, was led by Netiwit Chotiphatphaisal and Sirin Mungcharoen, both students at Chulalongkorn University. The group placed white flowers in front of a printout of a tank, and observed a moment’s silence in memory of the dead.

While Netiwit is fond of protesting in front of the Chinese Embassy over events that transpired before he was even born, he regularly visits the embassies of the US and UK for dinner parties even as both nations currently and illegally occupy, bomb, drone and otherwise destroy multiple nations around the globe at the expense of tens of thousands of human lives.

Thanathorn, Wong and Netiwit represent the same corrosive form of synergistic foreign-sponsored opposition that has eaten its way through North Africa, the Middle East and Eastern Europe. While they claim they are bound by their dedication to democracy and human rights, the true thread running through all of their movements and agendas is US political support and their troubling hypocrisy for accepting this support.

Reuters notes that the current Thai government condemned the Thai opposition’s meddling in China’s affairs and considers the Hong Kong unrest an internal affair for Beijing alone to resolve.

In an attempt to undermine the credibility of the Thai government’s statement on Hong Kong, Reuters refers to the 2014 military coup in which the Thai military ousted what Reuters describes as an “elected government.” This is meant to paint the Thai government as a “dictatorship” and depict its recognition of and respect for China’s sovereignty as instead solidarity between it and the “authoritative regime” in Beijing.

Yet in reality the government removed from power in 2014 by the Thai military was openly run by Thaksin Shinawatra who resided abroad as a fugitive and ruled via his nepotist-appointed sister Yingluck Shinawatra. Before the Thai military intervened, the Shinawatras had robbed nearly a million rice farmers and were killing protesters in the streets, all facts repeatedly and intentionally omitted by media organisations like Reuters.

The Reuters article also tries to sidestep US involvement in Hong Kong’s unrest, depicting it instead as merely claims made by Beijing. Yet extensive documented facts and even admissions from US officials confirms the US has spent millions of dollars building up Hong Kong’s opposition and fuelling unrest there.

All About Isolating China

It takes little effort to find the common denominator between the Thai and Hong Kong opposition and why they feel such affinity for one another. They are united by their US sponsorships and their collective agenda of undermining China’s rise upon the regional and global stage, an agenda originating in Washington itself.

Thanathorn of Thailand’s “Future Forward Party” has specific policies focused on rolling back deepening Thai-Chinese relations while Thai “student activists” like Netiwit openly and regularly protest against China in between dinner dates at the US and UK embassy.

Wong’s efforts to destabilise Hong Kong is a much more obvious and direct effort to target Beijing, its sovereignty over its own territory and its image globally.

Together this army of regional agitators openly cooperates in advancing what is essentially an extraterritorial agenda originating thousands of miles away in Washington. While these opposition figures claim they are dedicated to “democracy,” they seem to forget that democracy is a process of self-determination, not a process of having one’s agenda determined for you in a foreign capital.

While these opposition figures claim to be dedicated to “human rights,” bemoaning claimed offenses carried out by the Chinese government, they click wine glasses at embassy events together with representatives of the worst human rights offenders of the 21st century. The US invasion of Iraq in 2003 and current US-British support for Saudi Arabia in its war on Yemen come immediately to mind.

China may be the target today but Thailand’s government must ensure that the contagion of US-fuelled unrest doesn’t backwash into Thailand itself. Figures like Thanathorn have repeatedly alluded to aspirations of creating chaos similar to that consuming Hong Kong within Thailand. His political allies led by Thaksin Shinawatra have already twice attempted to burn down Bangkok (2009 and 2010) and have killed over 100 people in politically-motivated violence and acts of terrorism from 2006 onward.

Whether we believe or not Thanathorn, Wong and Netiwit truly stand for the principles they claim to represent, one thing is absolutely certain; their counterparts in North Africa, the Middle East and Eastern Europe who have led Western-backed “pro-democracy struggles” have left a trail of destruction, failed states, war, economic collapse and persistent instability negatively impacting the lives of millions. There is no “success story” for Thanathorn, Wong or Netiwit to cite when advocating others to join their cause across Asia.

China regaining control over Hong Kong will be key to ensuring wider regional stability. Chinese allies like Thailand reining in domestic agitators trying to fuel or support Hong Kong’s unrest will be key to not only restoring stability inside China, but key to preventing the same unrest plaguing Hong Kong from spreading outward to nations like Thailand.

The original source of this article is New Eastern Outlook