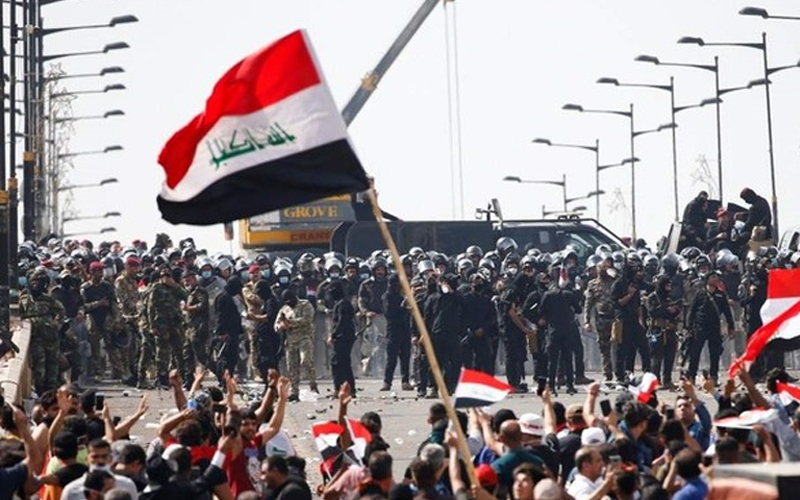 A leading Lebanese newspaper revealed the role played by the US embassy in the October protest rallies in Iraq which turned violent. The Arabic-language al-Akhbar paper wrote on Saturday that it has gained access to a security document that shows the US mission’s role in organizing a secret formation to add fuel to the flames of unrest in Iraq last month.

According to the newspaper, the US embassy has formed a high committee of protests, which coordinated field activities during the protests and the embassy provided it with intelligence and a number of politicians and government workers supported it.

A psychological operations team to guide the media and spread rumors, an electronic mobilization team to lead people through social media, a team, trained in Erbil and Amman, to report on the security services’ mistakes and produce fake news on the protests, a team to exert international pressures on the Iraqi government, to organize protests in front of Iraq’s embassies in foreign states, a team for releasing reports about the protest rallies in cooperation with different media outlets, an IT team to resolve problems related to filtering of the internet and social media, a medical team stationed near the protestors and hospitals to help the wounded and a team to provide logistical support, including food, water and preliminary aid, to the protestors were also formed by the US embassy’s secret committee to foment unrests in Iraq, al-Akhbar added.

In relevant remarks earlier today, a senior Iranian political analyst warned that the recent violent unrest in Iraq and Lebanon was being misused by certain foreign states to turn the people’s peaceful protests for restoring their legal rights into the ground to attain their ominous goals.

“The main purpose of protests in Iraq, Lebanon, Tunisia, Algeria and even Sudan was protesting at the financial and administrative corruption,” Seyed Hadi Seyed Afqahi told FNA.

He added that the protest rallies in the regional states had two dimensions; one is the protests of average citizens and ordinary people and unions for their living difficulties and expenses; on the other side of the protests the foreign hands can be seen and they want to misuse the rallies of people to their own benefit.

“Unfortunately, we see this ugly phenomenon in Lebanon and Iraq too. People in Lebanon have held peaceful protests and the government has heard the people’s voice but a series of norm-breaking images were displayed and slogans were shouted in the protests that turned them into political rallies,” Seyed Afqahi said.

The protests in Iraq that started early in this month subsided after the public get engaged in holding the annual massive march of Arbaeen, but restored on Friday after religious rituals of the second month of the Islamic calendar were over.

In the first round of public protests 3 weeks ago, analyses revealed that 79% of hashtags about protests in Iraq on Twitter originated from Saudi Arabia and only 6% were from Iraq, in stark contrast with claims that the demonstrations were popular and spontaneous.

Iraq’s Grand Ayatollah Seyed Ali Sistani warned against the infiltration of agents with malevolent intentions into public protests in the Arab country, calling upon demonstrators and security forces to keep anti-occupation rallies peaceful.

“Don’t let those with vicious intentions to infiltrate among you and attack security forces,” the official representative of Ayatollah Sistani in Iraq Abdul Mahdi al-Karbalai said on Friday, conveying a message of the senior cleric.

He added that public protest is a right enshrined in the Constitution, and warned that, however, protests should not be used as a pretext for vandalizing public properties or injuring security forces.