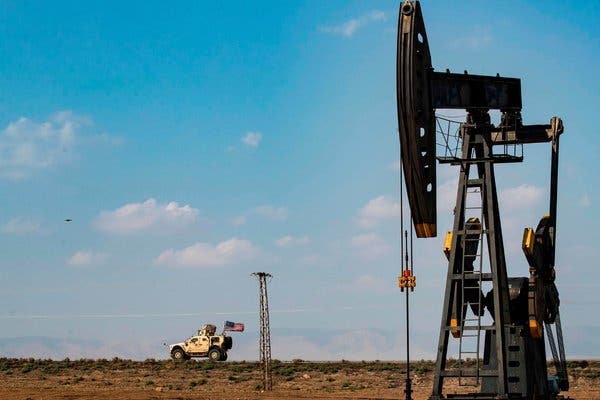 U.S. Defense Secretary Mark Esper explained in a press conference Tuesday, that a new U.S. force will be stationed in eastern Syria to protect the oil fields.  Barbara Starr, CNN’s Pentagon reporter, pressed Esper on whether the US military mission there will be to prevent the Russian or the Syrian government forces from accessing the oil at Deir Ez Zor.  Esper was forced to admit that the mission was designed to prevent the oil, and revenues generated, from being used by any group other than the Syrian Democratic Forces (SDF), otherwise referred to as the Kurdish militia who had been US allies in the fight to defeat ISIS.

Retired General Barry McCaffrey questioned whether the US has stooped to piracy, and stressed that Syria owns the oil in Deir Ez Zor. “International law seeks to protect against exactly this sort of exploitation,” said Laurie Blank, an Emory Law School professor and director of its Center for International and Comparative Law.  “It is not only a dubious legal move, it sends a message to the whole region and the world that America wants to steal the oil,” said Bruce Riedel, a former national security advisor and now a senior fellow at the Brookings Institution think-tank.

“We’re out. But we are leaving soldiers to secure the oil. And we may have to fight for the oil. It’s OK. Maybe somebody else wants the oil, in which case they have a hell of a fight. But there’s massive amounts of oil,” President Trump said Sunday morning, after announcing Baghdadi’s death.

“We’re keeping the oil,” President Trump told a gathering in Chicago on Monday. “Remember that. I’ve always said: Keep the oil. We want to keep the oil – $45 million a month. Keep the oil.”

“What I intend to do, perhaps, is make a deal with an ExxonMobil or one of our great companies to go in there and do it properly … and spread out the wealth,” President Trump said during a news conference.

Syria produced around 400,000 barrels of oil per day before the war from numerous fields scattered around the country. An IMF paper in 2016 estimated that production had slipped to just 40,000 barrels per day.

Defense officials stress the military objective is to keep ISIS from using the Deir Ez Zor oil resources to finance a possible resurgence, rather than the US looting resources in Syria for their own benefit, which would bring back memories of President George W. Bush and VP Dick Cheney in Iraq plundering the profits of one of the largest oil producers in the world, and President Obama looting the Libyan oil fields.

U.S. National Security advisor, Robert O’Brien, said “We’re going to be there for a period of time to maintain control of those and make sure that there is not a resurgence of ISIS and make sure that the Kurds have some revenue from those oil fields,” while speaking to NBC News’ Meet the Press with Chuck Todd.

President Trump was in a hurry to make good on a campaign promise of 2016, as his current 2020 campaign is mired in daily scandals and revelations relating to impeachment investigations.  Trump announced he was ordering his troops home from northeast Syria, ahead of a planned Turkish invasion to push back a Syrian militia made up of Kurds who have been on the US payroll, allied with the US troops had fought and defeated ISIS in the 2014-2019 period.  Turkey had made their case known for years that they would not tolerate Kurdish armed terrorists on their border, regardless of the Kurds being US allies.  Turkey also considers itself to be a US ally, though they did not participate alongside the US in the fight against ISIS.

“It would mean walling off eastern Syria as a US zone,” said Aaron Stein, the director of the Middle East program at the Foreign Policy Research Institute in Washington. Analysts have said for 8 years that one of the strategic goals of the US-NATO attack on Syria, beginning in March 2011, was the ultimate partitioning of the country into small states grouped by sect and ethnicity.  The current statements by Esper, support the position that the US has not abandoned the idea of a Kurdish homeland, ‘Rojava’, and are identifying a source of income for their administration.

President Trump’s sudden decision took the US military, politicians and international leaders by surprise.  It now appears he is doing some back-tracking on his plan and has announced on Friday he is sending US troops and equipment  back into Syria, but this time it is about a business deal: “…what we are getting out of the deal, I simply say, THE OIL,…”, he wrote on Twitter.

Jan Egeland, the head of the Norwegian Refugee Council and the UN’s former humanitarian chief, said “We need to remind all of these people with the power and the guns that this is no chessboard. It is a place where people live.”  Deir Ez Zor is almost entirely populated with Sunni Arabs, who would not accept a sudden demographic shift to Kurds and their US occupying allies.  Even if the US military and their SDF allies take control of the oil and gas fields there, the local population would most likely form into resistance militias which could end up sending US soldiers home in a coffin or injured.

A Russian Defense Ministry spokesman, Major General Igor Konashenkov said, “Neither international law, nor the U.S. legislation, nothing can set any legitimate objective for U.S. troops to guard and defend Syria’s hydrocarbon deposits from Syria itself and its people,”

All eyes will be on Deir Ez Zor, for a possible showdown between Syria and their Russian ally, in a face-off against the US military to recover Syrian oil.